Daily Brief, August  – Everything You Need to Know About Gold Today!  - Forex News by FX Leaders 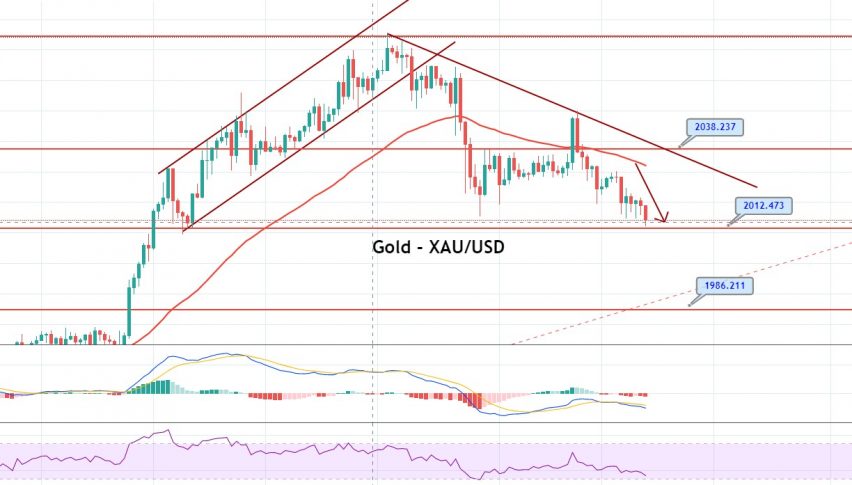 Daily Brief, August  – Everything You Need to Know About Gold Today!

Gold prices extended the previous day’s losses and moved in a bearish trend, due to the comeback of the US dollar, which rose to a one-week high on Monday, exerting pressure on the safe-haven yellow metal. Meanwhile, investors were awaiting an agreement on a US relief bill to help the economy to recover from the pandemic crisis.

The US Dollar Index, which measures the value of the greenback against the six competing currencies, rose by 0.13% to 93.54 on Monday, weighing on the precious metal. On Friday, the DXY rose by 0.7%, its highest one-day gain since June 5.

The rise in the dollar was driven by the investors’ focus, which shifted more towards the US aid package and the US-China meeting on August 15, as the tensions between the two countries have escalated lately.

However, on Monday, Gold received little support from the comments by US Treasury Secretary Steven Mnuchin, who said that an agreement could be reached on a relief bill this week. But Mnuchin declined to provide information about when the talks for the passing of the US aid package would resume, and this weighed on gold, erasing its gains.

The gold prices have surged by about 34% this year, on the back of mounting numbers of coronavirus cases across the globe, and this has battered the global economies and prompted extraordinary stimulus measures.

According to Johns Hopkins University, the total number of coronavirus cases in the US passed the 5 million mark on Sunday, just 17 days after hitting the 4 million mark. The daily reporting of cases in the US amounts to 54,000 and the deaths to 1,000 a day. More than 40 percent of cases from the US have been reported from just five states: California, Florida, Texas, New York and Georgia.

On the US-China front, the Governor of China’s Central Bank said that China would continue to implement its part of the Phase 1 trade deal with the US on Monday. He gave his assurance that they would fulfill financial opening-up pledges, despite worsened bilateral relations between the two countries.

The US Trade Representative, Robert Lighthizer, and the Treasury Secretary, Steven Mnuchin, are expected to hold a video conference with Vice-Premier Liu He this week, to review the implementation of the Phase 1 trade deal.

China’s intention to fulfill the promises made in the phase-one trade deal reflects its efforts to keep US-China relations from sliding further into a confrontation. The deal that was signed in early January requires China to increase the purchases of US farm products and services significantly, and to enhance the intellectual property rights projection.

China is trying its best to play its part in lessening the tensions between both countries, and this is weighing on the safe-haven appeal, which, in turn, caused gold to suffer on Monday.

On the vaccine front, the vaccine developed by CanSino Biologics in China, which produced an immune response in earlier trials, will also be tested in Saudi Arabia. The Saudi government announced that it has planned a human trial of China’s CanSino virus vaccine on at least 5,000 volunteers.

The Health Ministry of Saudi Arabia said that the trials would be conducted in Riyadh, Mecca and Dammam, with one group of participants receiving a low dose and the other a placebo.

The Chief Scientist of the WHO, Dr. Soumya Swaminathan, praised the global efforts in the development of a COVID-19 vaccine. She said that almost 200 vaccines were being developed around the globe, with some already in the clinical or pre-clinical development stage. She also said that clinical trials on human beings have now begun with about 24 vaccines.

The unprecedented global efforts to develop a coronavirus vaccine have triggered the risk-on market sentiment and are weighing on the gold prices.

On the data front, the US JOLTS Jobs Openings for June came in at 5.89 M against the projected 5.30 M, supporting the US dollar, and ultimately adding more pressure to the declining gold prices on Monday.

The precious metal is on the verge of a selling trend, having fallen from the 2,020 level, and it seems to be violating the support level of 2,015. If this happens, the odds of gold falling further, down to the 2,000 mark, are highly likely. The RSI and MACD of gold are already in the selling zone. On the higher side, resistance remains at the 2,025/29 level. The bearish bias remains strong today.