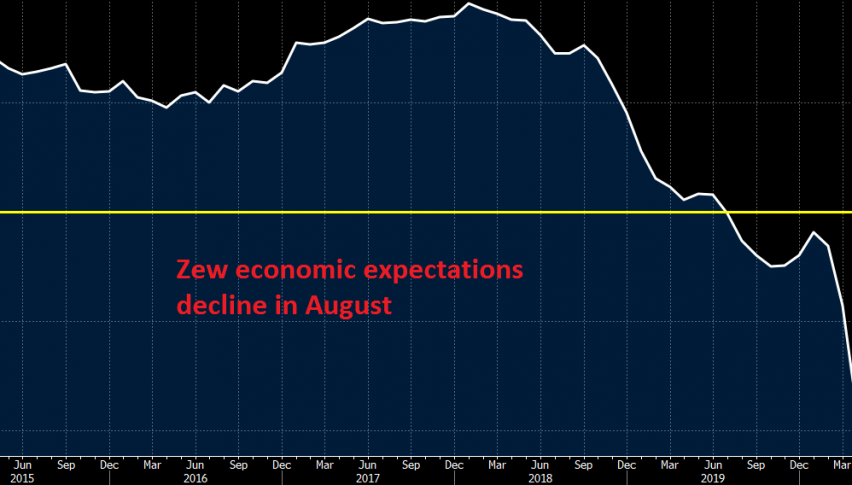 Economic Expectations Pick up in Europe, But the Current Reality Doesn’t Look Good

The trend is not improving

The economic sentiment turned massively negative in Europe during the lock-downs. Expectations for the future also fell really low into negative territory. The economic sentiment for the time being has been increasing since April and today’s report showed another improvement to 71.5 points. But expectations remain largely negative and today they dived even lower, despite another improvement in the current situation. Below is the Zew report:

Slight delay in the release by the source. The headline reading pretty much underscores the fact that the economic recovery is largely tepid and not really growing at the pace most optimists would’ve hoped over the past few months. Despite another jump in the expectations component, it is once again perhaps a case of survey respondents hoping for the better but the underlying economic situation is failing to live up to that perception in the second-half of the year.

In other words, another economic sentiment survey, another tick for poorer recovery conditions, yet another tick for a growing chorus of a better recovery ahead. For how long can that economic distortion keep up? ZEW says that hopes of a speedy economic recovery continue to grow and experts expect to see a general recovery, especially in the domestic sector, but the assessment of the current situation is only improving rather slowly.
Check out our free forex signals
Follow the top economic events on FX Leaders economic calendar
Trade better, discover more Forex Trading Strategies

Skerdian Meta // Lead Analyst
Skerdian Meta Lead Analyst. Skerdian is a professional Forex trader and a market analyst. He has been actively engaged in market analysis for the past 11 years. Before becoming our head analyst, Skerdian served as a trader and market analyst in Saxo Bank's local branch, Aksioner. Skerdian specialized in experimenting with developing models and hands-on trading. Skerdian has a masters degree in finance and investment.
Related Articles
Weekly Outlook, Apr 19 - 23, 2021: Top Economic Events to Watch This Week
The broad-based U.S. dollar will end this week on the bullish track as market investors have preferred the safe-haven assets in the wake...
6 hours ago