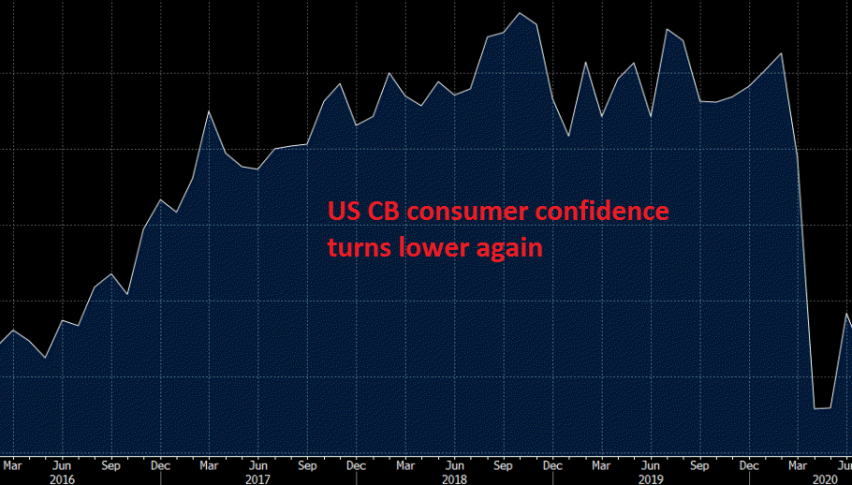 US Consumer Confidence Dives in August

The improvement is over for the consumer confidence

As all other sectors of the global economy fell in deep recession during the lock-downs, the sentiment also deteriorated among consumers. But, the sentiment started improving again as the world reopened and US CB consumer confidence indicator headed towards 100 points in June, after falling to 85 points in April and May.

But it started turning lower again in July, falling to 92.6 points, which was revised lower, while this month’s report showed a further decline below 85 points. So, the sentiment is deteriorating pretty fast once again, as the protests and the end of the weekly cash payments have made citizens think twice about buying stuff.

US consumer confidence for August 2020

This is a big surprise to the downside and shows the impact of expired stimulus payments.
“Consumer Confidence declined in August for the second consecutive month,” said Lynn Franco, Senior Director of Economic Indicators at The Conference Board. “The Present Situation Index decreased sharply, with consumers stating that both business and employment conditions had deteriorated over the past month. Consumers’ optimism about the short-term outlook, and their financial prospects, also declined and continues on a downward path. Consumer spending has rebounded in recent months but increasing concerns amongst consumers about the economic outlook and their financial well-being will likely cause spending to cool in the months ahead.”
The ‘plans to buy within six months’ measures of autos, homes and major appliances all fell sharply and are below year-ago levels. That suggests that consumers may have seen low interest rates and stimulus payments as a one-time windfall to capitalize on, pulling forward some nascent demand.
Check out our free forex signals
Follow the top economic events on FX Leaders economic calendar
Trade better, discover more Forex Trading Strategies