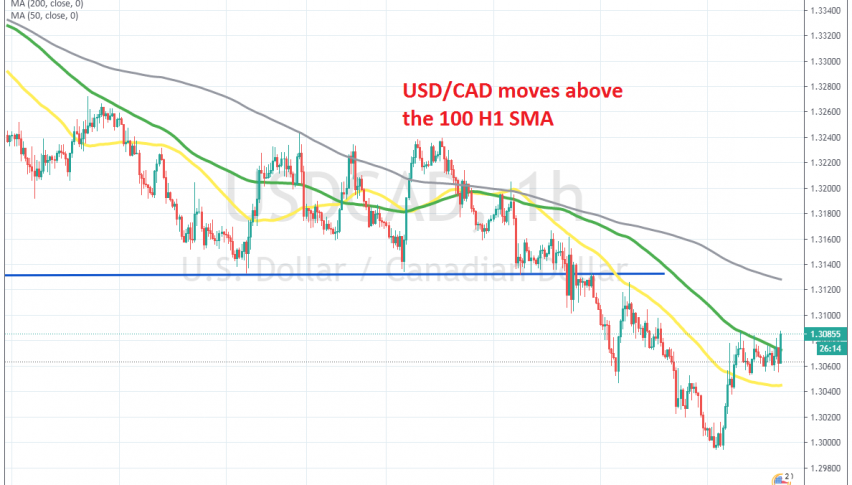 The first resistance is now gone

USD/CAD has been on a bullish trend since March, after surging 15 cents higher in the previous few weeks. There have  been three reasons for the decline in USD/CAD, which has lost around 17 cents from top to bottom during this time, with the main reason being the tumble in the USD.

The second reason is the improving sentiment for risk assets such as commodity dollars, while the third reason is the bullish trend in crude Oil since April. USD/CAD fell below 1.30 on Tuesday morning, but then reversed back up that same day and closed at around 1.3070.

So, the break of 1.30 didn’t count and the price formed a small hammer candlestick on the daily chart down there, which is a bullish reversing signal. But, buyers ran into the 100 SMA (green) in the afternoon, which was keeping the price below since then.

Although, that moving average was broken eventually a while ago, as the USD attracted another wave of fresh bids, after the ADP employment report, which missed expectations. So now, the road is open for buyers to push to the 200 SMA (grey) which is standing 50 pips higher.

Skerdian Meta // Lead Analyst
Skerdian Meta Lead Analyst. Skerdian is a professional Forex trader and a market analyst. He has been actively engaged in market analysis for the past 11 years. Before becoming our head analyst, Skerdian served as a trader and market analyst in Saxo Bank's local branch, Aksioner. Skerdian specialized in experimenting with developing models and hands-on trading. Skerdian has a masters degree in finance and investment.
Related Articles
Weekly Outlook, Apr 19 - 23, 2021: Top Economic Events to Watch This Week
The broad-based U.S. dollar will end this week on the bullish track as market investors have preferred the safe-haven assets in the wake...
5 hours ago

Canadian Dollar Starting to Lose Momentum, Approaching US $.80
2 days ago