EUR/USD Now Facing the 20 Daily SMA, After the Swift Reversal From 1.20 - Forex News by FX Leaders 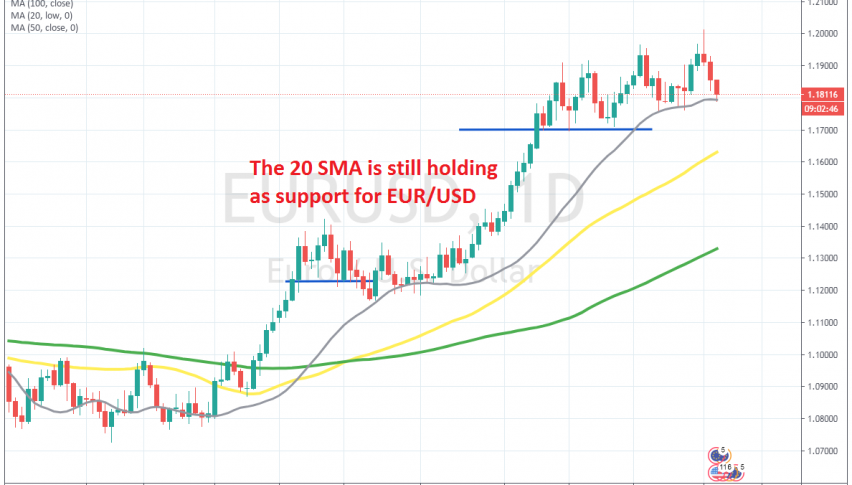 EUR/USD Now Facing the 20 Daily SMA, After the Swift Reversal From 1.20

Let's see if the 20 SMA will be broken now

The Euro has been bullish for several months, while the USD has been bearish, as the uncertainty remains pretty high in the US, which has hurt the sentiment surrounding the USD. As a result, this forex pair climbed around 13 cents since May.

Although, the sellers were closing their trades below 1.20, as the several reverses down on the daily chart show. But, EUR/USD formed a support area above 1.17 initially, which held twice during retraces lower. Then the 20 SMA (grey) caught up with the price on the daily chart and it turned into support immediately.

This moving average has been holding as support for EUR/USD in several attempts and on Tuesday the price bounced higher after failing to break below it, pushing above the big round number at 1.20. But, buyers couldn’t hold above it, which tells us that 1.20 was the big target and now we are seeing a quick reversal lower.

But, buyers are facing the 20 SMA (grey) on the daily chart. If this moving average gets broken now, then 1.17 will be the next target for sellers. The 20 SMA is rejecting the price right now, but there’s not much of a bounce, so the 20 SMA seems in danger. The daily chart points to further downside for EUR/USD, after the upside-down hammer candlestick on Tuesday and the two following bearish candles, but the 20 SMA will have to go first.