The Range Narrows for US Crude Oil, As it Gets Squeezed Between MAs - Forex News by FX Leaders 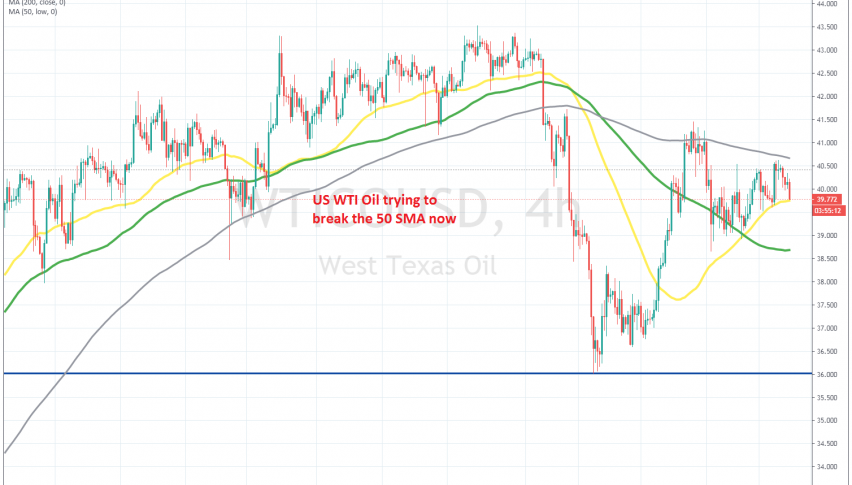 The Range Narrows for US Crude Oil, As it Gets Squeezed Between MAs

The triangle should be broken soon in Oil

Crude Oil turned lower at the beginning of September, after it had been on a bullish trend since the middle of April, when WTI crude fell to -$37.50 at the height of the coronavirus lock-down crisis. During the bullish trend, moving averages were doing a good job providing support on the H4 chart, as shown above.

But, the break came at the beginning of September, as the USD reversed higher, following months of decline, while Oil lost momentum as the hurricane season began in the US. US WTI crude Oil lost more than $7, falling from $43.50 at the top, until $36, which used to be support and resistance before.

But that level which used to be support and resistance before, held once again and the price bounced higher. Although the 200 SMA (grey) turned into resistance now and it rejected the price, despite being pierced a few times. The 50 SMA (yellow) turned into support on the other hand, pushing the price higher, so now WTAI crude Oil is stuck between these two MAs. The price has turned back down to the 50 SMA now, so it seems like this moving average will be broken soon.

MAs Keep the Downtrend Going in Gold
2 days ago
Comments