European Retail Sales Increased in August, Improving the Sentiment for the Euro

The economic rebound in Europe started slowing down in July, after some decent increases during May and June. In September, services fell into contraction in major European countries, although the second estimate today revised German manufacturing higher, putting it back into expansion.

Retail sales turned softer in June, after the jump in May, and in July they declined by 1.3%, which was revised lower today, to -1.8%. But, for August, sales increased by 4.4%, beating the expectations of 2.4%. The EUR/USD turned higher after that, climbing around 50 pips, but we will have to see more data, to find out whether the economic rebound has really faded now. Below is the retail sales report:

The rebound in retail sales activity was stronger than expected in August, after the slight slump in July, owing to a sharp surge in online purchases and clothing sales. At least that is encouraging to note, in terms of consumer spending in the region. However, we’ll have to see how the trend looks towards the end of Q3 and in the early stages of Q4, in order to determine whether the recovery can keep up the pace. 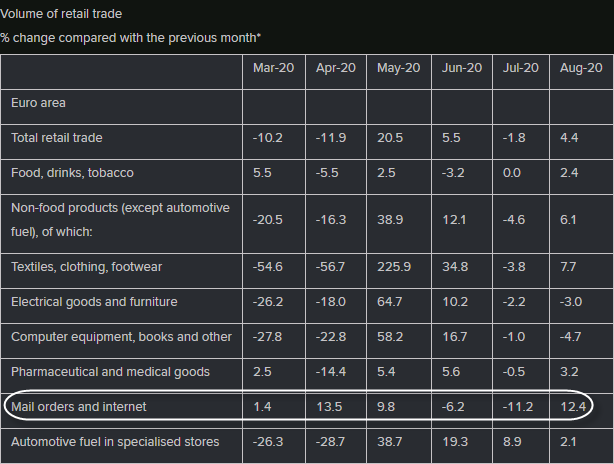