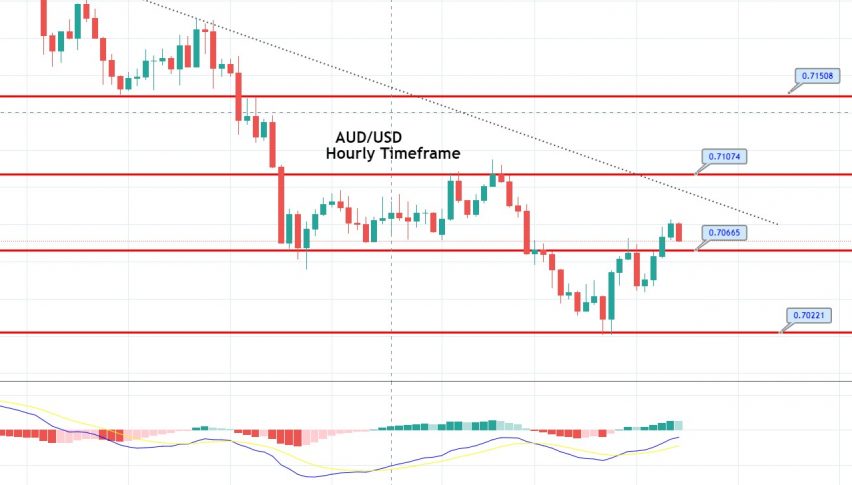 The AUD/USD pair closed at 0.70477, after placing a high of 0.70722, and a low of 0.70205. Overall, the movement of the AUD/USD pair remained bearish throughout the day. The AUD/USD pair dropped for the 4th consecutive day on Tuesday, reaching its lowest level since September 25, amid the suggestion of further monetary easing  by Australia’s central bank.

The AUD/USD pair was down by 0.5% on Tuesday, as the minutes of the RBA’s most recent meeting showed that the central bank had discussed further monetary easing by cutting interest rates closer to zero and increasing the longer-dated government bonds purchases. The record increase in the number of coronavirus infections in Europe and the stalled US stimulus talks raised uncertainty in the market and caused the risk sentiment to fade, putting pressure on the Australian dollar, which is perceived as risky.

On the data front, the Building Permits from the US for September rose to 1.55M, against the projected 1.52M, supporting the US dollar and putting further pressure on the AUD/USD pair. The Housing Starts from September capped any further downside in the AUD/USD pair, when it declined to 1.42M, against the projected 1.45M. From the Australian side, the CB leading index for August came in at 0.8%, compared to the previous -0.3%.

The losses in the AUD/USD pair on Tuesday were further supported by the strength of the US dollar, which was, in turn, supported by the rising uncertainty over the US stimulus package. The much-awaited relief package deal was not delivered, as US House Speaker Nancy Pelosi and Treasury Secretary Steven Mnuchin failed to reach an agreement within the 48-hour deadline imposed by Nancy Pelosi.

Pelosi stated, after talks, that both sides wanted to compromise and move closer to reaching an agreement. The mixed statements raised uncertainty and boosted the US dollar, due to its safe-haven status, weighing on the AUD/USD pair on Tuesday. White House Chief of Staff Mark Meadows reported that House Speaker Nancy Pelosi was reluctant to agree on anything less than $ 2.2 trillion or $ 2.4 trillion, and that she was the reason behind the stalled talks. These statements, along with the RBA’s move to look towards cutting rates, further weighed on risk sentiment ultimately dragging down the AUD/USD pair – which is perceived as risky – on Tuesday.

The AUD/USD pair slipped sharply, to place a low at the support level of 0.7022, but soon it bounced off again, to trade at the 0.7065 level. On the higher side, the continuation of the bullish trend could lead the AUD/USD price towards the next target level of 0.7107. The RSI and MACD suggest a neutral bias; however, we can expect some selling below the 0.7107 level today. The idea is to sell below 0.7107 or to buy over the 0.7047 level. Good luck!