GBP/USD Falls to the 20 SMA, as Brexit Talks Get Postponed Again - Forex News by FX Leaders 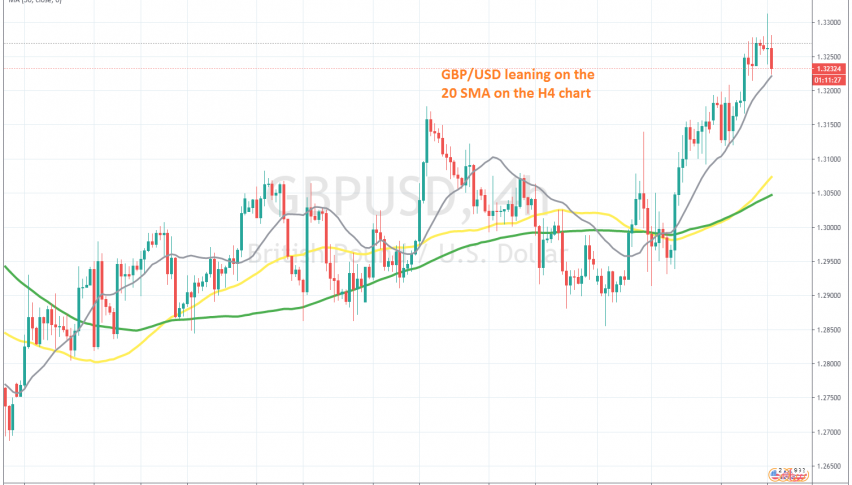 GBP/USD Falls to the 20 SMA, as Brexit Talks Get Postponed Again

Is the pullback down over?

The GBP has turned bullish recently, after being pretty bearish in September and October, due to the Brexit problem coming back into the spotlight, after the attention was all on coronavirus until August. The vaccine news also helped the GBP climb higher, since the benefits to the UK economy would be great, given the major negative impact the lockdowns are having.

So, the GBP/USD has been bullish, and moving averages have been providing support, with the 20 SMA taking over that job this week. The price is back down to this moving average now, after comments from Ireland’s Coveney, that the Brexit talks will be pushed again.

This just reaffirms the earlier story that the mid-November “deadline” has now been pushed to late November instead. And so the saga continues… We might open a buy forex signal here at the 20 SMA (gray), but will see if we can get a bullish reversing signal on smaller time-frame charts.
Check out our free forex signals
Follow the top economic events on FX Leaders economic calendar
Trade better, discover more Forex Trading Strategies

Gold Resumes the Downtrend, As the 20 SMA Pushes It $ 25 Lower
10 hours ago
Comments