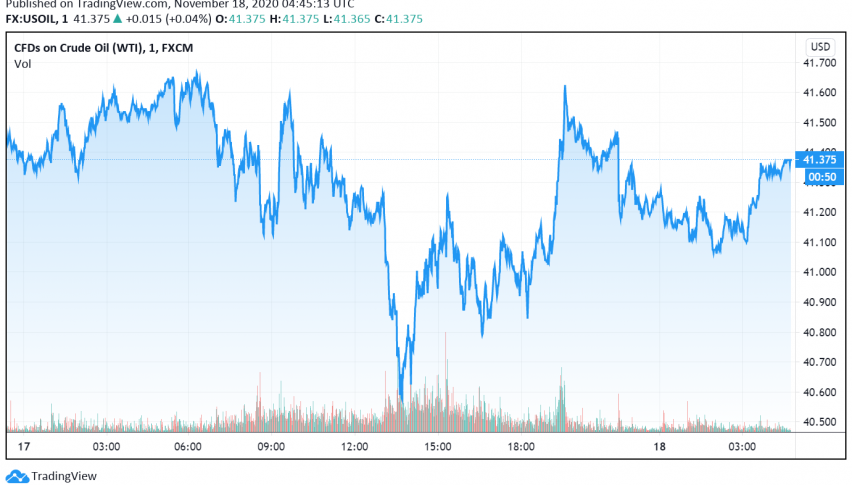 WTI crude oil prices are trading bearish into Wednesday after the release of the API report in the previous session revealed a larger than expected build-up in US crude inventories over the past week. At the time of writing, WTI crude oil is trading at around $41.37 per barrel.

On Tuesday, the API reported a build of 4.2 million barrels in crude stockpiles in the US over the previous week. Analysts had forecast a smaller build of 1.7 million barrels instead. The data raised concerns about weak demand due to the growing number of coronavirus cases in the country, driving weakness in oil prices.

However, losses in crude oil remain controlled over hopes that OPEC and its allies could continue the deeper supply cuts into next year instead of ending them by December 2020. The recent resurgence in fresh infections across several parts of the world are once again weighing on oil demand and could convince leading oil producing nations to curb production for longer than previously planned.

Saudi Arabia has already highlighted concerns about weak oil demand to other OPEC+ countries and called for greater flexibility in trying to balance this by adjusting supply accordingly. The OPEC+ meeting which concluded on Tuesday failed to make any official announcement about extending supply cuts, but sources have indicated interest in delaying the proposed 2 million bpd increase beyond January.

Forex & Commodities Trading Levels to Watch on Monday
9 hours ago