Anyone Buying the Pullback in Crude Oil at the 20 SMA? - Forex News by FX Leaders 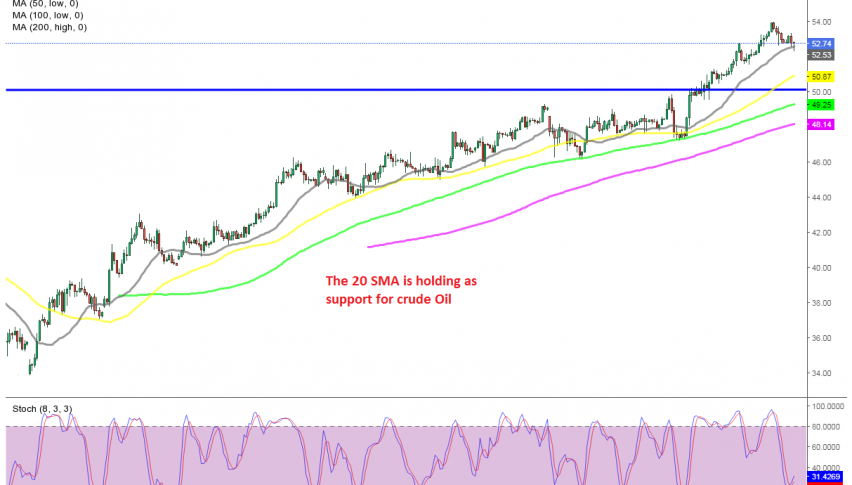 Anyone Buying the Pullback in Crude Oil at the 20 SMA?

Crude Oil has been bullish since April, following the big crash which sent US WTI Oil to $ -37.50, as Saudis flooded the market with cheap Oil, leaving no storage tanks/deposits for US Oil producers. But, the Oil industry didn’t fall apart and crude Oil has been on a bullish trend since then.

In August crude Oil formed a top at $ 43.50 and in the following two months we saw a retreat in Oil prices, which declined more than $ 10. But, the bullish trend resumed again in November after US presidential elections and in January Oil buyers pushed above the big round level at $ 50.

That level was supposed to offer some decent resistance, but it was broken without much hassle in the first week of January, which shows that buyers are in total control. During this time moving averages have been doing a great job as support, particularly the 50 SM (yellow) and the 100 SMA (green). Although the 20 SMA (grey) has also helped, when the trend picked up pace.

In the last two weeks, the bullish trend has accelerated after the last bounce off the 100 SMA and the higher moving averages haven’t been able to catch up. As a result, the 20 SMA is acting as support for US WTI crude Oil now, which caught up after Oil retraced more than 150 pips lower.

The 20 SMA was pierced for a brief moment, but the price moved above it and the current candlestick looks to be closing as a pin, which is a bullish reversing signal after the pullback down. The stochastic indicator is also oversold on this time-frame chart, so the retrace seems complete. We might go long on Oil if the actual H4 candlestick closes as it is, targeting 100-150 pips.