Anyone Buying the Dip in NZD/USD? - Forex News by FX Leaders 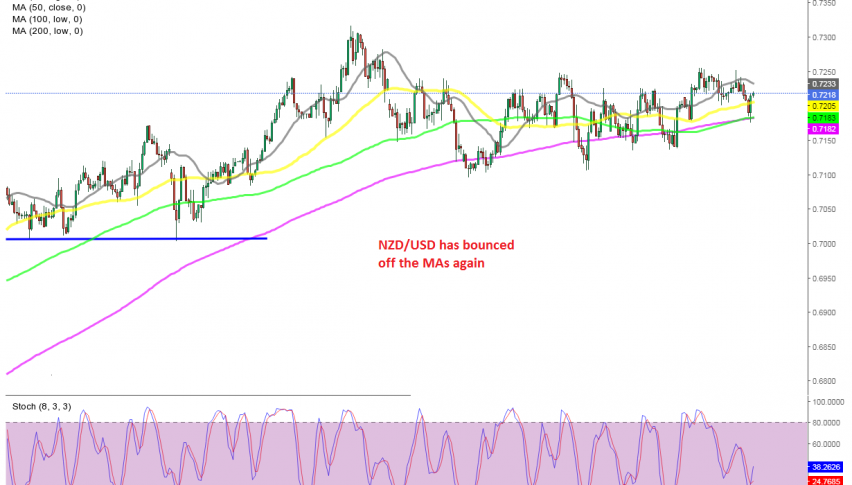 Anyone Buying the Dip in NZD/USD?

The pullback is over now on the H4 chart

During the uptrend, moving averages were doing a great job as support, holding the price during pullbacks lower and pushing the trend higher. In January we saw a pullback lower, as the USD attempted to turn bullish, but the decline ended and this month the trend has turned bullish again.

The pace is not as strong as it used to be during November and December, but buyers are buying every dip and pushing the price higher. The latest occasion took place just a while ago, with the price retracing lower in the last few trading sessions.

But it found solid support at the 100 SMA (green) and 200 SMA (purple) on the H4 chart. Now the price is bouncing back up and trades 30 pips higher from the lows, so that was a great chance to go long. But, we already opened a buy forex signal in AUD/USD which is very similar to NZD/USD.

Skerdian Meta // Lead Analyst
Skerdian Meta Lead Analyst. Skerdian is a professional Forex trader and a market analyst. He has been actively engaged in market analysis for the past 11 years. Before becoming our head analyst, Skerdian served as a trader and market analyst in Saxo Bank's local branch, Aksioner. Skerdian specialized in experimenting with developing models and hands-on trading. Skerdian has a masters degree in finance and investment.
Related Articles
Australia's Retail Sales Beat Expectations in March
In an encouraging sign of economic recovery, Australia's retail sales beat expectations, supported by a surge in consumer confidence and an
2 hours ago