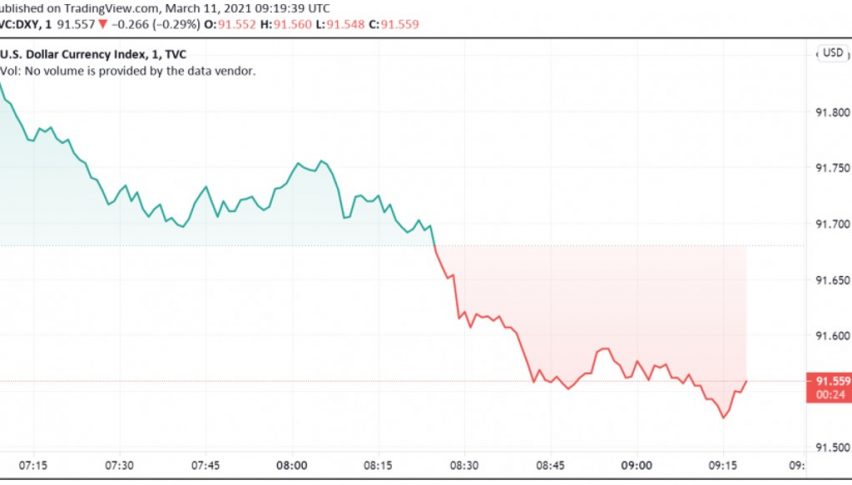 The US dollar is trading bearish against most of its major rivals early on Thursday following the release of a soft CPI report even as Treasury yields slide lower. At the time of writing, the US dollar index DXY is trading around 91.55.

Notwithstanding the current weakness, the outlook for the US dollar remains upbeat in the near term as markets are likely to focus on rapid economic recovery in the US after the rollout of the next round of stimulus measures. During the previous session, President Biden’s $1.9 trillion worth of COVID-19 relief package received a final approval from the House of Representatives, which could bolster the economy as it emerges from the pandemic-induced downturn.

Analysts forecast the reflation sentiment to continue having an impact in global markets, which is also likely to support the dollar in the coming sessions. Expectations of a spike in inflation as economies recover at a rapid pace on the back of vaccine rollout and more stimulus could send bond yields higher and strengthen the greenback.

Later today, the US dollar can see some volatility on the auction of 30-year US Treasuries – an important factor that could shed light on the demand for more debt. Wednesday’s auction of the 10-year Treasuries received considerable interest and offered some relief to markets about investors’ willingness to accept further debt as a result of increased stimulus initiatives.

Surprise US Stimulus Checks Going Out This Week
2 years ago