Services Remains in Recession in Europe, Despite the Improvement - Forex News by FX Leaders 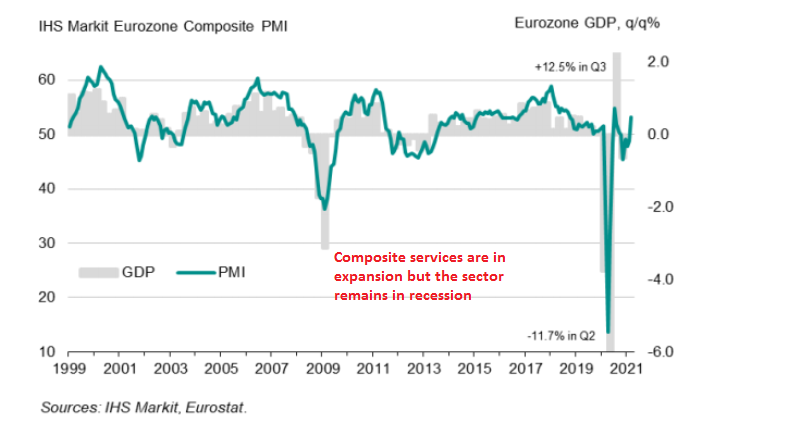 Services Remains in Recession in Europe, Despite the Improvement

Services will come back to life when lockdowns are over

The service sectors has been the most affected by the coronavirus and the restrictions that followed. This sector fell in recession worldwide in spring last year and was slow to come back to life, unlike manufacturing which bounced right back and has been surging in recent months. In the US, services are surging as well, with restrictions being much lighter, while in Europe services fell back in recession in autumn as restrictions remain tough and the European leaders are pushing for more lock-downs.

Some modest upside revisions to the final readings as also seen in the earlier French and German reports. The composite reading is the highest since last July as economic activity stabilised towards the end of Q1.
The manufacturing sector continues to take the lead with services activity seen improving slightly amid tighter restrictions. That may yet remain the case in Q2 as the virus situation continues to pose a threat for the time being. Markit notes that:

“Eurozone business activity bounced back in March, returning to growth after four months of decline with an even stronger expansion than signaled by the forecast-beating ‘flash’ data.

“Manufacturing is booming, led by surging production in Germany, and the hard-hit service sector has come close to stabilizing as optimism about the outlook improved further during the month. Firms’ expectations of growth are running at the highest for just over three years amid growing hopes that the vaccine roll-out will boost sales in the coming months.

“Strengthening demand has already led to the largest rise in backlogs of uncompleted work seen for almost three years, encouraging increasing numbers of firms to take on additional staff. Improving labour markets trends should help further lift consumer confidence and spending as we head into the second quarter.

“The survey therefore indicates that the economy has weathered recent lockdowns far better than many had expected, thanks to resurgent manufacturing growth and signs that social distancing and mobility restrictions are having far less of an impact on service sector businesses than seen this time last year. This resilience suggests not only that companies and their customers are looking ahead to better times, but have also increasingly adapted to life with the virus.”

Minor downward revisions as the final readings just reaffirm a modest rebound in overall activity in March as output and incoming new work saw strong increases last month.
Business expectations for the year ahead was the strongest since December 2006 in anticipation of the continued success in the vaccine rollout. Markit notes that:

“UK service providers were back in expansion mode in March as confidence in the roadmap for easing lockdown restrictions provided a strong uplift to new orders. Total business activity increased at the fastest rate since August 2020 and this return to growth ended a four-month sequence of decline.

“Forward bookings for consumer services and rising optimism about recovery prospects resulted in extra staff hiring across the service economy for the first time since the start of the pandemic. Business optimism improved for the fifth month running in March and was the highest since December 2006.

“Around two-thirds of the survey panel forecast an increase in output during the year ahead, which reflected signs of pent up demand and a boost to growth projections from the successful UK vaccine rollout. Of the small minority citing downbeat expectations in March, this was often linked to uncertainty about international travel restrictions.

“There were further signs that strong cost pressures have spilled over from manufacturers to the service economy, especially for imported items. Higher prices paid for raw materials, alongside rising transport costs and utility bills, meant that operating expenses across the service sector increased at the strongest rate since June 2018.” 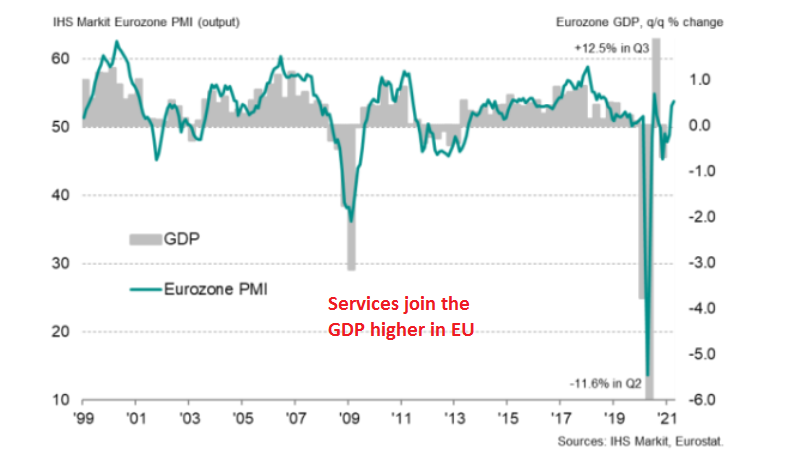 EUR/USD Bounce Off 1.20, As Eurozone Service Sector Comes Out of Recession
7 mins ago