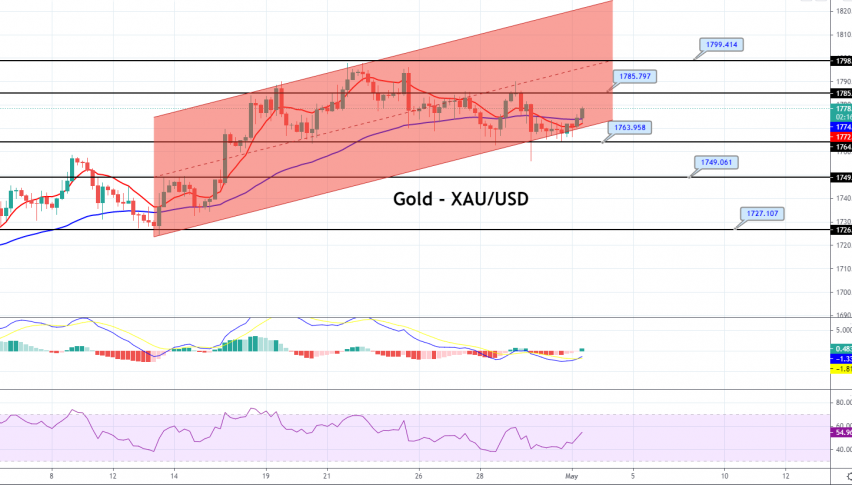 During Monday’s early Asian trading session, the precious metal gold failed to stop its previous day’s negative performance. It remained depressed around the $1,770 level due to the upbeat market sentiment, triggered by the optimism over a recovery in global economics. Meanwhile, the recent positive earnings from the key U.S. companies put some additional positive impact on the market trading sentiment, which tends to undermine the safe haven metal prices. Hence, the positive risk sentiment was seen as one of the key factors that weighed on the yellow metal.

Across the ocean, the prevalent bullish bias surrounding the U.S. dollar has also played its crucial role in weakening the bullion prices as the price of GOLD is inversely related to the price of the U.S. dollar. Moreover, the losses in the gold prices were further bolstered by the continuous progress over U.S. President Joe Biden’s stimulus packages. Conversely, the ever-increasing COVID-19 cases in some countries such as India, Japan, and Brazil keep raising doubts over the global economic recovery from the pandemic, which in turn helps the safe haven metal to limit its deeper losses, at least for now. Meanwhile, the slowing pace of growth in the Chinese manufacturing sector also weighs on the market sentiment, which was also seen as one of the key factors that capped any meaningful upside for gold. As of writing, the yellow metal price is trading at 1,768.95 and consolidating in the range between 1,766.19 and 1,769.17.

Despite the surging COVID-19 cases in some Asian countries, the market trading sentiment has been representing positive performance on the day as the bullish appearance of Asia-Pacific stocks and gains in the S&P 500 Futures tend to highlight the risk-on mood. However, the reason could be associated with the optimism over the recovery in global economics and recently positive earnings from the key U.S. companies. In addition, the continuous progress of U.S. President Joe Biden’s stimulus packages also boosts the market trading mood, which was seen as one of the key factors that undermining the safe-haven gold prices. Furthermore, the gains in the S&P 500 Futures were rather unaffected by the mounting doubts over the recovery in the US-Iran relations. As per the latest report, U.S. administrators said that the deal to revive a nuclear agreement with Iran and ease sanctions is not imminent and separately rejected an Iranian report on an impending prisoner swap.Despite the risk-on mood, the broad-based U.S. dollar managed to extend its previous positive performance. It remained well bid on the day as investors still cheering the faster vaccinations in the U.S. and the recent positive data from the U.S., which tend to underpin the American currency. Moreover, the upticks in the U.S. dollar could also be tied to the geopolitical headlines concerning North Korea, China, and Iran, which increased the safe-haven demand in the market and helped the safe haven U.S. dollar to stay bid.

In contrast, the ever-increasing coronavirus cases in India, Japan, and Russia keep questioning the market risk-on mood, which was seen as one of the key factors that helped gold prices to limit their deeper losses. Apart from this, the geopolitical headlines concerning North Korea, China, and Iran offered some additional help to the safe-haven prices. Furthermore, the losses were further capped by the reports suggesting that one jab of the COVID-19 vaccine isn’t enough to control the virus spread even for the short term.

In the absence of Chinese and Japanese traders, market traders will keep their eyes on the ISM Manufacturing PMI and the Fed Chair Powell’s speech, which may provide a fresh direction. Meanwhile, the trade/political headlines will also be closely observed. In addition to this, the U.S. dollar price movement will continue to play a key role in the gold’s direction. 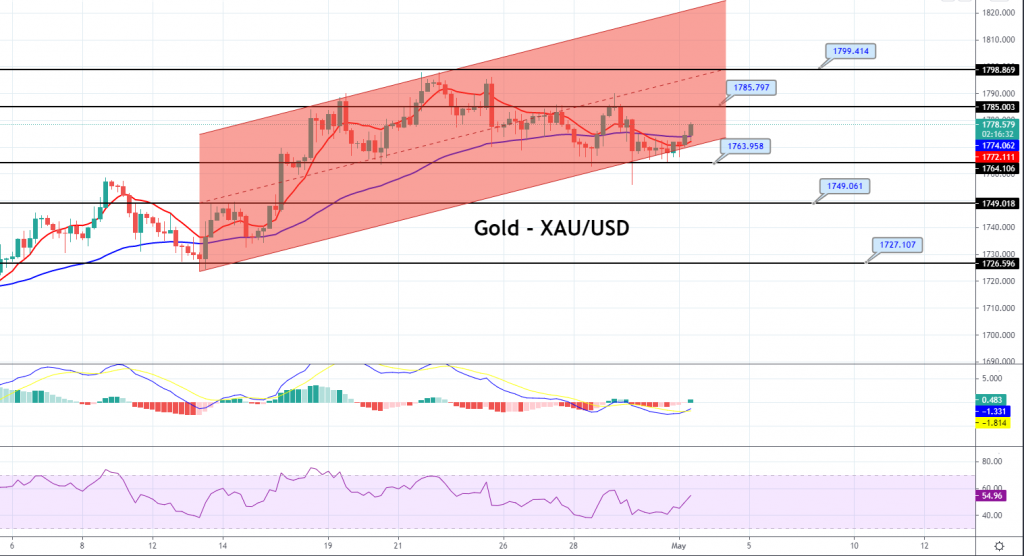 S1 1750.75
S2 1759.84
S3 1764.5
Pivot Point 1768.93
R1 1773.59
R2 1778.02
R3 1787.11
The precious metal gold is trading with a strong bearish bias at 1,777 level. On the 4-hour timeframe, the pair has violated an upward channel that was supporting the precious metal at 1,780 level. For now, it may encounter resistance at the same support become resistance level. On the lower side, GOLD can gain immediate support at 1,767, and violation of this level can extend further selling trends until 1,749. Since the MACD and RSI were also supporting a bearish trend, we decided to open a buy signal around 1,776. The idea is to target the 1784.89 level with a stop loss of around 1788.89. Good luck!
BUY XAU/USD
Check out our free forex signals
Follow the top economic events on FX Leaders economic calendar
Trade better, discover more Forex Trading Strategies