LTC/USD closed at $387.806 after placing a high of $387.806 and a low of $344.818. Litecoin reached an all-time high on Sunday after Cloudbet announced that it had introduced Dogecoin and Litecoin on its site after the two coins drew the most votes in a recent survey of almost 10,000 customers about which new currencies to add.

Cloudbet spokesperson Camilla Wright said that the people have spoken, and Cloudbet will only add currencies that their customers hold and use. She added that it had been the central part of their integration philosophy since they have opened for business. She also declared that more new coins were coming soon.

Litecoin has moved up about 150% this year. The coin based on the bitcoin protocol was designed to lowr confirmation times and fees than the leading cryptocurrency. The inclusion of Dogecoin and Litecoin on Cloudbet will increase the number of cryptocurrencies supported by the operator to 12. A dozen coins collectively account for more than 80% of the total market capitalization of all cryptocurrencies.

Cloudbet started its operations in 2013, the same year as Dogecoin. Cloudbet embraced blockchain technology to give players privacy and financial freedom like never before. Since its origin, the company has taken millions of bets, earning a reputation as the most trusted and secure name in the crypto-gaming space.

The news that Cloudbet has added Dogecoin and Litecoin on its platform raised the popularity of Litecoin and supported the prices of LTC/USD on Friday. Furthermore, the weakness in the U.S. dollar also supported the rising prices. The U.S. Dollar Index that measures the greenback’s value against the basket of six major currencies fell to $90.19 level and gave strength to LTC/USD. 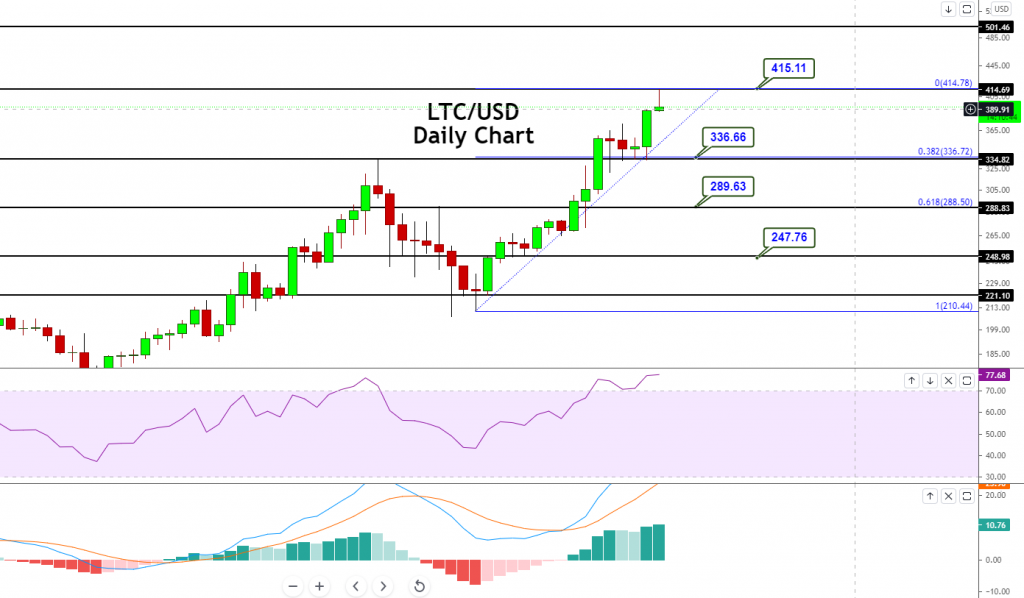 The LTC/USD pair has violated a wide trading range of 415 – 336 level on the technical front. A bullish breakout of 415 level can extend buying trend until 501 level. Whereas the breakout of 336 levels on the lower side can trigger sell trade until 289 levels. On the daily timeframe, LTC/USD has closed a bullish engulfing candle that suggests strong buying sentiment in Litecoin. The RSI and MACD are holding in a buy zone; thus, we should consider taking a buy trade over 373 level today. Good luck!

Is Litecoin Preparing to Break Out after This Week’s Continued Decline?
12 hours ago