LTC/USD closed at $359.106 after placing a high of $412.802 and a low of $335.177. Litecoin reversed its course and lost most of its previous day’s gains after hitting a new all-time high. It reached above $400 on Monday, this notable gain placed LTC in the top 10 cryptocurrencies by market capitalization and lifted its percentage in the crypto market to over 1% for the first time since early 2021.

The recent decline in Litecoin could be attributed to the profit-taking or a general break in the cryptocurrency market. After placing a new ATH, Litecoin saw a sudden decline in its prices on Monday. A study conducted by Chares Schwab has shown that more than 51% of millennials and Generation Z investors would more likely invest in cryptocurrencies than in traditional stocks. The rising interest in the digital assets sector due to fears of high inflation and dollar devaluation has pushed cryptocurrencies like LTC/USD to ATH levels, especially as the central banks around the world have responded to the coronavirus pandemic with easing of monetary policies.

The opportunity costs of holding traditional safe-havens like bonds and dollars among regional investors have reduced as the U.S. Federal Reserve has clarified that it will continue its $120 billion monthly asset purchase program and will maintain its benchmark interest rates near zero until 2023. The declining demand for the U.S. dollar has also played an important role in driving the LTC/USD price higher towards the $400 level. 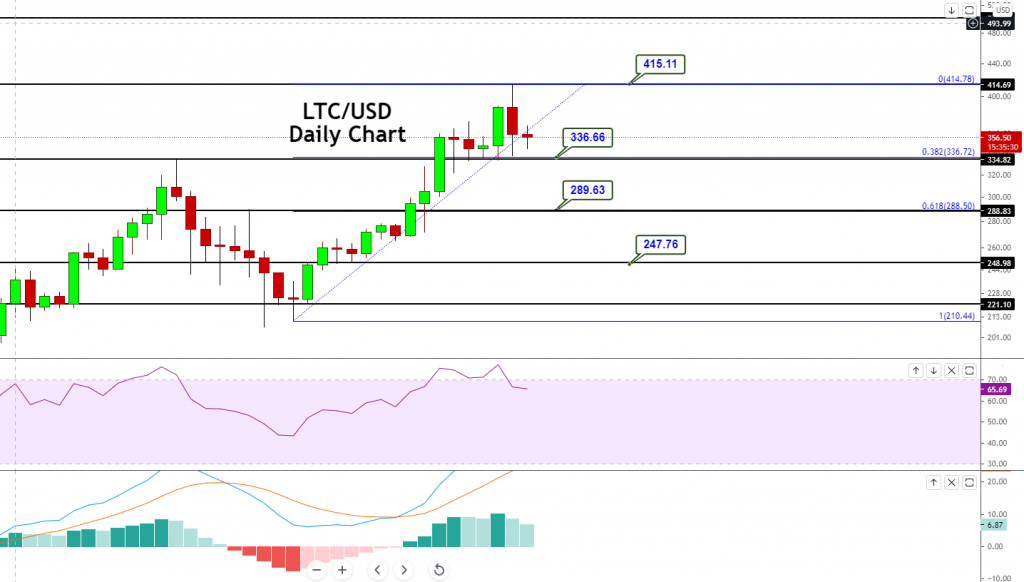 Support Resistance
325.254 402.879
291.403 446.653
247.629 480.505
Pivot point: 369.028
The LTC/USD pair has violated a wide trading range of 415 – 336 level on the technical front. A bullish breakout of 415 level can extend buying trend until 501 level. Whereas the breakout of 336 levels on the lower side can trigger sell trade until 289 levels. On the daily timeframe, LTC/USD has closed a bullish engulfing candle that suggests strong buying sentiment in Litecoin. The RSI and MACD are holding in a buy zone; thus, we should consider taking a buy trade over 373 level today. Good luck!
BUY LTC/USD
Check out our free forex signals
Follow the top economic events on FX Leaders economic calendar
Trade better, discover more Forex Trading Strategies
Related Articles

Is Litecoin Preparing to Break Out after This Week’s Continued Decline?
12 hours ago