After falling consecutively for four sessions, WTI crude oil prices retreated on Tuesday and recovered almost all of its previous day’s losses amid weakness in the U.S. dollar and after OPEC downplayed India’s coronavirus situation. Crude oil edged higher on Tuesday after OPEC said that it hoped for recovery in demand if India comes out of its coronavirus situation by then. The sign of easing in the coronavirus crisis in India was supporting oil prices on Tuesday. The seven-day average of new daily cases was at a record high, and global health authorities were already warning that the country’s variant was an international concern. Pressure on Indian PM Narendra Modi is increasing to implement a national lockdown to contain the virus surge.

Despite all these negative developments in the third-largest oil-importing country, the Organization of Petroleum Exporting Countries stuck to the forecast of a solid recovery in global oil demand in the second half of 2021 as growth in China and the United States will counter the coronavirus crisis in India. OPEC stated in its monthly report that demand for crude oil will rise by 5.95 million barrels per day this year or 6.6% as it has forecast in the previous month. However, the report also warned against significant uncertainties mainly around the pandemic. This prediction from OPEC supported oil prices on Tuesday and pushed them towards $65 per barrel.

Meanwhile, the concerns over the U.S. pipeline outage eased after the Colonial Pipeline said that it was working on restarting its network. The pipeline transports more than 2.5 million barrels per day of gasoline, diesel, and jet fuel. This news added strength to the crude oil prices as the company said it will eventually come to normalcy, although a degree of uncertainty still exists. Despite major pipeline outages, crude oil prices edged higher on Tuesday as the U.S. dollar was weak across the board. The U.S. dollar remained under pressure ahead of the release of the U.S. Consumer Price Index report scheduled to release on Wednesday. The U.S. Dollar Index measures the value of the greenback against the basket of six major currencies fell to $89.98 and supported the rising prices of crude oil as they both have a negative correlation.

On the data front, at 15:00 GMT, the NFIB Small Business Index came in line with the anticipations of 99.8. At 19:00 GMT, the JOLTS Job Openings improved to 8.12M against the projected 7.50M and supported the U.S. dollar that further capped gains in crude oil prices. The oil traders will be looking out for the release of crude and petroleum stockpiles in the United States that are expected to release on Wednesday. The American Petroleum Institute (API) report is released before the report of U.S stockpiles of crude oil from the U.S. Energy Information Administration (EIA). 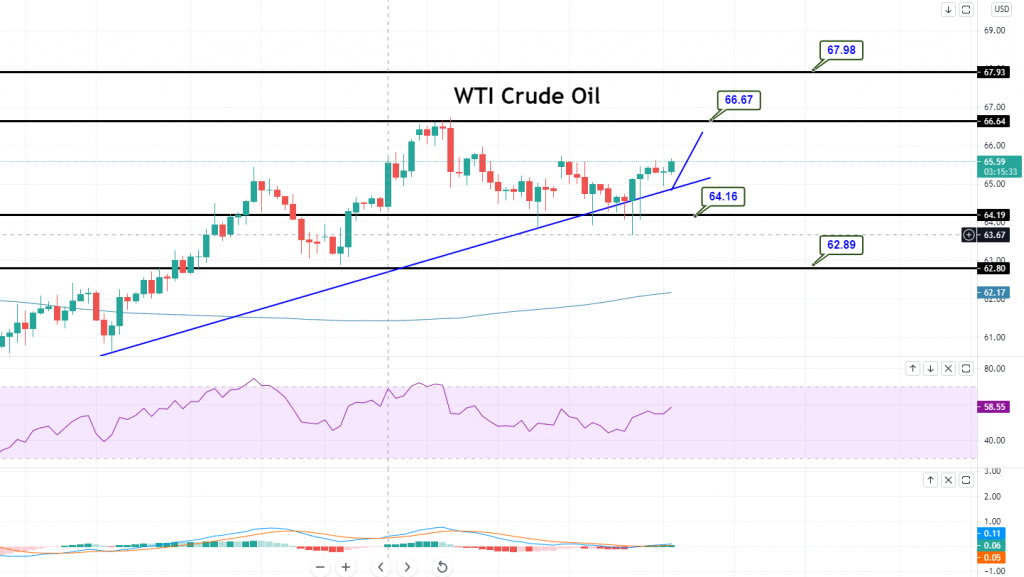 Support Resistance
63.99 65.79
63.07 66.67
62.19 67.59
Pivot Point: 64.87
WTI Crude oil is trading with a slightly bullish bias, bouncing off the support area of 64. Overall, U.S. Oil is still holding a tight trading range of 66.55 – 63.08. The technical indicators support a strong bullish bias, as the MACD and RSI are tossing over mid-levels. It indicates a bullish trend among traders. On the flip side, a bullish breakout above the 66.55 level can drive bullish bias until 67. The breakout of the support at the 64.16 mark can trigger a bearish trend until 62.89 and 62. Let’s keep an eye on 64.16 level today, as selling can be seen below this and buying above the same level. Good luck!
BUY USOIL
Check out our free forex signals
Follow the top economic events on FX Leaders economic calendar
Trade better, discover more Forex Trading Strategies
Related Articles
Weekly Outlook, Jun 21 - 25, 2021: Top Economic Events to Watch This Week
The broad-based U.S. dollar is going to end this week on the bullish track and hovering near 2-month highs after U.S.
5 hours ago