GBP/USD succeeded to maintain its overnight bid tone through the first half of the Asian session and hit the intra-day highs around the 1.4190 level after the U.K. jobless rate unexpectedly fell to 4.8% in March, which instantly raised hopes over the U.K. economic recovery and contributed to the currency pair’s gains. Meanwhile, the reason for bullish bias could also be tied to the broad U.S. dollar weakness.

The sluggish U.S. data helps Federal Reserve keep easy money policies, which weighs on the U.S. dollar and extends some support to GBP/USD. Elsewhere, the upticks in the pair were further supported by the reports suggesting that the U.K. reopened businesses and further eased a four-month COVID-19 lockdown.

Despite the long-lasting US-China battle and the intensifying Israel-Palestine tension, not to forget worsening virus conditions, the market trading sentiment is still representing positive performance and remained well-supported by the renewed optimism over the highly infectious coronavirus disease’s vaccines. The optimism improved after the U.S. showed a willingness to provide more of its vaccines with the needy nations. As per the keywords, “President Joe Biden will send minimum 20 million more COVID-19 vaccine doses abroad by the end of June”. Apart from the U.S., the Dragon Nation offers support to the global push for Covid vaccine patent waiver. In addition to this, the buying interest around the equity market picked up further pace following the U.S. President Joe Biden raised his voice against Israel-Palestine violence. Meanwhile, the upbeat market mood could also be tied to the report suggesting that the United Kingdom reopened businesses and further lifted a four-month COVID-19 lockdown, which in turn improves the market sentiment. At the same time, France and Spain have also followed this step. However, the prevalent buying bias surrounding the market sentiment was seen as one of the key factors that kept the U.S. dollar lower and contributed to the GBP/USD currency pair gains.

At the USD front, the broad-based U.S. dollar failed to stop its early-day bearish performance and remained sour on the day as investors increased their bets that the U.S. Federal Reserve would not hike interest rates anytime soon. Meanwhile, the prevalent market upbeat mood, backed by the optimism surrounding the coronavirus (COVID-19) vaccine, also played its major role in undermining the safe-haven U.S. dollar. Therefore, the losses in the U.S. dollar were seen as one of the key factors that helped the GBP/USD currency pair to stay bid.

On the data front, the U.K.’s official jobless rate dropped further to 4.8% in March vs. the previous 4.9% and 4.9% expected, while the claimant count change showed a surprise drop last month, as per the Office for National Statistics (ONS). The number of people claiming unemployment benefits showed a drop of 15.1K in April versus +25.6K expected and +10.1K seen previously. The jobless count rate came in at 7.2% vs. 7.2% last. In the meantime, the U.K.’s average weekly earnings, excluding bonuses, came in at +4.6% 3Mo/YoY in March against +4.4% last and +4.6% expected while the gauge including bonuses arrived at +4.0% 3Mo/YoY in March against +4.5% previous and +4.6% expected. Moving on, the market traders will keep their eyes on Wednesday’s Federal Open Market Committee (FOMC) minutes. Apart from this, the trade/political headlines will entertain markets. 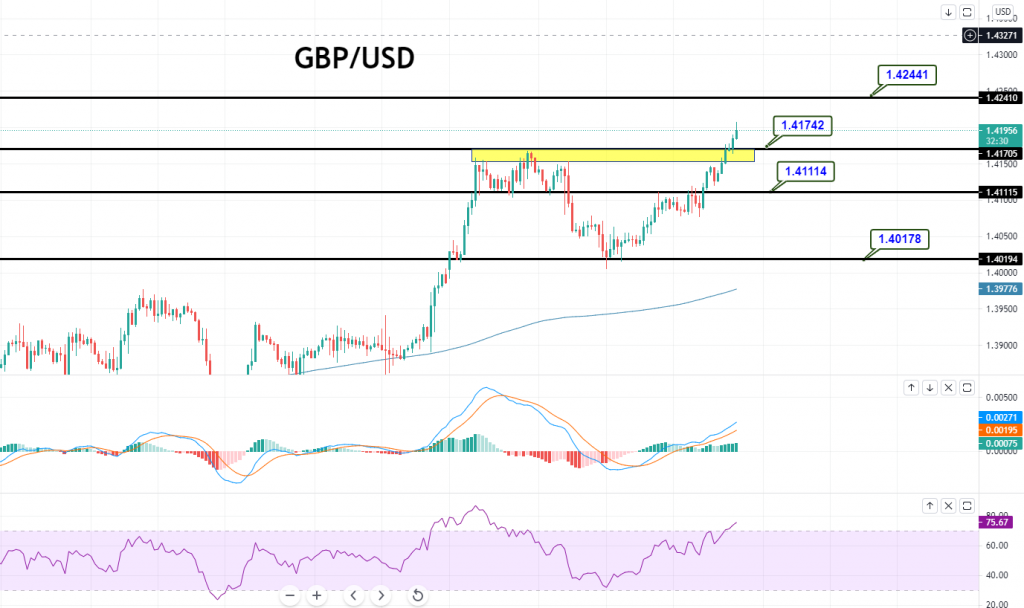 Technically, the GBP/USD pair is trading with a bullish bias at 1.4194 level. Lately, the pair has violated the double top resistance level of 1.4174, leading the Cable pair towards the next resistance area of 1.4144 level. The leading indicators such as MACD and RSI support the bullish trend in Sterling; therefore, we have opened a buy position to target the 1.4244 level today. Good luck!

Sideways Trading in Gold Continues - Brace for a Breakout!
14 hours ago