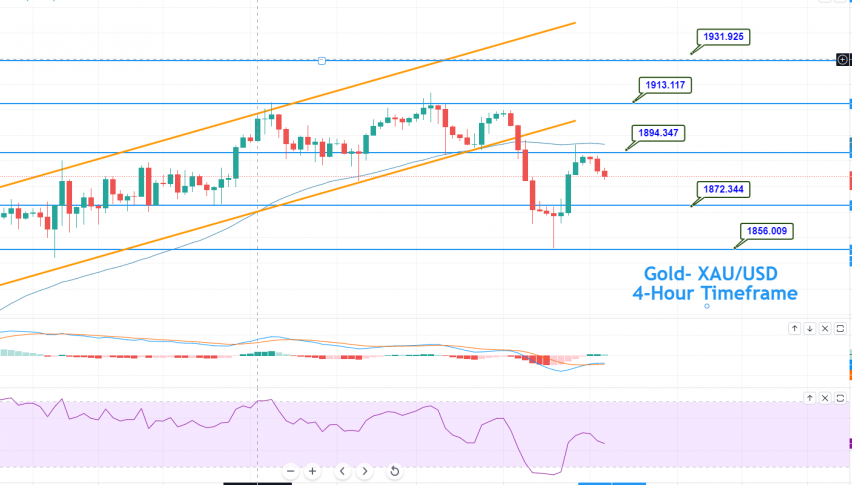 During Monday’s Asian trading hours, the price of the precious metal failed to extend the gaining streak we saw on Friday. It dropped below the $1,900 level, as the prevalent risk-off mood put a safe-haven bid under the US dollar, which was seen as one of the key factors that kept the gold price under pressure, due to its inverse relationship with the dollar. The upticks in the US dollar could be short-lived, as the market uncertainty over the Fed’s next move could continue to exert downside pressure on the greenback, which may help to limit deeper losses in the GOLD price. Meanwhile, the ongoing selling bias in the GOLD prices was further bolstered after the Labor Department report indicated that job growth had picked up in May. This had a positive impact on the market trading sentiment and contributed to the declines in GOLD.

On a different page, the recent hike in coronavirus (COVID-19) cases in Victoria keeps weighing on the market trading mood, which may help to limit losses for the safe-haven metal. Another factor that capped the declines in the gold prices was the reaction to US Secretary of State Antony Blinken’s recent comments, in which he held China responsible for the origins of the COVID-19 virus. Meanwhile, the latest chatter over the UK’s support to Australia in its trade complaint against China put some additional downside pressure on the market trading sentiment, which was seen as one of the key factors that kept a lid on any additional losses in the GOLD prices. At the time of writing, the yellow metal prices were trading at 1,886.01, and consolidating in the range between 1,884.68 and 1,891.86.

On the USD front, the broad-based US dollar succeeded in stopping its declining streak of earlier in the day, taking some fresh bids as the market risk-off mood tends to underpin the safe-haven assets, including the US dollar. In addition to this, another reason for the bullish US dollar could also be associated with the previously released upbeat critical US economic data, which showed continued progress in terms of the US labor market. Conversely, the gains in the US dollar could be short-lived, as the market uncertainty over the Fed’s next move tends to confuse market players. Therefore, the prevalent upticks in the US dollar have become a key factor that has kept the price of the precious metal lower, due to its inverse relationship with the US dollar.

Traders will keep their eyes on the consumer price index (CPI) figures, which are due later in the week. The data could influence the Fed’s next move, as it provides a further measure of current price pressures. A lower-than-expected figure will push the US currency down. Traders are also awaiting the European Central Bank’s (ECB) latest policy decision, which is due to be released on Thursday. 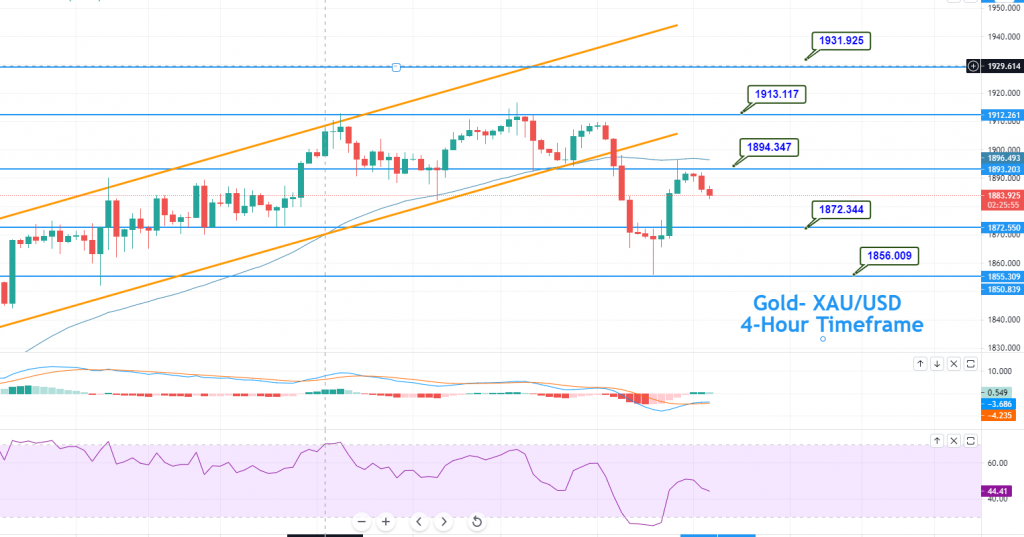 S3 1,865.28
S2 1,880.74
S1 1,888.61
Pivot Point 1,896.2
R1 1,904.07
R2 1,911.66
R3 1,927.12Technically, the precious metal, gold, is trading at the 1,886 level, and it is facing strong resistance at the 1,894 level. Closing of gold prices below 1,894 supports a strong selling bias on the lower side, where immediate support for gold remains at the 1,872 level. The recent downward inside bar in the pattern, and the bearish engulfing pattern, both support a selling bias in gold. The RSI and MACD support a selling bias in gold. Thus we should consider taking a sell trade below the 1,892 level today. Good luck!
Check out our free forex signals
Follow the top economic events on FX Leaders economic calendar
Trade better, discover more Forex Trading Strategies
Related Articles