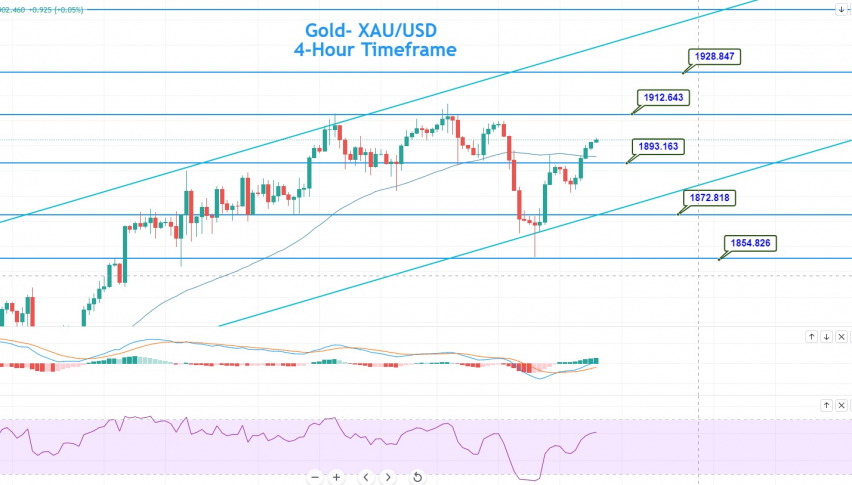 During Tuesday’s early Asian trading hours, the price of the yellow metal, gold, failed to maintain its bullish rally of the previous day. It edged lower, under the $1,900 level, possibly due to the continuous vaccination progress and the confidence among western policymakers’ regarding the reopening of economic activities, which positively impacted the market trading sentiment and undermined the safe-haven assets, including gold. On a different page, the bearish bias of the broad-based US dollar, which was triggered by a combination of factors, helped limit deeper losses, as the price of gold is inversely related to the price of the US dollar. Furthermore, the declines were also capped by the prevalent risk-off market mood, which tends to underpin the safe-haven gold prices.

However, the prevalent downbeat mood was under pressure from the cautious sentiment before the key sentiment on Thursday and trade/political tussles concerning China. This was seen as one of the key factors that kept a lid on any additional losses in the gold prices. At the time of writing, the yellow metal prices were trading at 1,898.64, and consolidating in the range between 1,898.40 and 1,899.62.

Despite the optimism over the coronavirus (COVID-19) vaccination programs and the western policymakers’ confidence regarding the reopening of economic activities, the global equity market failed to stop its  bearish performance of the previous day. It remained depressed, as the doubts over the UK plan to reopen the economy, couple with renewed fears of COVID-19  in Australia, kept weighing on the market trading sentiment. Another reason for the sour trading mood could also be tied to the cautious sentiment ahead of the Fed’s next move. Meanwhile, the worsening relationship between Britain and the European Union, and Friday’s downbeat US jobs report, have put additional pressure on the risk sentiment. UK Cabinet Ministers Chris Witty and Sir Patrick Vallance, are considering a 15-day delay in the UK’s roadmap to easing the lockdowns, which keeps raising doubts over economic recovery in the UK. This has turned out to be one of the key factors that has kept the market trading sentiment under pressure. As a result, the selling bias surrounding the market trading sentiment was seen as one of the key factors that is helping to limit deeper losses in the bullion prices.

Despite the risk-off market mood, the broad-based US dollar failed to put a stop to its bearish bias, remaining depressed on the day, as the previously released US jobs data put pressure on the greenback, because investors speculated that the jobs growth was not strong enough to raise expectations that the US Federal Reserve would tighten its monetary policy. Meanwhile, the previously release, less positive non-farm payroll data also played a major role in undermining the US dollar. The losses in the USD were seen as another key factor that helped to ease the bearish bias in the gold prices. The US dollar index, which pits the greenback against the euro and five other major currencies, hit an intraday low of 89.880, which is under the critical level of 90.

On a different page, the ever-increasing concerns over the resurgence of the coronavirus pandemic and the ongoing US-China tussle keep attacking the market trading mood. It is worth recalling that the US Secretary of State promised to hold China accountable for the origins of COVID-19. Meanwhile, the news of the US-Taiwan trade talks could also tease Beijing and escalate the tussle among the world’s two top economies. Furthermore, UK Trade Secretary Liz Truss supports Australia in its trade complaint against China. This, in turn, put pressure on the market trading sentiment, and it has become a key factor that has kept a lid on any additional losses in the safe-haven metal prices.

There is not any critical economic data due for release today. Hence, the Goods Trade Balance and the NFIB Business Optimism Index from the US, which are expected to be released later in the day, will be looked upon for fresh direction. Apart from this, the trade/political headlines will also be closely observed. 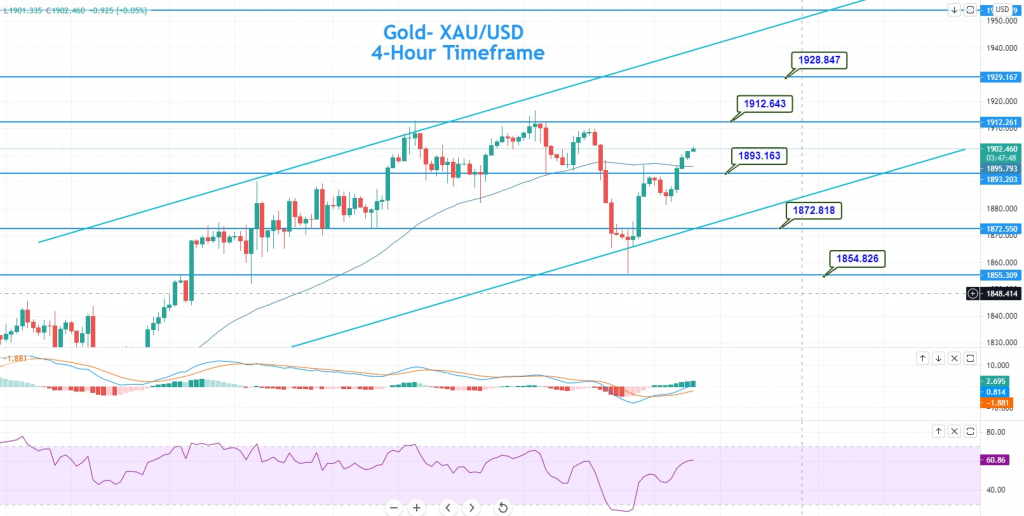 The precious metal is trading at the 1,900 level, and facing strong resistance at the 1,912 level. Closing of gold prices above the 1,894 level supports a robust bullish bias. On the lower side, a bearish breakout at 1,893 could lead the gold prices towards levels of  1,882 and 1,871 today. On the 4-hour time-frame, gold has closed three white soldiers, suggesting odds of a continuation of the bullish trend. It may find resistance at the 1,912 level on the higher side, and a bullish breakout at this level would open up additional room for buying until the 1,928 level today. Considering a dip in the BITCOIN price today, investor interest is once again shifting towards gold, thus adding further support to its prices. Good luck!

Thanks for sharing info