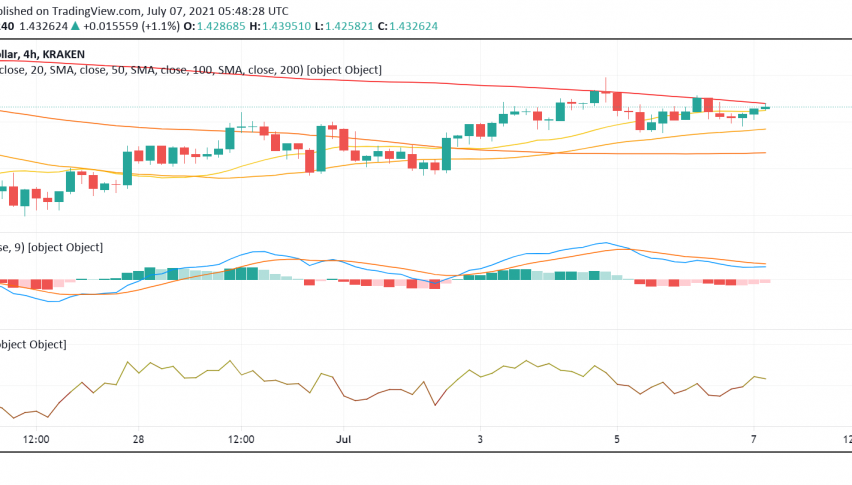 It’s a bullish start to Wednesday for Ethereum killer Cardano (ADA) with its prices steadily climbing higher over the past few hours as it bounces back from the recent dip below the key $1.40 level. At the time of writing, ADA/USD is trading around $1.43.

During the previous session, the Cardano Foundation unveiled its five-year strategy, in which it expects the blockchain network to see adoption rates soaring and even expanding into the area of legislation. In addition, the Foundation aims to bring 50 banks onboard by 2022 to use ADA to increase their customer base.

Even as work on the Alonzo upgrade progresses, bringing the network closer to supporting smart contracts, IOHK – the firm behind the development of Cardano, has announced a collaboration with Nexo Exchange. The integration of the blockchain into the digital lending platform will allow ADA holders to buy, borrow, sell and lend crypto assets against their tokens, increasing the utility of the native token.

Cardano’s bullish moves could also find some support from the news about Alabama Congressman Barry Moore making purchases of ADA among other cryptocurrencies over the past several months. In his trading disclosures, Moore confirmed that he had bought ADA tokens on May 10, 11 and 13, indicating growing interest in cryptocurrencies among lawmakers.

On the H4 chart of ADA/USD, most of the moving averages are exhibiting a bullish bias. Although, leading technical indicators MACD and momentum are signaling a bearish mood as well.

Cardano’s price is holding above the pivot point at $1.41 and further buying can take it up to $1.54 where there could be some resistance. A break past this level opens the door to climb above the key $1.60 level, shortly after which traders could face some more resistance at the $1.62 level.