Although leading cryptocurrencies had some price volatility in 2021, many of the most popular crypto coins have recently experienced considerable bullish momentum. Cardano is currently the main topic of conversation, with its ADA coin emerging as one of the best-performing crypto assets, thanks to a market surge, as well as anticipated listings on other exchanges and big feature rollouts.

What is ADA Token?

ADA is a digital token or cryptocurrency that runs on the Cardano blockchain. However, ADA can be used to pay for premium network services. Users on the network can also transfer and trade their cash through several cryptocurrency exchanges, such as Binance, Digifinex, and Upbit, to mention a few. Cardano’s crypto wallet, Daedalus, is secure to save these coins.

Cardano is a decentralized blockchain platform led by Charles Hoskinson, co-founder of Ethereum. The platform’s development began in 2015 and was released in 2017. Its claimed purpose is to make the blockchain network more environmentally friendly and scalable by lowering the need for energy-intensive bitcoin miners.

Cardano is to ADA what Ethereum and Ripple are to ETH and XRP, respectively. In layman’s terms, Cardano is the platform that runs the native cryptocurrency ADA. Cardano is a decentralized blockchain platform divided into two parts: the Cardano Settlement Layer (CSL) and the Cardano Computational Layer (CCL) (CCL).

Charles Hoskinson revealed the Alonzo hard fork in August 2021, prompting Cardano’s price to skyrocket, increasing 116 percent in the next month. The Cardano ‘Alonzo’ hard fork went live on September 12, 2021, bringing smart contract features to the blockchain. In the first 24 hours after the launch, over 100 smart contracts were implemented.

Agricultural organizations use Cardano to track fresh fruit from farm to fork, while other solutions created on the platform enable tamper-proof storage of educational credentials and shops to combat counterfeit items.

Cardano made its debut in September 2017, with its native token, ADA, trading at roughly $0.02. The first significant price movement occurred at the end of November 2017, when ADA’s market capitalization topped $1 billion for the first time – and after a series of rapid upsurges, the price had increased almost 4,000 percent to $1.21 on January 4, 2018. ADA had a market capitalization of about $31 billion at the time.

Later, YFI began to rise again, breaking previous price records on its way to a New All-Time High of $43,873.82 by mid-September, before plummeting to $22,595.61 by the end of the month. As a result of the massive supply pressure,

The following year, 2019, didn’t deliver much in price volatility. Between March and June, there were a few minor rises, but each time the price of ADA failed to break past hard resistance at $0.10, and by the end of the year, Cardano was back to $0.03.

Cardano made consistent gains toward $0.07 in January and February 2020 but suddenly lost them in March when the price of ADA plunged 45 percent in a single day, bottoming out at roughly $0.02. However, this signaled the beginning of a period of growth, and by August 2020, Cardano had risen to $0.14. Following a brief dip at the beginning of September, the gains continued, and ADA finished the year well, ending above $0.17.

Recent Changes in the ADA Price

Cardano’s trading history has been influenced by several events, including changes to its mainnet and broader economic trends. Its present value is determined by the market’s supply and demand balance, which is constantly changing.

ADA was influenced by some of the broader market developments in 2020. In March, the stock market crashed dramatically when economies and borders worldwide shut down in reaction to the COVID-19 epidemic. The rest of the crypto economy and the global stock market felt the impact, with the most significant single-day drop since 1987.

The decline at the beginning of September was seen across the crypto market, as was the period of increase at the end of the year and into 2021 following Bitcoin’s last bull run. The release of the Shelley mainnet in mid-2020, which included staking rewards and moved the network closer to decentralization, may have aided Cardano’s growth. Furthermore, ADA’s ascent to new highs could be fueled by growing excitement for the Goguen mainnet, Cardano’s third stage of development, which will offer a slew of new capabilities, including the capacity to create decentralized apps, when it launches in 2021. (dApps).

Furthermore, the price of Cardano (ADA) can be influenced by a variety of variables, including project updates, sentiment, and market movements. For example, like Bitcoin, Cardano has a total fixed supply, which means it is not subject to inflation or depreciation like fiat currencies are.

Many holders may desire to move their ADA off exchanges and into stake pools since the outstanding ADA not yet in circulation will be issued as staking returns. However, as long as demand is sustained or raised, this would limit ADA supply on the market, increasing its price. Therefore, demand for ADA is fueled by its utility for facilitating transactions on the Cardano network and participating in its governance, in addition to staking benefits.

The price of Cardano is projected to rise in tandem with its acceptance and use cases since the system becomes more valuable as more developers build on it. However, because the Goguen update adds smart contract functionality to the blockchain, it may spur new development, resulting in a significant increase in ADA price.

Cardano (ADA/USD) Price Prediction for the Next 5 Years

Let’s take a look at the Cardano price forecast for 2022 to 2025. All of your doubts will be dispelled at the conclusion, and you will know if the Ada Price will rise or decline. 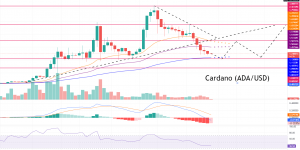 According to the projection price and technical analysis, the price of Cardano is expected to reach a minimum of $5.18 in 2023. With an average trading price of $5.36, the ADA price can reach a maximum of $6.03. 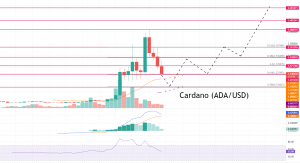