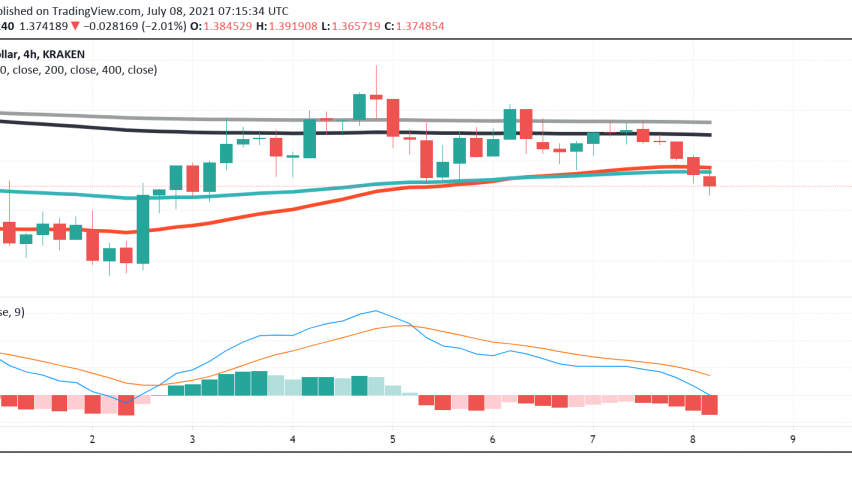 Cardano (ADA) is starting Thursday on a bearish footing, following crypto leaders Bitcoin and Ethereum on their downslide, a day after the FOMC minutes shed more light on the Fed’s hawkish shift. At the time of writing, ADA/USD is trading around $1.37.

It slid below the key $1.40 level in the previous session over rising expectations that the Fed could begin tapering stimulus efforts sooner than previously planned. This sent more investors towards the US dollar, sending riskier instruments like cryptocurrencies lower as a result.

On the fundamentals side, meanwhile, there are several reasons to feel upbeat about Cardano’s future prospects, especially with the upcoming Alonzo upgrade which will give the blockchain network smart contract capabilities. This important feature can give the network the power to take on crypto major Ethereum in the DeFi game, as it offers lower transaction costs and higher levels of scalability and efficiency in a far more energy efficient manner.

Cardano’s ADA is likely to enjoy some support from recent observations shared by crypto analyst Nicholas Merten, who sounds extremely optimistic about its future prospects, expecting the price to surge as high as $3 and possibly even the $5 mark. ADA could soar to new ATHs once the development team finishes the Goguen stage of Cardano’s roadmap, which could happen as soon as the end of this summer.

Another key factor that plays in its favor is a recent report that reveals how Cardano (ADA) has shot past Bitcoin (BTC) to become the most-held digital asset on leading social trading platform eToro during Q2 2021. On a quarterly basis, ADA holdings have soared by 51% since the first three months of the year, a strong sign indicating increasing interest among investors in the Ethereum killer.

Even as its future looks promising, the H4 chart of ADA/USD reveals a bearish bias among the moving averages and leading technical indicators MACD and momentum. The price fell below the pivot point at $1.41 in the previous session and is now sitting midway between this level and the immediate support which is at $1.33.

Further selling pressure can see a test of this support and possibly send Cardano’s price even lower towards the next support at $1.20. However, given the high levels of volatility and unpredictability, in case the mood among investors turns back towards optimism, we could see ADA head back higher and face resistance at the $1.54 mark in the near-term.