The USD/INR closed at $74.790, after placing a high of $74.815, and a low of $74.567. The USD/INR currency pair extended its gains for the second consecutive session on Wednesday, amid the strength in the US dollar. The risk-off market sentiment and the weakness of the Indian rupee (INR), combined with the strength of the US dollar, pushed the USD/INR higher on board. The Goods & Services Tax (GST) data from India declined for the second straight month in June, falling below the one-trillion-rupee level for the first time in nine months, which weighed on the Indian Rupee and supported the prices of the USD/INR on Wednesday.

On Wednesday, the Gross GST collection for June stood at 928.49 billion INR, which is a reduction of approximately $12.45 billion compared to May’s 1.03 trillion INR. Despite the declining GST collection data, the Indian Foreign Minister, Subrahmanyam Jaishankar, said that India would witness a strong economic recovery while coming out of the second wave of the coronavirus. On Tuesday, the daily caseload of coronavirus infections in India plunged to the lowest level in four months. However health experts warn that the third wave of coronavirus infections could hit India in August.

USD/INR
In the last 111 days, India has recorded the lowest daily case number of 34,703, and the health ministry has also reported that 533 people have lost their lives in the past 24 hours due to the coronavirus. This was also the lowest fatality rate in 91 days, which means the national marginal recovery rate in India has improved to 97.17%. Meanwhile, the slow vaccination rollout throughout the country and the inaccurate data figures, coupled with the false claims of overcoming the second wave of the coronavirus, have put further pressure on the Indian Rupee, which has pushed the USD/INR higher.On the US front, at 19:00 GMT, the JOLTS Job Openings came in, showing a drop to 9.21M, against the forecast of 9.30M, which weighed on the US dollar, further capping gains in the USD/INR. At 19:01 GMT, the IBD/TIPP Economic Optimism figures were released, showing a reduction to 54.3, against the projected 57.3, which also weighed on the greenback and limited  the gains in the USD/INR for the day.
Moreover, the US Dollar Index that measures the value of the greenback against a basket of six major currencies, rose to 98.24on Wednesday, after the US Federal Reserve released the minutes of its June monetary policy meeting.The minutes revealed that Fed officials think that the goals of substantial further progress in economic recovery are still far from meeting the levels expected by the Federal Reserve, and before these levels are achieved, the Fed will not reduce its monetary support to the economy. This means that the Fed will not increase its interest rates or start any tapering of asset purchases before their goals are met.

These comments kept the US dollar supported on the day, but the US treasury yields suffered, falling to their  lowest level in four months, below 1.30%. However, the greenback remained green for the day and kept the USD/INR pair higher. 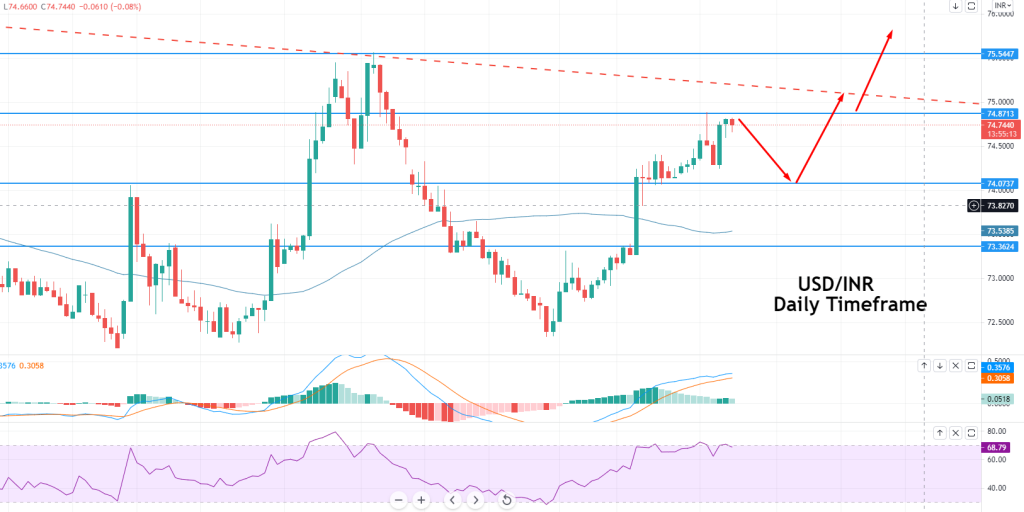 The USD/INR is on a bullish run, having soared from 74.07 to currently tradinge at 74.75. The Indian rupee faces immediate resistance at 74.87, which seems to extend a slight hurdle right now. However, the bullish engulfing pattern supports strong odds of a continuation of the bullish trend in the USD/INR.
Therefore, we may see a continued bullish trend in this currency pair, after a slight bearish correction. On the lower side, the USD/INR may find support at 74.07 now, and in case of a bearish breakout, the next support will prevail at around 73.35. On the higher side, the USD/INR may soar towards 75.54, upon a breakout of the 74.85 resistance level today. On Thursday, we may experience a slight dip in the INR, below the 74.87 level. Good luck!
Check out our free forex signals
Follow the top economic events on FX Leaders economic calendar
Trade better, discover more Forex Trading Strategies
Related Articles

Gold Supported Over 1,745 - A Quick Daily Outlook
5 days ago