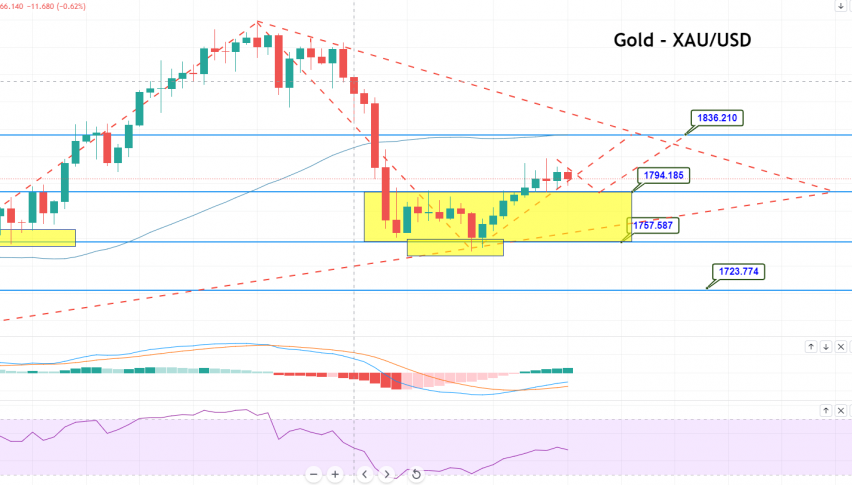 Gold Double Top Breakout – Is it a Good Time to Go Long?

On Monday, the yellow metal price failed to maintain its previous six-day uptrend, dropping below the $1,800 level, as a downbeat market sentiment put a safe-haven bid under the US dollar. This was understood as one of the key factors that kept the gold price under pressure, mainly due to its inverse relations with the dollar. Furthermore, the upticks in the US dollar were further bolstered after the minutes of the Federal Reserve’s June policy meeting confirmed that the world’s largest central bank is inching toward tapering its asset purchases during 2021. On a different page, the number of coronavirus (COVID-19) cases has picked up pace in major countries recently, which keeps weighing on the market trading mood.

The intensifying geopolitical tension in the Middle East and the Sino-American tussle put some additional pressure on the market trading mood. Thus, the downbeat market sentiment helped to limit deeper losses in the safe-haven gold prices. Besides this, the drops in the GOLD prices were also capped by the warning byWorld Health Organization (WHO) official, Mike Ryan, regarding the early reopening after Covid restrictions. Meanwhile, Facebook and Twitter shares are down, since the announcement that Donald Trump is using the tech giants again. This happened after the former President of the United States was banned from the social media companies, following January’s riots at Capitol Hill. At the time of writing, the yellow metal prices were trading at 1,797.89, and consolidating in a range between 1,796.36 and 1,805.62.

Despite the previous progress in the US economic recovery, the market trading sentiment failed to maintain its previous positive performance, becoming depressed on the day, as the renewed fears of a rise in the incidence of COVID-19 in some major countries, including the US and the UK, keep weighing on the market trading sentiment. As per the latest report, the coronavirus has recently spread out of the Asia-Pacific region, after the United Kingdom reported the highest number of new infections since late January.

Meanwhile, in California, the US has recorded a new variant of the virus, known as Epsilon, which is resistant to vaccines. At the same time, South Korea recorded an all-time high in cases, and Tokyo is also set to extend the virus-led state of emergency to late August. Australia’s Health Expert, Catherine Bennett, says that in order for states and territories to do away with lockdowns, many more Australians need to be vaccinated, so that outbreaks can be kept under control. The number of COVID-19 deaths exceeded the 4-million figure as of Jul. 8. As a result, Atlanta Fed President, Raphael Bostic, recently warned that the new rise in coronavirus cases, driven by the more virulent Delta variant, could cause consumers to “pull back” and slow down economic recovery in the US.

In addition to this, the sluggish trading mood could also be attributed to the intensifying geopolitical tension in the Middle East and the tension between China and the USA. As already mentioned, Facebook and Twitter shares also dropped when it was announced that Donald Trump was once again using the tech giants, after having been banned from these platforms after the riots in Capitol Hill in January, that he was accused of instigating. This turned out to be another key factor that kept the market trading sentiment under pressure. Thus, the prevalent risk-off mood put a safe-haven bid under the US dollar, and this was seen as one of the key factors that kept the gold price under pressure, due to the inverse relationship between the price of gold and the price of the US dollar.

The minutes of the Fed’s June meeting suggest that the central bank is tapering its asset purchases during 2021. Although Fed officials estimate that valuable progress on the economic recovery “is generally seen as not having yet been reached,” they agreed that preparation was needed, should asset tapering be required sooner than expected. On the USD front, the broad-based US dollar succeeded in maintaining its early-day winning streak, taking some fresh bids, as the market risk-off mood underpins the safe-haven assets, including the American currency. Another reason for the bullish US dollar could also be associated with the previously released minutes of the Federal Reserve’s June policy meeting, which confirmed that the world’s largest central bank is moving towards tapering its asset purchases as soon as this year. Therefore, the prevalent upticks in the US dollar were seen as one of the key factors that kept the precious metal price lower, due to its inverse relationship with the US dollar. 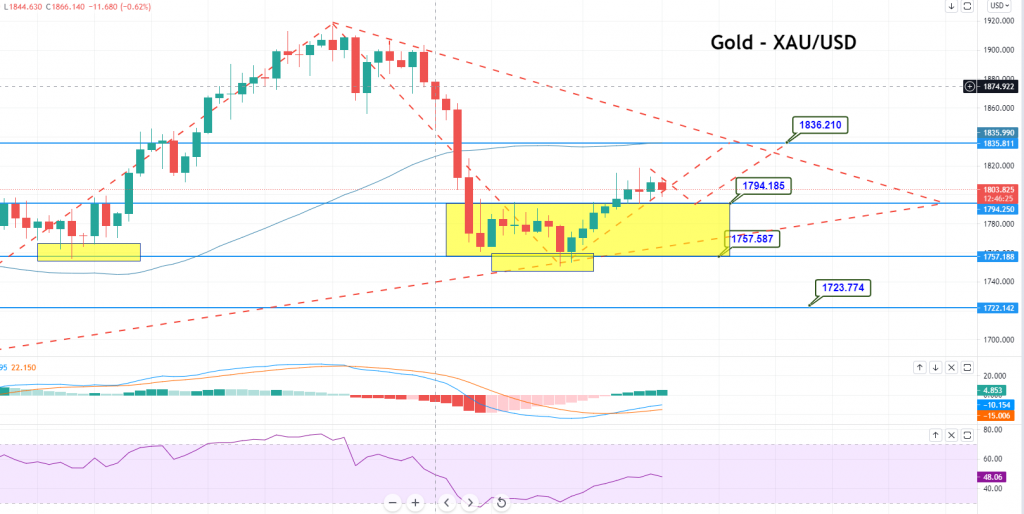 The precious metal, gold, is trading with a neutral bias at 1,801, violating the double top resistance level of 1,795. For now, this level is extending support to gold, and the odds of a continuation of the bullish trend remain high over the 1,795 level. As we can see on the 4-hour timeframe, the MACD has crossed over the 0 level, suggesting a strong bullish trend in GOLD. But at the same time, the RSI is in the selling zone. Moreover, gold is likely to close a tweezers top pattern on a daily timeframe. If this happens, the odds of a bearish correction could remain high. Today, let’s keep an eye on the 1,803 level, in order to capture a sell trade. We could see buying over the same level. Good luck!