Taking a Short in EUR/USD and NZD/USD, as US Inflation Expectations Pick up Further - Forex News by FX Leaders

Taking a Short in EUR/USD and NZD/USD, as US Inflation Expectations Pick up Further

Buyers are back in control

The US Dollar was in a major downtrend from March last year, as the FED and the US government turned very dovish, loosening up incredibly on monetary and fiscal policy. The EUR/USD surged to 1.2360s by the beginning of January, while the AUD/USD and the NZD/USD gained around 25 cents.

But, the sentiment seems to have changed for the USD, with the USD index DXY trading 3 points higher from the lows earlier this year. The EUR/USD tried to turn bullish again after the retreat to 1.17 towards the end of March, but it failed to make new highs for the year, or even to reach the previous ones.

That was a strong bearish sign, while now the FED is starting to turn hawkish –  it’s still a bit early to bet your house on it, but it’s in a better position than the ECB (European Central Bank). So, the USD is turning bullish, particularly against the Euro.

The retrace ended at the 100 SMA for the NZD/USD

The NZD is also turning bearish, after having lost around 350 pips in the last three weeks. We saw a retrace higher in the NZD/USD earlier today, but it seems to be ending after the New York expectations for household inflation  increased in June. So, we decided to take a short position in these two forex pairs, with the retrace higher already fading now.

Highlights of the NY household survey

Americans are feeling good about the job market, but that rise in inflation will get the Fed’s attention. Tomorrow we will finally get the CPI report, which is expected to come in at 4.9%. Below is the chart: 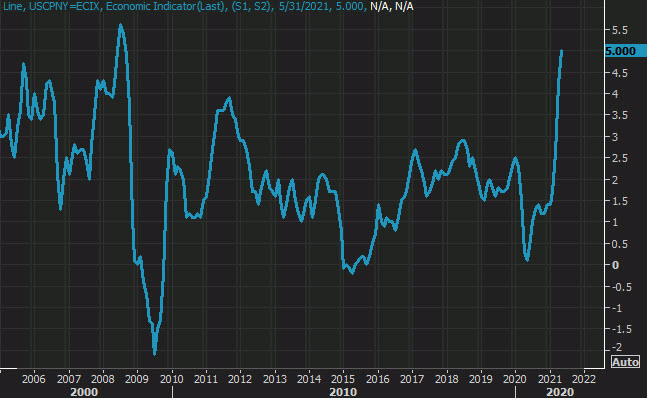 Inflation Jumps in Europe, But EUR/USD Reverses Down at the 200 SMA
3 days ago