The Pound Steady Ahead of CPI Data – Should We Expect More Strength? - Forex News by FX Leaders

The Pound Steady Ahead of CPI Data – Should We Expect More Strength?

For the past week, the pound has held steady against the dollar and has consolidated within narrow ranges. The pair has tested and retested the area around 1.374, a previous support level, providing proof of a crucial pivot area.

From a pin bar formed on June 8, prices turned bullish, but then the higher-than-expected US inflation rate began to weigh in and push the pound lower.

The GBP/USD is now hovering around the support area, as indecision develops in the market, ahead of UK inflation data. 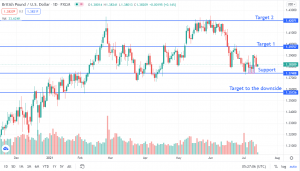 The GBP/USD daily chart shows that the pair demonstrated some bullish momentum from the start of the year. However, the momentum gradually waned, and the pair has been on a downtrend since the start of June.

The currency pair breached the support, which turned into resistance at around 1.397, before retesting it and trading lower. The pound is now muscling against the dollar, with the support area at around 1.374 proving hard to break.

Events that Shaped the GBP/USD this Week

Higher US inflation added strength to the dollar, prompting the GBP/USD to correct itself to the downside, amid the bullish momentum that was already developing.

BOE Governor Andrew Bailey. The BOE’s Bailey said on Tuesday that the finance committee would remain vigilant on risk and debt vulnerabilities. The governor warned that weak sectors are vulnerable to higher financing costs.

The statement by Bailey sent out a dovish tone, suggesting that the BOE is committed to economic support. This tone weighed on the pound, allowing the dollar to gain strength on Tuesday.

Let’s Take a Look at the Week Ahead

UK CPI Data: The UK is set to release its inflation data for June on Wednesday, to give an indication of how prices for various goods and services have been moving, compared to the past month and year.

● Similar to the US inflation data, UK CPI will be a market mover on the GBP/USD.
● Markets are warming up for higher prices, with inflation expected to come at 2.2% year on year, which is up from the previous month of 2.1%.

Should we see a stronger pound with higher inflation data?

Higher UK inflation will put more pressure on the BOE to act sooner by raising rates to maintain the central bank’s target. This could see the pound gaining strength from the current support area.

US PPI Data: The US is expected to release its producer price index on Wednesday, after the release of the UK CPI.

● PPI is interpreted as a leading indicator of consumer prices.
● When producers charge more for their goods and services, the cost is borne by the consumer.

The technical analysis confirms a potential buy trade on the GBP/USD. However, I would take the following into account before making a buy move:

As a prudent trader, I will wait for prices to retest the support, before entering a buy trade, based on the above conclusions. This will lower my risk-reward ratio to a possible 1:3 target.

Will the BOE Show Concerns About Inflation in Today's Meeting?
3 days ago