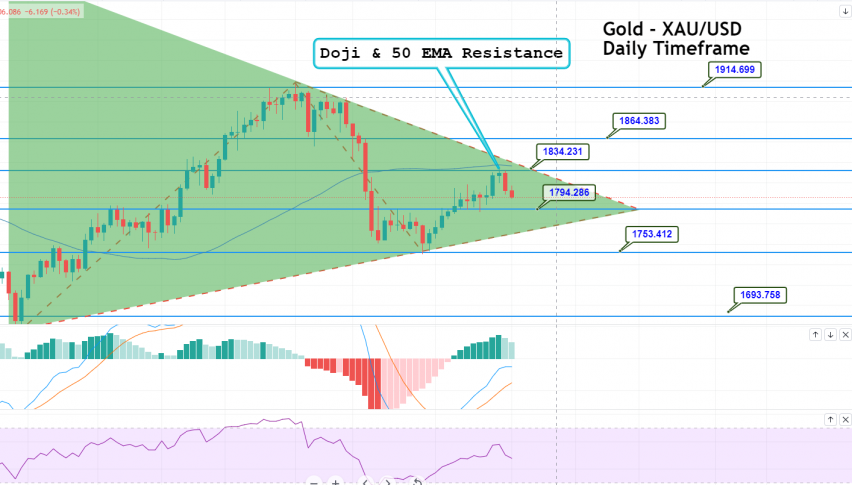 During Monday’s Asian trading session, the precious metal failed to stop its early-day downward rally and dropped below the $1,812 level, as the market risk-off mood put a safe-haven bid under the safe-haven US dollar. This turned out to be one of the key factors that kept the GOLD price under pressure, due to its inverse relationship with the dollar.

The US dollar traded near its highest levels in months on the day, as the ever-increasing spread of the Delta variant of the coronavirus is making investors worried about global economic recovery. As a result, many have sent their money into safety. Furthermore, the downticks in the US dollar were further bolstered by the reports suggesting that gold was sold at discount prices in India last week, for the first time in about a month, as rising prices discouraged the bulls.

In contrast to this, the lower US Treasury yields and concerns over the rising number of COVID-19 cases keeps helping to limit any deeper losses in gold. In addition to this, the long-lasting Sino-American tussle has put some additional pressure on the market trading sentiment. Therefore, the downbeat market mood has helped to cap the downtrend in the safe-haven precious metal. Gold is trading at 1,812.19, and consolidating in the range between 1,812.19 and 1,812.19.

On the coronavirus front, as per data released b the Johns Hopkins University, the number of COVID-19 cases across the globe exceeded 191,229,700 as of Jul. 19. As a result, some countries, including Australia and South Korea, have re-imposed restrictive measures to control the spread of their most recent outbreaks, including the Delta variant. In the meantime, the UK’s “Freedom Day” is receiving massive criticism from the opposition parties, as the country has now recorded the highest number of COVID-19 infections since early January. It should be noted that the newly appointed UK Minister of Health, Sajid Javid, has also tested positive for the virus; immediately thereafter, UK PM Boris Johnson chose to isolate himself.

Japan has also recorded a rise in COVID-19 cases in the Olympic village, just days before the Tokyo Olympics are due to open on Jul. 23. Generally, the mounting numbers of cases across the globe have raised doubts over global economic recovery and this is weighing on the market trading sentiment. Thus, the risk-off market sentiment is putting a safe-haven bid under the US dollar, which was seen as one of the leading factors that kept the gold price under pressure, as the price of gold is inversely related to the price of the Greenback.

On the US-China front, the tussle between the two financial giants has picked up further pace, as the United States took a tough stand against the Dragon Nation, due to various human rights and trade issues. As per the latest report, “US Congress is trying to stop China’s ability to recruit scientists and academics in the US, as part of broader moves from Washington, to confront the Asian nation’s growing clout.”

Stronger US Dollar Weighs on Gold

On the USD front, the broad-based US dollar succeeded in maintaining its bullish early-day rally and took some further bids near its highest levels in months on Monday, as the market risk-off mood tends to underpin the safe-haven assets, including the US currency. The dollar also grew broadly against Asian currencies. The upticks in the greenback were seen as one of the leading factors that kept the prices for the precious metal lower, due to its negative correlation to the US dollar. The lack of significant data/events will keep market traders inactive throughout the day. Market traders will focus firmly on the COVID-19 updates, and the headlines over the Sino-US tussle will also be key to watch. 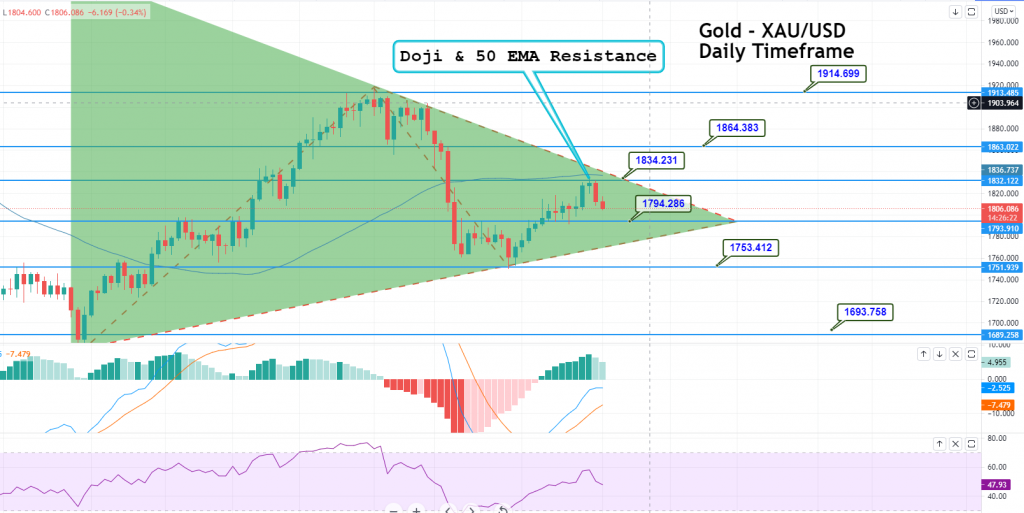 On Monday, the precious metal, gold, is trading with a bearish bias at a 1,805. On the daily timeframe, the yellow metal has closed a Doji pattern below 1,834, and a bearish engulfing candle immediately thereafter. This is now driving a solid selling trend in gold. On the lower side, the gold price could dip until the 1,794 level, and a further breakout at 1,794 could lead the GOLD price towards the next support level of 1,778. The MACD and RSI support a selling trend and the 50 EMA is also putting pressure on the gold price. Consider taking a sell trade below 1,807, to target the 1,794 level today. Good luck!
Check out our free forex signals
Follow the top economic events on FX Leaders economic calendar
Trade better, discover more Forex Trading Strategies
Related Articles