Buying USD/CAD at the 100 SMA, as Canadian Inflation Cools Off - Forex News by FX Leaders

Buying USD/CAD at the 100 SMA, as Canadian Inflation Cools Off

Inflation has surged in the US, coming in at 5.1% in May and at 5.5% in June, with oil prices on the rise during those months and the economy surging too. This has increased the pressure on the FED to start looking seriously into tightening the monetary policy. Later this evening, the FED will have their regular meeting, so we will soon see where they stand now.

Inflation has increased all over the globe, as the global economy has bounced quite strongly during late spring and summer so far, after the second reopening, following last winter’s restrictions. In Europe and Canada, inflation reversed after the dip toward the end of 2020. But in the EU, the CPI (Consumer Price Index) inflation has stagnated at around 1.9-2%, as the latest report showed, and this has taken some pressure off the ECB (European Central Bank).

The 100 SMA holds as support for USD/CAD again

Today, Canadian inflation cooled off slightly, which made the USD/CAD jump higher. We decided to buy this pair after the retrace down to the 100 SMA (green) on the H4 chart. So, this trade looks good at the moment, as the Bank of Canada is more relaxed since June’s CPI report. Below is the Canadian inflation report for June: 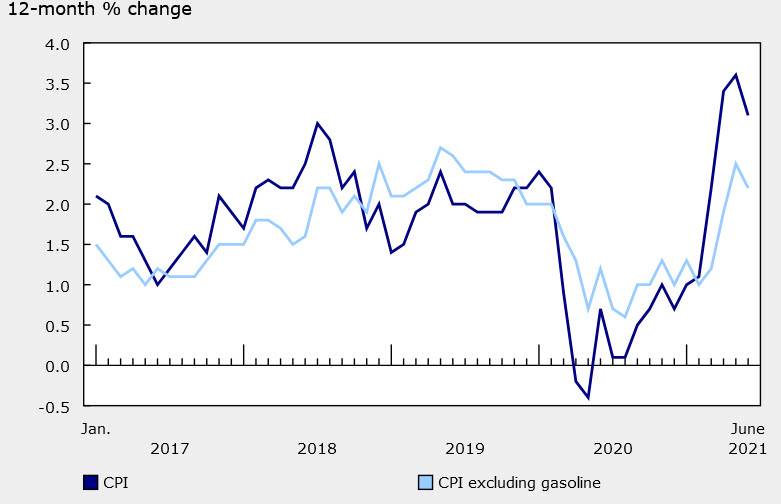 The USD/CAD was trading at 1.2568, ahead of the release, and climbed to 1.2580 later. If we’ve seen the peak in this data then it will significantly diminish the pressure on central banks to raise rates and taper. In terms of details, shelter rose by 4.4% and transportation by 5.6%, while gasoline slowed to 32.0% from 43.4%.

USD/CAD
Shelter prices are going to be a big problem in Canada and elsewhere, driving persistently high inflation numbers. A dig into the data shows why. Rental and buying costs are going up, but that’s been offset by an 8.6% decline YoY in the mortgage cost index, due to lower interest rates. However, rates can only go in one direction now, so that will soon give prices some tailwind, while higher rents slowly work their way through.
Check out our free forex signals
Follow the top economic events on FX Leaders economic calendar
Trade better, discover more Forex Trading Strategies
Related Articles

USD/CAD Continues the Bounce, After BOC Keeps Keeps the Same Bias
3 weeks ago