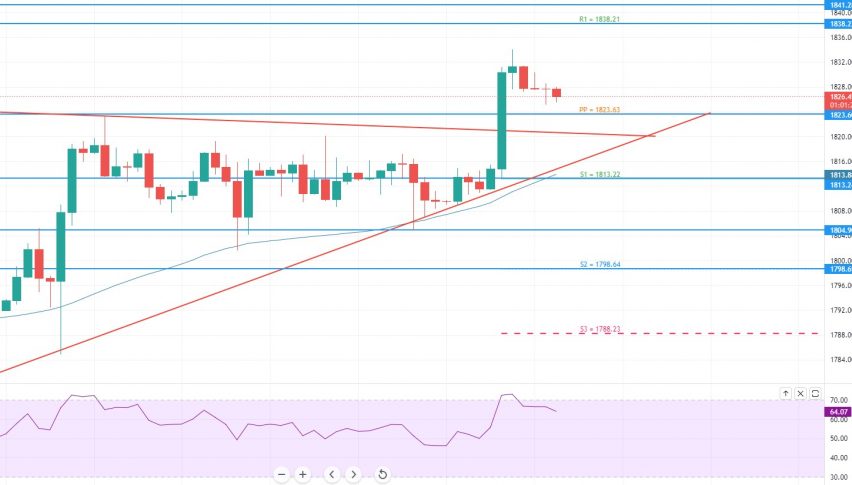 Gold prices closed at $1833.70 after hitting a high of $1836.90 and a low of $1810.90. GOLD reversed its course and surged on Friday after remaining under consolidation for the previous four sessions.

Gold advanced to its two and a half month high level on Friday after rising more than 1% amid a slower-than-expected U.S. job growth in August, which weighed on the U.S. dollar and cast doubts on the tapering timeline by the Federal Reserve.

On Friday, the U.S. Dollar Index that measures the greenback’s value against the basket of six major currencies remained depressed and declined for the 6th consecutive session to its lowest in one month at 91.95. At the same time, the U.S. Treasury Yields on the benchmark 10-year note rose on Friday and reached 1.336%.

The highly awaited labor data from the U.S., which has been driving the market for the whole week, came short of expectations and showed that U.S. employers added about 235,000 jobs in August, which was less than a third of the forecast of 733,000.

The dismal jobs data from August was due to a continued struggle with the country’s rising spread of Delta variant  cases. The highly awaited data failed to keep up with the hopes of investors waiting for the report to come in as expected and push the Fed to provide any specific timeline for tapering.

On the data front, at 17:30 GMT, the Average Hourly Earnings from August surged to 0.6% against the projected 0.3% and supported the U.S. dollar, which capped further gains in gold prices. The Non-Farm Employment Change dropped to 235K against the forecast 733K, weighed on the U.S. dollar, and pushed gold prices higher. The Unemployment Rate in August remained flat with expectations of 5.2%. At 18:45 GMT, the Final Services PMI also came in line with the projections of 55.1. At 19:00 GMT, the ISM Services PMI was also unchanged from the expected 61.7.

The timeline for tapering was said by Jerome Powell to be guided by job growth and the progress of the economy from the pandemic. Still, the NFP data on Friday showed that job figures have declined due to the pandemic and the greenback came under pressure, which ultimately lifted gold prices higher for the day towards multi-month highs.

The precious metal GOLD is still consolidating in a wide trading range between 1,833 and 1,823. The bullish trend continued to rule the market on Monday. The immediate resistance level for gold remains at 1,833, and a positive breakout of this level exposes the precious metal to 1,837 and 1,848. The metal’s immediate support remains at the 1,823 level, and a breach below that level exposes the pair to the 1,812 level.

Gold is trading on fundamentals, and Asian investors appear to have factored the weaker than predicted US nonfarm payroll data. The RSI is currently in a selling zone, while the pivot point around 1,823 continues to support gold. Good luck!