During Monday’s Asian trading hours, the precious metal price failed to stop its early-day downward rally, hitting its lowest level in more than five weeks, at around the $1,750 level, due to the renewed strength in the US dollar. Following in the footsteps of US bond yields, the greenback rose above 93.00 for the first time since August 22. Renewed speculation regarding an earlier tightening of policy by the Fed acted as tailwind for the dollar.

This, in turn, kept the non-yielding yellow metal under pressure, as higher dollar valuations made GOLD expensive for investors who hold other currencies. It is worth recalling that the biggest single-day drop of $30 was seen last week, after the release of higher-than-expected US retail sales data.

A strong retail sector indicates higher consumer sentiment, which could mean a more hawkish Fed during its two-day meeting next week. Moreover, the benchmark US 10-year Treasury Yield is still flashing green at 1.36%, with a gain of 0.49%. This further underpinned the greenback. Alternatively, as reflected by the 0.15% decline in the S&P 500 Index, the risk-off market sentiment appears to be assisting gold in finding safe-haven demand and limiting its losses.

Traders seem cautious about placing any strong positions ahead of the much-anticipated FOMC meeting, as they wait for clues about the timeline for slowing the central bank’s $120 billion monthly bond purchase program. Currently, the XAU/USD is trading at 1,750.59, and consolidating in the range between 1,742.87 and 1,755.24.

Evergrande Headlines: Virus Fears and Anxiety Ahead of the FOMC

The prevalent selling bias surrounding the gold prices was mainly due to higher-than-expected US retail sales data. A strong retail sector shows a better consumer sentiment, which could mean a more hawkish Fed in its two-day meeting next week. In the meantime, the benchmark US 10-year Treasury yield rose to 1.36%, with a gain of 0.49%.

The US dollar rose above 93.00 for the first time since August 22, following the trend of the US bond yields. The greenback hit a three-week high, which was seen as a key factor that extended the selling pressure to the dollar-denominated commodity. However, renewed speculations regarding the Fed tightening of policy sooner than expected, gave the dollar a boost. The strength of the broad-based US dollar was seen as another key factor that kept gold prices under pressure, due to their safe-haven allure.

Looking forward, market traders will keep their eyes on the latest US Federal Reserve policy decision. Traders are all focused on whether the Fed will announce the start of asset tapering when it hands down its policy decision on Wednesday. In the meantime, the headlines over the Evergrande and the virus concerns will be key to watch. 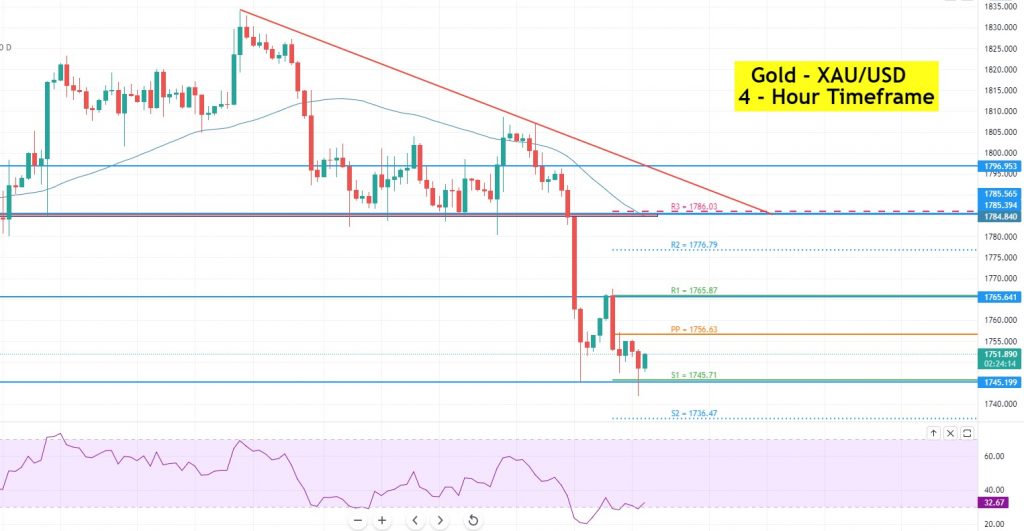 On Monday, the precious metal, gold, is trading at the 1,752 level, having broken through the 1,756 support level. On the downside, the yellow metal is finding immediate support at around 1,745, with a bearish breakthrough below this level exposing the metal to 1,736 and 1,725.