But, the main factor has been the petrol issues in the UK. There seem to be some Oil shortages coming from transportation, but the real reason we know is the renewable energy plans from main global institutions, which is going to have a negative impact for the GBP, so we think that GBP/USD will reverse down, hence the sell forex signal.

The UK Petrol Retailers Association warned that fuel is starting to run dry in some areas of the country as delivery problems and panic-buying has resulted in a rather problematic shortage in the past week or so. UK PRA says members reporting 50% to 90% of petrol stations running dry in some areas. It is a bad time for the UK economy to be hit with such a problem.

This is just yet another problem for the economy in general as growth conditions are winding down after peaking during the summer and the ongoing hit to supply chains and capacity constraints have stifled the recovery process going into Q4.

More on the UK shortage of fuel delivery drivers, with plans for army intervention

Some petrol (OK, gasoline if you insist) outlets in the UK are having trouble getting an adequate supply. The UK press now report government Ministers have discussed contingency plans for soldiers to drive petrol tankers to forecourts. Plans would be acted upon if there is significant further deterioration in the supply situation. Motorists have been urged not to stockpile buy.

One problem after another

There’s no bigger environmentalist than me but cutting off investment in fossil fuels why the world is using as much oil and gas as ever is only going to lead to more of what we’re seeing in Europe at the moment.

Natural gas on the other hand: 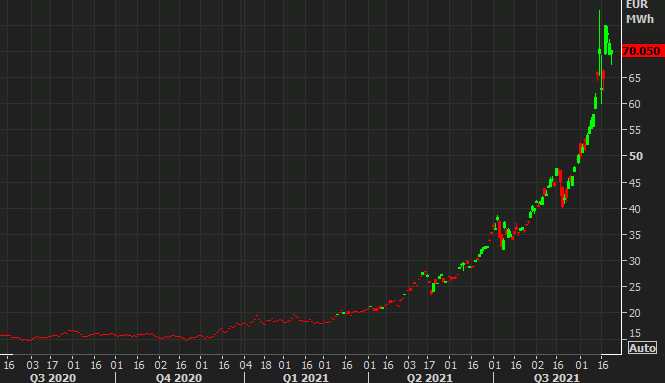