USD/JPY   has turned extremely bullish for the past week or so. It has climbed from above 109 which is a support zone to 111.60s. Pullbacks have been extremely shallow and today’s one looks to be the deepest. The price has retreated to the 20 SMA (gray) on the H1 chart where we decided to go long on this pair.

The reason for the decline was the softening of the US Conference Board consumer confidence number this month. It slowed to the weakest level since February but it doesn’t mean much right now. The economy is going well and employment is growing, so the sentiment remains positive, hence the bullish momentum in USD/JPY since a week ago. Below is the US CB consumer confidence report, which shows a miss in expectations this month. Although I expect a reversal higher in the coming months. Jobs hard-to-get increased instead, which is an indication for improvement.

US September consumer confidence data from The Conference Board 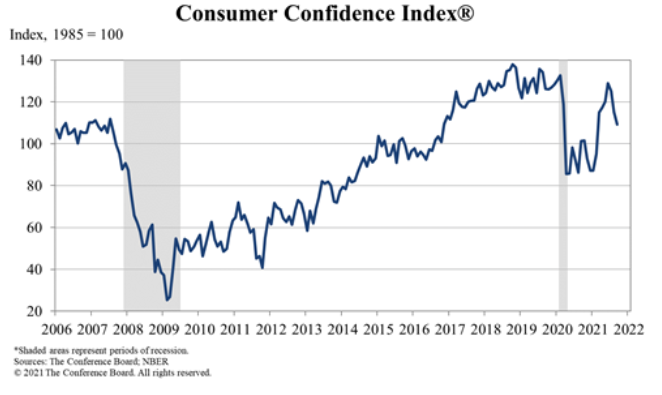 “Consumer confidence dropped in September as the spread of the Delta variant continued to dampen optimism,” said Lynn Franco, Senior Director of Economic Indicators at The Conference Board. “Concerns about the state of the economy and short-term growth prospects deepened, while spending intentions for homes, autos, and major appliances all retreated again. Short-term inflation concerns eased somewhat, but remain elevated. Consumer confidence is still high by historical levels-enough to support further growth in the near-term-but the Index has now fallen 19.6 points from the recent peak of 128.9 reached in June. These back-to-back declines suggest consumers have grown more cautious and are likely to curtail spending going forward.”

Good Time to Buy US WTI Crude Oil, As It Bounces Off the 100 SMA After Last Week's Retreat?
2 days ago