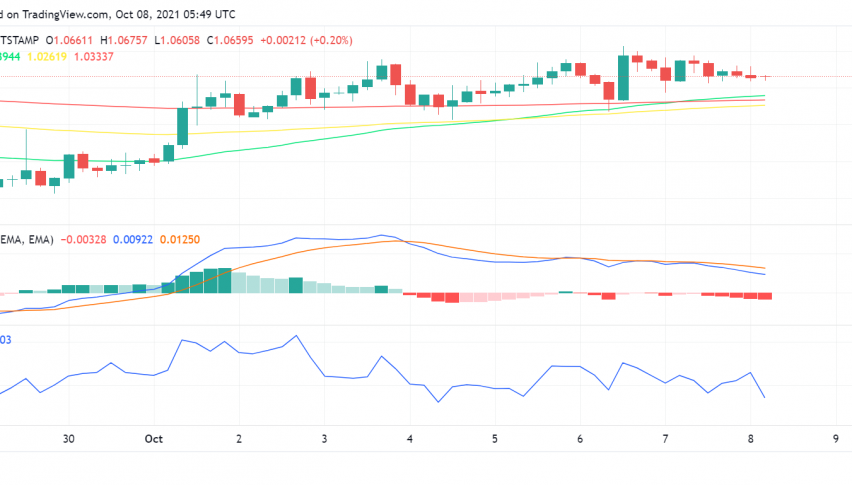 The price of Ripple’s XRP appears to be rotating around the $1.05 level, indicating indecision among investors towards the sixth largest cryptocurrency as they hesitate from making fresh moves amid uncertainties surrounding the lawsuit with the SEC. At the time of writing, XRP/USD is trading at around $1.06.

Earlier this week, we told you about an important development in the SEC vs. Ripple lawsuit with a judge granting Amicus Curiae status to XRP holders, letting them weigh in on the legal developments pertaining to the case and state their insights which could affect the outcome. This was a significant progress in the case which several experts stated could tilt the legal tussle in Ripple’s favor.

However, since then, there has been no update on when the XRP holders need to submit their briefs to the court. The uncertainties around the case have been further heightened as the court has not yet announced a date for other significant developments, including when it will discuss Ripple’s motion to demand how the SEC applies the Howie Test to its XRP transactions, the motion to strike Fair Notice defense as well as when the court would discuss the motion filed by Ripple executives Brad Garlinghouse and Chris Larsen to dismiss the case.

On the fundamentals front, XRP could find some support from a recent partnership between Qatar National Bank (QNB) and RippleNet for use of its On-Demand Liquidity (ODL) service to facilitate fast and efficient cross-border payments. The partnership with RippleNet will enable remittances to Turkey as well as other countries using its technology.

Meanwhile, Ripple’s team of developers is gearing up for a preview of a significant upgrade to the XRP Ledger (XRPL) technology. After discussing the concept of Federated Sidechains for the first time back in June, RippleX has announced an engineering preview that developers can use to experiment with applications in the DeFi, interoperability and NFT sectors. The expansion of the technology into these emerging areas could further boost the appeal of Ripple’s XRP among investors and users going forward.

In addition, XRPL recently revealed a prototype of its Proof of Payments protocol xPoP at the Apex Developer Summity in Tallin. xPoP will allow Ripple’s blockchain to initiate transactions on its network even without an internet connection, potentially paving the way for instant offline payments via a QR-code. This revolutionary technology could drive immense adoption and acceptance of digital payments among mainstream sectors in the coming years.

According to a recent poll by digital asset investment company CoinShares, XRP is among the cryptocurrencies investors are most bullish on, after market leaders Ethereum and Bitcoin. XRP shares the stage with other leading peers, including Cardano, Polkadot, Solana and Terra’s LUNA in the poll, indicating strong interest in the crypto among investors despite its ongoing legal issues.

On the H4 chart of XRP/USD, the smaller moving averages in addition to the leading technical indicators MACD and momentum point to selling interest. However, the larger timeframe MAs are exhibiting a bullish bias in the market.

Ripple’s XRP is holding above the pivot point at $1.01 and an uptick in buying pressure could take it higher until the first resistance at $1.13. In case the sentiment remains optimistic in the overall market, the price could rally higher and overcome the $1.20 mark as well until the second resistance at $1.21.

Will the Decline End for Cardano (ADA) and Ripple (XRP)?
2 days ago