Can the Rise in DeFi TVL Support Avalanche (AVAX) in the Near-Term? - Forex News by FX Leaders 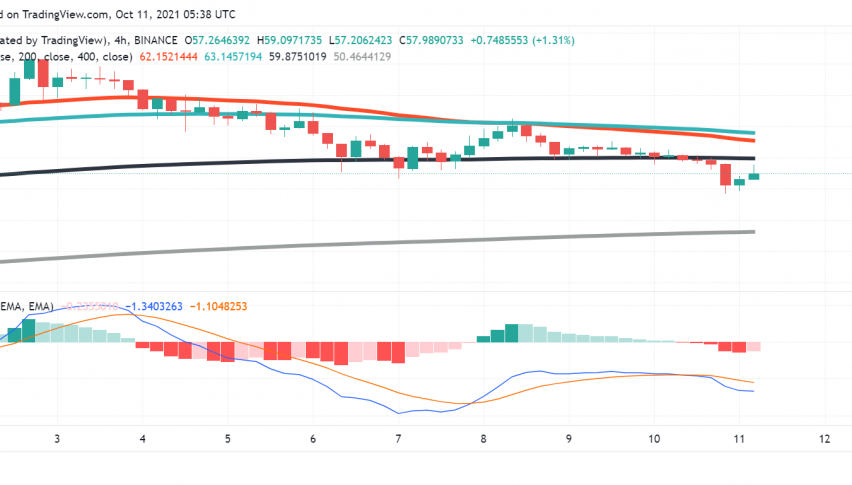 Can the Rise in DeFi TVL Support Avalanche (AVAX) in the Near-Term?

Avalanche (AVAX) is on the climb in early trading on Monday, making gains and reversing losses from the previous session, supported by the strong interest in DeFi projects running on its platform among users. At the time of writing, AVAX/USD is trading around $57.98.

The total value locked (TVL) in DeFi projects on the Avalanche ecosystem has been climbing higher steadily over the past few weeks, sitting at just above $5.1 billion at present. Among them, market leader Aave (AAVE) accounts for the lion’s share of over 36% and enjoys a TVL of $1.86 billion. The Avalanche Rush incentive program helped the DeFi protocol see its TVL surge by almost $1 billion a week ago, generating higher levels of liquidity and interest even as a vote remains ongoing to see if Aave should move out of Ethereum completely and onto Avalanche’s blockchain.

However, even as the market sentiment improves towards crypto king Bitcoin which has crossed the $56,000 level and is heading on higher, Avalanche has seen a muted performance since the beginning of this month. This is keeping with a slight dip in its trading volume, a possible indicator that users and investors could be losing interest in AVAX as an asset.

This could be the result of a wider trend being seen in the crypto market with altcoins registering lower action overall as investors solely focus on the larger players, especially Bitcoin. Unlike in previous months, the increased investor confidence in Bitcoin has failed to fuel rallies in other coins across the board, suggesting that the market leader remains the sole player in the spotlight at the moment.

Looking ahead, the outlook for Avalanche could remain supported by the growth in its adoption and use among DeFi projects and users. Other popular protocols like BENQI and Trader Joe also have a TVL of around $1 billion each at the moment and an uptick in activity on these projects can also drive AVAX higher in the near term.

The key strengths that Avalanche offers in the DeFi space is its compatibility with Ethereum via the EVM. In addition, it offers a higher throughput of 4,500 TPS with no hassles such as high gas fees and congestion that plague Ethereum’s ecosystem, empowering developers with higher levels of scalability and robustness.

On the H4 chart of AVAX/USD, moving averages and the MACD are suggesting a strong bearish bias among investors at the moment. However, the momentum indicator points to some buying interest as well.

Avalanche’s price is sitting just under the pivot point at $60.23 but is far from the immediate support at $51.71. We need to keep a close watch on the pivot point for now as more buying pressure can see the level being overcome. However, if the selling action builds up, we could see AVAX head lower in this session towards testing the support.