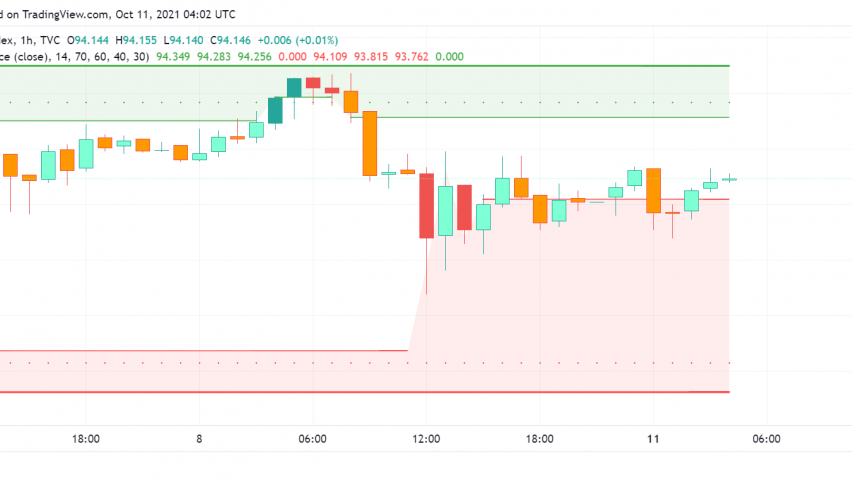 The US dollar is starting the brand new trading week on a strong note, surging to the highest levels seen in 30 months against safe haven Japanese yen, supported by expectations firming up about an upcoming tapering of asset purchases by the Fed starting in November. At the time of writing, the US dollar index DXY is trading around 94.14.

Expectations of the Fed starting the process remain strong despite the shockingly low number of jobs added in the US economy through the previous month. The non-farm payrolls data which released during the previous session revealed the number of jobs added in September stood at 194k, well below economists’ forecast which was for a reading of 500k.

On a positive note, however, the unemployment rate fell to 4.8% – the lowest levels seen since 18 months, offering some hope to investors that Fed policymakers will stay on course with the plans shared during their most recent meeting. In addition, average hourly earnings also improved from 0.4% in August to 0.6% in September, a sign of recovery in the US labor market.

This data helped drive up the benchmark 10-year US Treasury yields to over 1.6% – the highest levels seen in four months. The spike in bond yields further increased the appeal of the US dollar among investors, sending it higher against its major peers.

Analysts forecast an extended period of bullishness for the greenback in the coming weeks, powered by the Fed’s upcoming hawkish tilt. Later this week, all eyes will be on the CPI data and strong inflationary pressures could further reinforce expectations for the Fed to power through with the tapering process and implement a rate hike by next year.

US Dollar Steadies But Supported by Rising Bond Yields, Strong Data
3 days ago