Manufacturing Remains in Good Shape in Europe, But EUR/UD Headed for 1.10 and Lower - Forex News by FX Leaders

Manufacturing Remains in Good Shape in Europe, But EUR/UD Headed for 1.10 and Lower

The Eurozone economy recovered well during Q2 of this year, after the second recession last winter, with manufacturing and service PMI indicators increasing above 60 points, which suggests enormous economic expansion.

The US economy cooled off a bit toward the end of summer, but it has picked up again and inflation is surging, which has turned the FED hawkish now. European economies are accelerating again, as today’s manufacturing and services reports showed, but that’s not helping EUR/USD which is heading for 1.10, as the ECB refuses to acknowledge inflation in Europe. 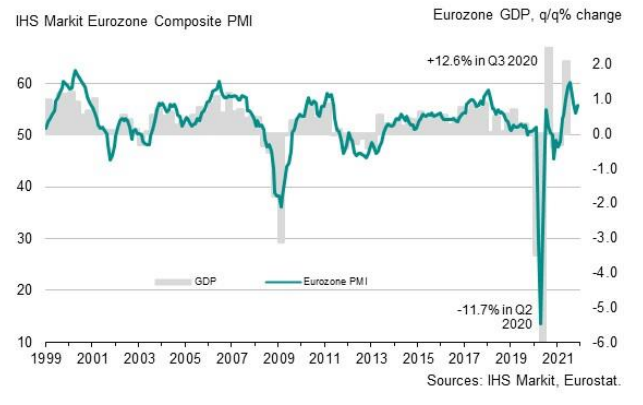 The French and German readings earlier served as a prelude to the beats in the overall Eurozone report here, reaffirming a modest improvement in business activity in both the services and manufacturing sector this month. However, as mentioned, it belies the ongoing concerns on the outlook and that is arguably the more important detail to be wary about. Markit notes that:

“A stronger expansion of business activity in November defied economists’ expectations of a slowdown, but is unlikely to prevent the eurozone from suffering slower growth in the fourth quarter, especially as rising virus cases look set to cause renewed disruptions to the economy in December.

“The manufacturing sector remains hamstrung by supply delays, restricting production growth to one of the lowest rates seen since the first lockdowns of 2020. The service sector’s improved performance may meanwhile prove frustratingly short-lived if new virus fighting restrictions need to be imposed. The travel and recreation sector has already seen growth deteriorate sharply since the summer.

“With supply delays remaining close to record highs and energy prices spiking higher, upward pressure on prices has meanwhile intensified far above anything previously witnessed by the surveys.

“Not surprisingly, given the mix of supply delays, soaring costs and renewed COVID-19 worries, business optimism has sunk to the lowest since January, adding to near-term downside risks for the eurozone economy.” 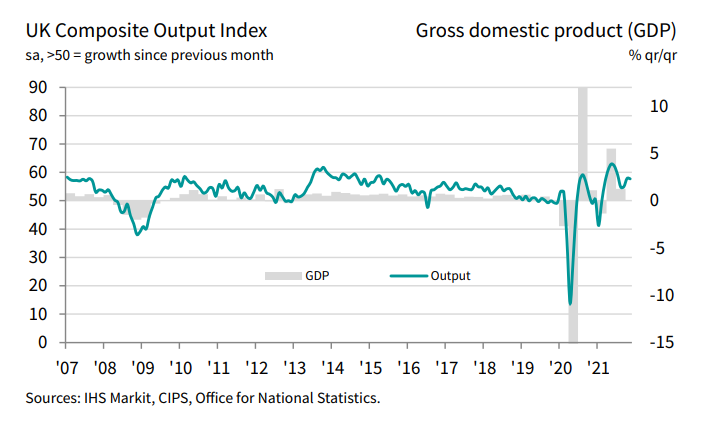 A slight softening in the services sector outweighs a mild jump in manufacturing output, bringing overall business activity in the UK to a two-month low. However, the standout detail in the report is that the latest increase in average cost burdens was the fastest since this index began in January 1998.

Of note, around 63% of UK private sector companies reported an increase in their average cost burdens during November, while only 1% signaled a decline. Markit notes that:

“Output growth across manufacturing and services came in slightly faster than expected in November, albeit heavily skewed towards the service sector as factories continued to struggle with supply shortages and falling exports.

“Encouragingly, an acceleration in growth of new business hints that December should bring a strong end to the year, meaning the fourth quarter should see a welcome pick up in GDP growth after the slowdown seen in the third quarter.

“For policymakers concerned about the health of the labour market after the end of the furlough scheme, the buoyant jobs growth signalled should bring some reassuring comfort.

“A record increase in firms’ costs will meanwhile further stoke fears that inflation will soon breach 5%, with lingering near-record supply delays adding to indications that price pressures may show few signs of abating in the near-term.

“The relatively poor performance of manufacturing is likely to remain a concern for some time, however, as is the potential to see tighter growth-inhibiting COVID-19 restrictions applied amid high COVID-19 case numbers both at home and now also in continental Europe. The latest survey results will none the less likely shorten the odds of an interest rate hike at the Bank of England’s December meeting.”

Check out our free forex signals
Follow the top economic events on FX Leaders economic calendar
Trade better, discover more Forex Trading Strategies
Related Articles
Can the ECB Keep the Rate Hike Pace as Eurozone GDP Contracts?
EUR/USD has been bullish since October, but the move might have come to an end and we are seeing a slow reversal lower ahead of the ECB
6 hours ago

Forex Signals Brief for January 31: Will EU GDP Decline In Q4 Be Bigger After Yesterday's German GDP?
8 hours ago