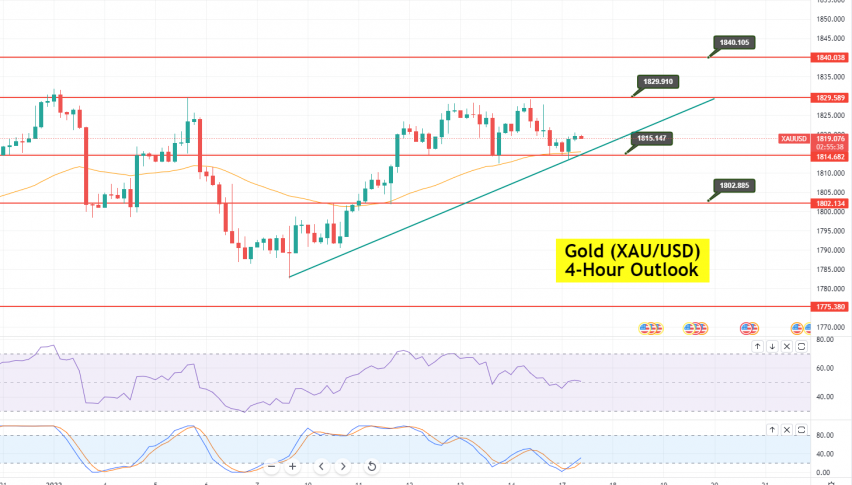 During Monday’s Asian trading session, the yellow metal succeeded in extending its early-day winning streak, drawing some further bids well above the $1,820 level, amid a risk-off market sentiment. This tends to underpin safe-haven assets like gold. However, the downbeat market sentiment was under pressure, due to concerns about the coronavirus and a Fed rate hike.

XAU/USD
The S&P 500 futures fell by 0.20 percent intraday, as bond movements were limited, due to a bank holiday in the United States. It’s worth mentioning that US 10-year rates climbed 8.4 basis points (bps) on Friday, snapping a four-day downward trend and finishing at 1.793 percent. When it opened on Monday, the price of XAU/USD was trading near Friday’s closing figure. Markets responded defensively to weak US economic statistics for December, which might weigh on Asian equities.Meanwhile, in Asia, the US dollar traded lower on Monday morning, after the People’s Bank of China (PBOC) unexpectedly reduced its benchmark rate. The losses in the US dollar were further bolstered by poor US data that was released previously, which tends to influence the US economy and add to the negative pressure on the currency. As a result, a lower US dollar was considered one of the significant factors driving the XAU/USD prices upward.

Currently, the safe-haven metal is trading at the 1,819.07 level, and consolidating in the range between 1,813.20 and 1,820.28. Moving on, the lack of essential data/events from the United States for the day urges investors to pay attention to China’s GDP and other crucial figures for immediate direction.

Despite the absence of significant data/events for the day from the US, the market trading mood failed to stop its poor overnight performance and remained in the red on the day. However, the market trading mood reacted to the fears emanating from the coronavirus and the Fed rate hike. After experiencing more than 20,000 daily infections for the third day in a row, Beijing, China, has tightend the regulations for entrance into the capital city, while Japan is considering heightened virus-related limitations for Tokyo.

On the other hand, Australia is experiencing its fourth consecutive day of easing daily COVID infections, with the latest count at around 65,000. It is worth noting that with 29 deaths on Friday, Australia’s most populated state, New South Wales (NSW), had the highest number of daily COVID-related fatalities, but the figure has since dropped to 17.

During his hearing before the Senate Banking Committee last week, Fed Chairman Jerome Powell stated that the US economy is ready to begin tightening monetary policy. Other Fed officials have stated that interest rates are most likely to be raised in March 2022. The Fed will meet on January 25-26 to make its next policy decision, while the Bank of England will decide on February 3.

On the data front, retail sales in the United States fell by 1.9 percent on a year-over-year basis, with sales in the control group down by 3.1 percent. ANZ Bank analysts explained that the figures imply that the highest inflation in 40 years is affecting consumer behavior, and this could easily extend into the first quarter when the expiration of child tax credits will also weigh on the behavior of consumers. Manufacturing fell by 0.3 percent year on year, while industrial production fell by 0.1 percent.

According to ANZ Bank analysts, “a 1.3 percent reduction in automobiles and auto parts drove manufacturing weakness.” As a result, S&P 500 futures fell by 0.20 percent intraday, while US 10-year Treasury futures fell even further. Thus, safe-haven gold benefited from a generally negative tone in the equity markets. Moving on, the lack of essential data or events from the United States urges investors to pay attention to China’s GDP and other crucial figures, for immediate direction. Finally, virus updates and Fed rate hike anxieties have become the most critical factors.

The precious metal, gold, is trading at 1,819, having bounced off the support level of 1,815. Currently, gold is exhibiting a slightly bullish bias above 1,815, and it is likely to find the next resistance at 1,829, and a break above this could lead the gold price towards the 1,840 level. 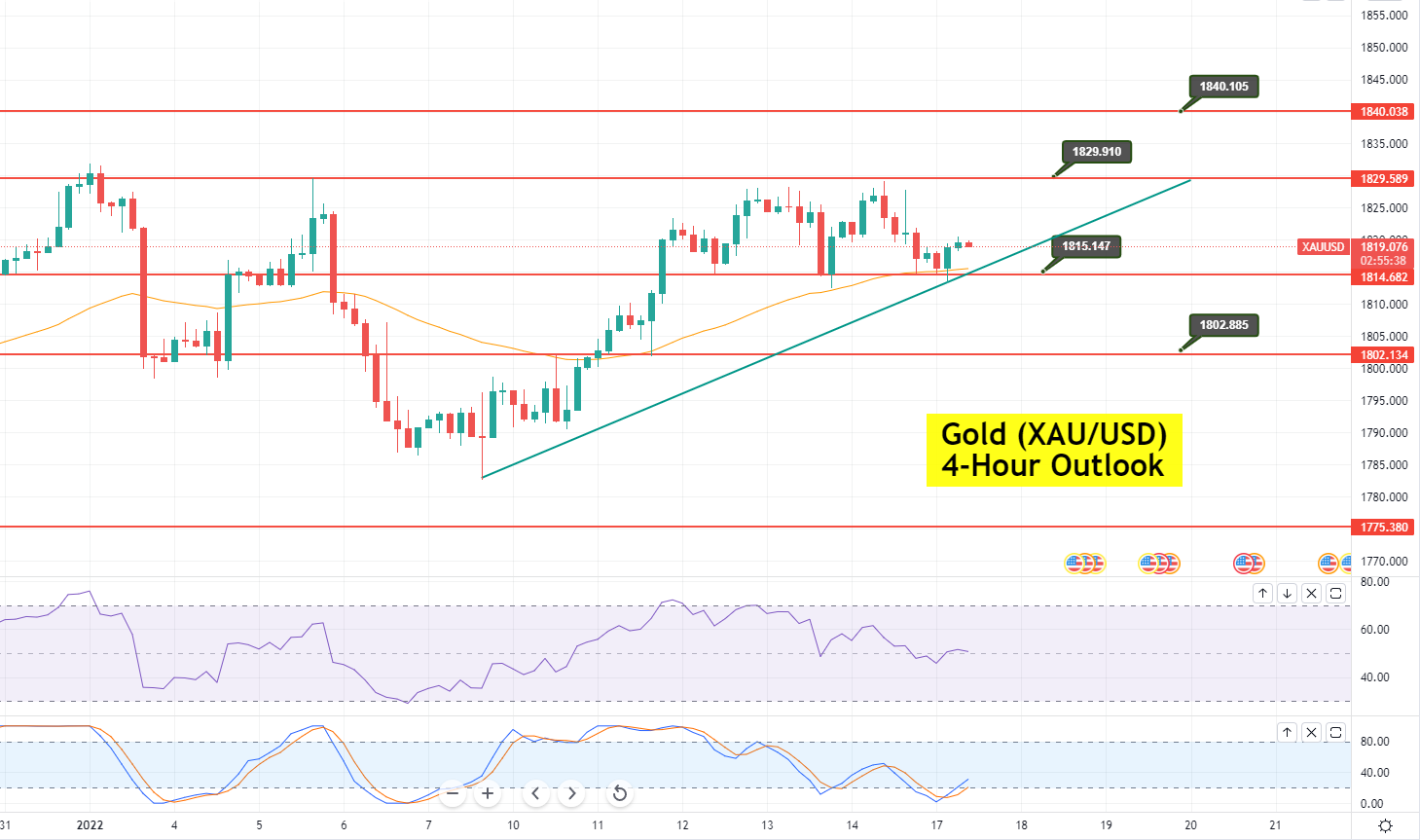