EUR/USD gains support at $1.1310 – Buckle up for an upswing trade - Forex News by FX Leaders

The EUR/USD closed at $1.1311, after setting a high of $1.1369, and a low of $1.1303. The EUR/USD pair resumed its bearish momentum and dropped again on Thursday, losing all of its gains of the previous day, mainly because of the rising value of the US dollar. The US Dollar Index was high on the board on Thursday, moving around 95.79, after recovering all of its losses of the previous session. As the date of the monetary policy meeting approaches, the dollar gains strength. At the upcoming policy meeting, which is scheduled for next week, the Fed is expected to provide a clear timeline related to its tightening of monetary policy and the interest rate hike. These expectations kept the price of the dollar higher on Thursday.
EUR/USD

On the data front, at 12:00 GMT, the German PPI came in, showing a massive surge to 5.0%, against the projected 0.8%. This supported the Euro and capitulated further losses in EUR/USD. At 15:00 GMT, the final CPI for the year came in. It remained flat, in line with the expectations of 5.0%. The final core CPI also remained unchanged at 2.6%. At 18:30 GMT, the Philadelphia Fed Manufacturing Index was released. It rose to 23.2, against the predicted 18.9, and supported the US dollar. The unemployment claims from last week also surged, coming in at 286K, against the projected 227K, weighing on the US dollar. At 20:00 GMT, the existing home sales figures were released. They  dropped to 6.18 million, compared to the projected 6.42 million, which weighed on the US dollar. Most of the data from the US side was negative, which also limited the declining prices of the EUR/USD currency pair.

Furthermore, the prevailing risk-off market sentiment, driven by the accelerated tensions between Ukraine and Russia, also added weight to the riskier EUR/USDcurrency pair. The White House has warned that Russia is planning an attack on Ukraine, as it has deployed troops on its borders with the country. European countries have also shown concerns about this matter. The potential threat of a war between Ukraine and Russia added to the risk-off market sentiment and drove the EUR/USD pair further to the downside.

On Thursday, ECB President Christine Lagarde rejected calls for the European Central Bank to increase interest rates more quickly than planned, amid record inflation. She said that the bank had every reason not to act as quickly or as ruthlessly as the US Federal Reserve. She warned that raising interest rates too soon would only put the brakes on growth, and it is not part of the plan of the ECB right now. These dovish comments by Lagarde quashed the expectations of a rate hike and added weight to the Euro, which ultimately dragged the EUR/USD further to the downside. 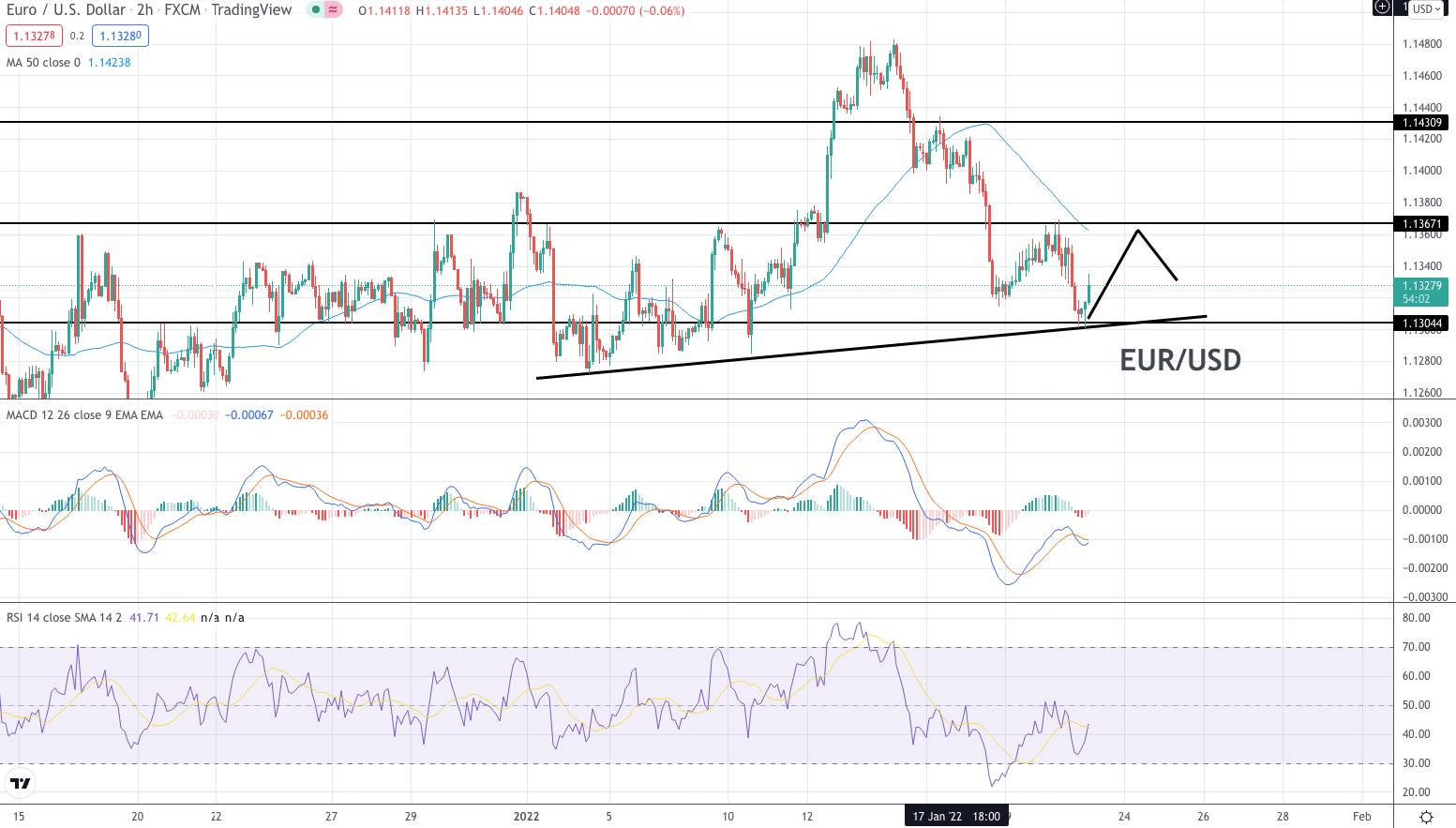 The EUR/USD is trading with a bullish bias, and gaining major support at the 1.1300 support level. On the bullish side, the currency pair is likely to find a major resistance at 1.1367, and a break above this level could open up a buying trend until 1.1430.

On the lower side, a breakout at the 1.1300 level could extend the selling trend until the next support levels of 1.1275 and 1.1245. The leading technical indicators, such as the RSI and the MACD, support a selling trend. Let’s consider taking buy trades over 1.1300 and vice versa. Good luck!