Gold Steady Near $1,865 – US Nonfarm in Focus This Week - Forex News by FX Leaders 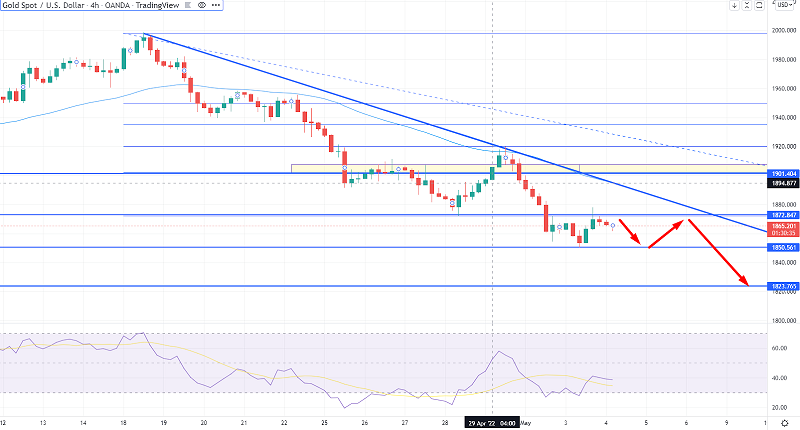 The gold price (XAU/USD) is hovering around $1,865.00 and is likely to remain volatile as the Federal Reserve (Fed) announces its monetary policy, which has paused the entire forex domain. The precious metal has shown a lackluster performance in the early Tokyo session and is expected to continue to do so until the interest rate decision is announced.

GOLD prices will face a lack of investor attention for an extended period of time as the Fed’s determination to return to neutral rates pushes it to raise interest rates sooner rather than later. An interest rate hike of 50 basis points (bps) is on the table, but given the Fed’s multi-decade high inflation and consistency in full employment levels and wage-price hikes, another jumbo rate hike appears imminent.

In the meantime, the US dollar index (DXY) is attempting to break through 103.50 in this session. Aside from the Fed’s policy, the DXY is anticipating the release of US Nonfarm Payrolls (NFP) on Friday. The US administration’s job creation in April is expected to total 400k, compared to the previous print of 431k. In addition, the unemployment rate is expected to fall to 3.5 percent, down from 3.6 percent previously.

Gold price managed to reach 1850.00 level this morning, indicating a temporary bullish bias, while waiting for a negative motive to assist in pushing the price to break the cited level and certify the resumption of the bearish bias to head towards our upcoming negative targets of 1820.00 and 1780.00.

In general, the bearish trend situation will remain in force and active unless 1890 is breached and held with a daily close above it. Today’s trading range is expected to be between 1840 support and 1880 resistance.