The main trend is still very bearish for GBP/USD

GBP/USD has been extremely bearish since late February declining from around 1.36 to 1.2150, but there’s a bit of a jump in cable today after the break above 1.2400, which offered some minor resistance as seen from the 9 and 11 May highs. After a push above that, it is a swift move towards 1.2480 before seeing a light pause now. If anything, the 1.2500 level stands to offer the next layer of resistance for buyers.

For now, they are back in near-term control after pushing above the key hourly moving averages in trading this week. The retracement higher is perhaps way overdue considering the unrelenting technical drop from 1.3200 to 1.2155-65 last week. I mentioned on 9 May that:

“We’re still some ways off that (support at 1.2000) but it’s getting harder by the day to chase further downside in the pair (mainly after an already sharp drop in April) unless the dollar continues to run hot across the board. While that is still largely plausible, we’ll have to go step by step on the technicals to confirm that.”

After a 1,000 pips move, it isn’t surprising to see a bit of a pullback – especially as the pound has been trading very much like a risk currency as of late. With risk sentiment rebounding strongly in the session now, it is helping to pin down the dollar and also give the quid a bit of a lift.

That said, I don’t see much in this besides being an argument for some breathing room after a sharp one-way move lower for cable. That is unless the market decides to abandon its bullishness for the dollar, which I would say isn’t quite the case yet. 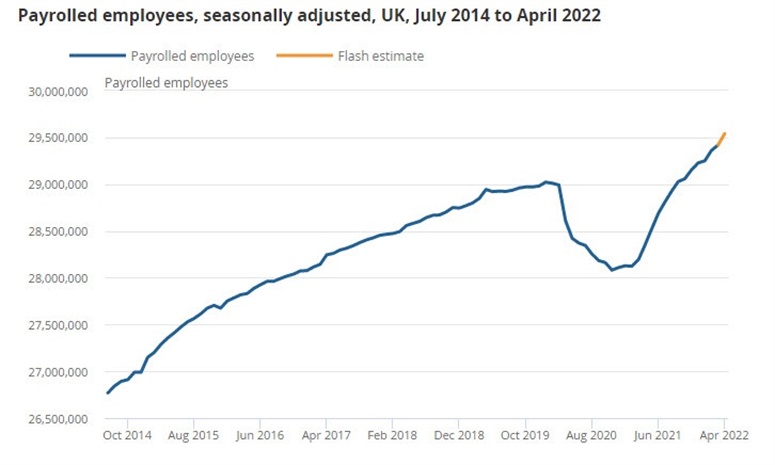 The UK employment rate increased by 0.1% to 75.7% but continues to sit below pre-pandemic levels still for the time being. The number of payrolled employees increased by 121,000 to a record 29.5 million. Meanwhile, the jobless rate drops further and for the first time ever, there are fewer unemployed people than job vacancies in the UK as the latter grows to a record 1,295,000 in the three months from February to April.