Is the Consumer Shifting From Manufactured Goods to Services? - Forex News by FX Leaders

Is the Consumer Shifting From Manufactured Goods to Services?

Services remain near record highs, despite the slight cool-off

Inflation has been increasing, which is hurting consumer confidence everywhere as well as profits for businesses and companies. Yesterday we saw the Eurozone and European consumer confidence for May remain at the same negative levels or worse which shows that the consumer is quite weary as prices keep increasing. 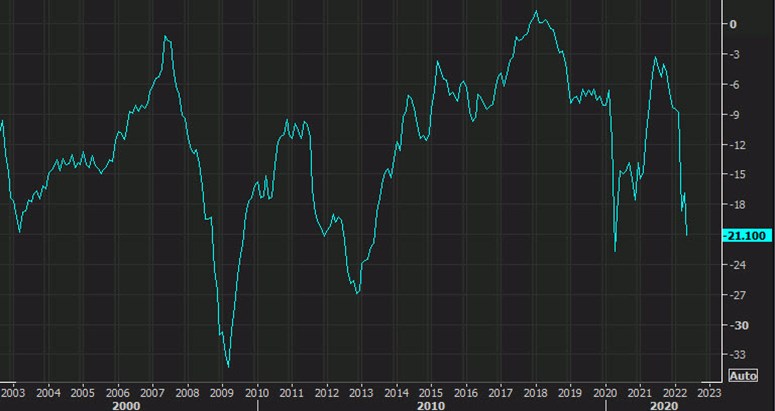 This isn’t as bad as the drop in UK consumer confidence earlier today (a 40-year low) but it’s not a nice picture.

The records for UK consumer confidence go back to 1974. May 2022 has hit the lowest since the records began, coming in at -40 points, which matched a record low hit in April 2020 as the coronavirus pandemic swept the country. Will this mean a recession for the Eurozone? China is heading toward one as manufacturing and services remain  in deep contraction due to lockdowns over there.

Target, Kohl’s and Wal-Mart earnings showed a major decline in April which sent their shares diving lower. This is a dire signal on inflation.

That sounds like a weak consumer, but is it? Note that Wal-Mart raised its sales estimate for the year in the earnings report. Granted, some of that is people paying more for the same things but that isn’t a big retrenchment. The other part of the earnings miss was a 32% rise in inventories, something they plan to work off.

How will they work that off? Some of it will be lower orders but some will also be discounting — that’s deflationary. Right now the market is looking at this as a sign of a weak consumer and a recession but what if we’re simply seeing a shift in spending to services?

“If people don’t buy as many goods and they begin to move out into more-normal patterns of consumption, maybe we don’t have to go as far to achieve some kind of equilibrium in the economy,” she said on CNBC.

Right now might be peak inflation because services inflation is ramping up while we haven’t yet priced in the shift away from goods. While there were certainly many who expected goods spending to remain high, a shift down on that front won’t necessarily be bad for the economy because it will naturally allow supply chains to heal and prices to normalize.

The takeaway may be that goods spending that would have taken place in 2022-23 was pulled forward during the pandemic. That will mean a step back down. So while it all looks ugly at the moment, there’s a silver lining on the retail cloud. This might be the economy simply healing itself.