Will We See Further Signs of Global Slowdown This Week Due to Inflation? - Forex News by FX Leaders

Will We See Further Signs of Global Slowdown This Week Due to Inflation?

Central banks sounded very confident in rejecting inflation until the second part of 2021, but it seems that they made a wrong estimation, as price growth accelerated beyond all expectations, driven by various factors, which together, pushed inflation to multi-decade or record highs, with no signs of peaking so far. Many economists think that surging inflation did not appear overnight, but it was a result of the longer-term process, pointing to an enormous printing of money that was pumped into economies during the pandemic slow-down, to keep them afloat and to maintain ultra-low interest rates.

This points to one of the definitions of inflation that strong expansion of the total amount which circulates in the economy leads to higher inflation. In addition, the conflict in Ukraine caused a chain reaction in lifting energy and commodity prices, following the decision of the Western world to reduce and eventually ban imports of crude oil, natural gas, coal and a number of other raw materials.

Threats that European Union’s economy, heavily dependent on the Russian energy, with already significantly slowed activity, may face catastrophic consequences if imports from Russia stop, triggered the domino effect that spilled over the western economies but also caused the global economic destabilization.

Significantly higher prices of energy and raw materials caused a rise in prices of final products that contributed to the second cause of rising inflation – cost-push inflation, while the strong rise in prices, accompanied by persisting supply disruptions, resulted in the shortage of products that pushed their prices higher and pointed to the third cause of strong prices growth – demand-pull inflation.

The uptrend has picked up pace since March

The enormous rise in prices of natural gas from around $3 a year ago to around $9.50 in March and currently standing at around $8.50, with expectations that gas prices could move higher in winter, poses a serious threat to the developed economies, such as European Union and the United Kingdom. At the same time, crude oil prices rose above $100 per barrel where it keeps trading, after dropping below the zero level during the pandemic, although the global supply is still stable and without disruptions.

This sparked a rise in food prices, electricity and many other essential items that contributed to the enormous increase in the cost of living, further pressuring the households and the businesses. Current inflation in the United States is 8.3%, just below the 40-year high at 8.5%, hit in March, raising hopes that inflation in the US may have peaked, however, the economists are not too much optimistic as so-called core inflation, closely watched by the US central bank and used as a gauge for the real inflation, rose last month, adding to expectations that the Fed may opt for a more aggressive approach in the next policy meeting in June.

The US central bank already raised interest rates twice, starting with 0.25% increase in March and 0.5% in May and signaled multiple rate hikes by 50 basis points in coming months, confirming their commitment to restoring the price stability, while President Biden also said that fighting high inflation will be his top domestic priority. 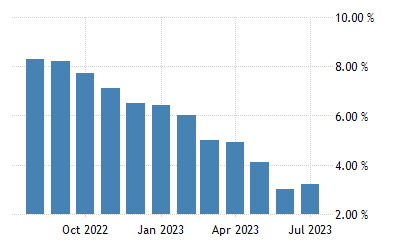 We’ll probably see another increase in May

Inflation in Great Britain rose to 9% in April, the highest in four decades, driven mainly by soaring energy prices. British inflation, currently the highest in Europe’s five largest economies, but also in the Group of Seven countries, further hurt the already high cost of living, which is in the deepest crisis since 1950’.

Soaring inflation put UK households and the economy under increased pressure, with current help from the government, being so far insufficient to significantly improve the situation. The outlook remains pessimistic, as the Bank of England forecasted the inflation to hit 10%, while economists see an increased risk of further rise in the current worsening geopolitical and economic situation.

The Bank of England (BoE) already raised rates four times since December, in the fastest rate raise in 25 years and brought its benchmark interest rate to 1%, the highest since 2009. The central bank aims to bring soaring inflation under control by strong tightening of its monetary policy. European union’s inflation hit a record high at 7.5% last month, lifted by surging energy and food prices, prompting the policymakers to act faster.

The European central bank said it will end its bond purchases likely in July and signaled it may start raising interest rates in the third quarter, as the ECB still keeps zero-rate, established during the pandemic crisis. Economists expect 3-4 hikes this year, hoping that policy tightening would bring raging inflation which is currently nearly four times above the central bank’s target, under control.

Worsened economic situation due to soaring inflation, poses a strong threat that many developed economies may slide into recession in the coming months, as most of central banks already downgraded their growth forecasts for the rest of 2022 and early 2023. After emerging from the deep crisis caused by the coronavirus pandemic, the global economy faces new disastrous scenarios with soaring inflation.

After the inflation was anemic for some years, despite numerous attempts of central banks to revive it and push from the zone well below targets, the price growth suddenly exploded in the past few months. Initial inflation rise was described by the US Federal Reserve and other major world central banks as transitory and seen as a temporary phenomenon, primarily caused by the fast growth of the economies in the post-pandemic, which was expected to peak in early 2022 and subsequently start easing.

These comments are all hawkish and with inflation running at 8%, you can see why. There’s a growing belief that rate hikes are needed to curb inflation in order to promote sustainable expansion.

Check out our free forex signals
Follow the top economic events on FX Leaders economic calendar
Trade better, discover more Forex Trading Strategies
Related Articles
Selling EUR/GBP Below the 20 SMA, Ahead of the BOE Meeting
EUR/GBP has been quite bearish recently, as the BOE has already has hiked interest rates many time and we decided to sell this pair again
1 week ago