Gold Retesting the Downside of the Range, After Buyers Failed at Resistance - Forex News by FX Leaders

Gold Retesting the Downside of the Range, After Buyers Failed at Resistance

Gold continues to lose its shine

The strength of the consumer is a big factor the Federal Reserve is grappling with today and something that markets grapple with every day. Wal-Mart this week sent a shiver through global equities after warning that goods excluding food were slowing down and that it would have to discount merchandise. The largest trove of spending data in the world belongs to Visa and they reported earnings yesterday. Shares are down 0.2% but more important is what they had to say about overall spending.

That has hurt the sentiment for Gold, which is performing as a risk asset now, instead of a safe haven. Buyers failed continuously to push the price above the 100 SMA (green) on the H4 chart, but the 50 SMA (yellow) has been acting as support. Although buyers are back at it now, retesting it but I’m reluctant to think that they will push below it before the FED.

The 50 SMA continues to hold as support 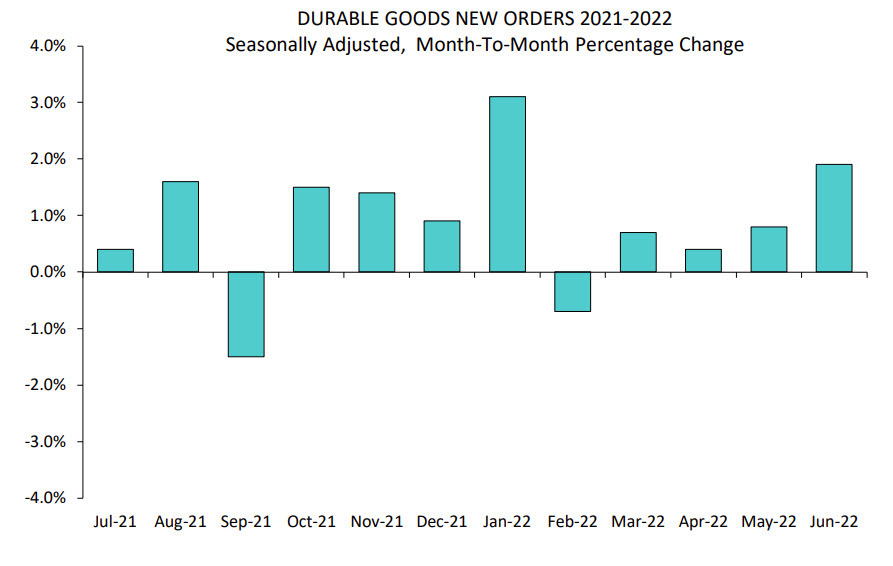 Durable goods orders have risen in 8 of the prior 9 months and this is a solid surprise. There are plenty of people screaming that the economy has been in a terrible contraction this year but this report — even in embattled manufacturing — shows that demand to rebuild inventories is strong.

-We’re not economic forecasters, so I’m not going to predict the future or a potential likelihood of a recession. Instead, let’s focus on the facts. From the numbers I just reviewed relative to 2019 levels, growth has been stable or improving in overall domestic payment volume, credit, debit, card-present and card-not-present volumes. And this has been the case for most of 2022 with no indication of any slowdown, including in more recent weeks.

-Many discretionary segments have further strengthened. If you look at U.S. travel spend, it is now back — it is not back to the pre-COVID trend line, but grew more than 40% versus last year. Third, the affluent spender continued to recover, particularly in the areas of restaurants, travel and entertainment. At the same time, nonaffluent spend remained relatively resilient. We mentioned the affluent spend returning to restaurants last quarter. That trend continued this quarter with affluent restaurant spend indexing in the 160% to 180% range versus 2019.

-in Europe in the last 6 months, luxury hotel payments volume and average ticket size outpaced growth in the overall hotel category versus 2019. At the same time, budget and mid-priced hotels saw modest improvements. Based on our numbers, we haven’t seen any evidence of consumer pulling back spending in our markets.

-U.S. transaction growth relative to 2019 is strong and stable. Ticket sizes remain around 15 points above 2019 levels, as they had for much of the pandemic due to several factors.

–What we don’t know are what level of substitutions are taking place, where people might be buying more staples and less discretionary items but they’re spending at the same level they did, or whether as some retailers have said, people are trading down from brands to private labels. But it’s also difficult for us to understand consumption reduction. So for example, consumers could be buying less fuel, but spending at the same amount or buying smaller package sizes of things like snacks and yet spending the same amount.

–If anything, affluent spending has been on the rise and is one of the reasons why we’ve seen some of the robust growth we saw this quarter. Remember, we’re lapping a very significant growth quarter last year that included sizable stimulus payments. And despite that, we had some very good growth this quarter. And a lot of that is driven by affluent consumers, by discretionary spending coming back and no evidence of a wealth effect that people are holding back.

-Moving now to our outlook for the fourth quarter. As Al indicated, we’re seeing no evidence of a pullback in consumer spending. U.S. payments volumes have indexed in the mid-140 range versus 2019 since January through July 21. Excluding Russia and China, international payments volumes have also indexed about 140 since January. Processed transactions have been stable at around 140 versus 2019. As such, we are assuming that the trends we have seen in payments volumes and processed transactions will continue through the fourth quarter. We will, of course, stay vigilant and on the lookout for any changes caused by rising interest rates, high inflation and declining consumer confidence.

-[On travel] In terms of where the strength is, clearly, the recovery in Asia has been quite strong. You saw how much it improved this quarter, almost 20 points, if I remember right. And it is continuing. It’s happening all across Asia, except for places like China, and they’re still — it’s not that easy to get in and out of Japan and Taiwan. But elsewhere, it’s very strong across Asia. There’s a huge amount of interest in traveling to Europe and significant interest in European traveling out of Europe. So Europe has been also recovering very fast and is indexing at pretty high levels relative to pre-COVID volumes.

-The other area that continues to surprise [on travel] is Latin America. We told you that it was always quite high because Latin America stayed fairly open. But in the last quarter, it jumped another 20 points and is indexing in the 150 range for people traveling into Latin America. So as you look across it, this looks pretty durable. There’s still recovery left to come, as you can see. Asia still was indexing well below ’19 levels. The U.S. is still below ’19 levels. So we don’t think this ends anytime soon.