After registering the largest monthly increases in 29 months in November, GOLD prices begin December on a firmer footing, around $1,768. Nonetheless, the yellow metal’s recent rally could be attributed to dovish remarks from Federal Reserve (Fed) Chairman Jerome Powell and confidence surrounding China. Buyers appear to be taking a hiatus ahead of the Fed’s favorite inflation barometer, the October United States Core Personal Consumption Expenditure (PCE) Price Index.
Fed Chair Jerome Powell made his first public appearance since the November FOMC meeting on Wednesday, addressing the Brookings Institute about the economic outlook, inflation, and employment. The policymaker noted that it makes sense to lower interest rate increases, implying that the moment to pause the rate hikes could come as soon as the December meeting.Before him, Federal Reserve member of the Board of Governors Lisa D. Cook spoke and applauded the inflation numbers, signaling that the Fed will likely take fewer steps in the future.

Following Powell’s speech, the market upped its bets on the Federal Reserve, raising interest rates by 50 basis points (bps) in December from 69.9% before the speech to above 75%.

With this, the US Dollar Index (DXY) ended a three-day rally while exhibiting the worst daily loss in a week, not to mention the largest monthly fall in 12 years. It’s worth noting that Wall Street benchmarks praised the Fed Chair’s dovish statements, but US 10-year Treasury bond yields reversed early gains to conclude November on a negative footing, around 3.61%.

Given the inverse link between the US Dollar and GOLD , the metal benefited from a drop in the Greenback by clearing a major technical barrier and drawing purchasers.

Among these, the US ADP Employment Change received significant attention because it recorded the lowest readings since January 2021, with a 127K figure for November vs. a 200K expectation and 239K previous readings. Similarly, the US JOLTS Job Openings for October fell to 10.334M, down from 10.3M projected and 10.687M. On the other hand, the second estimate of the US Gross Domestic Product (GDP) Annualized for the third quarter (Q3) showed a 2.9% increase versus 2.6% early predictions. 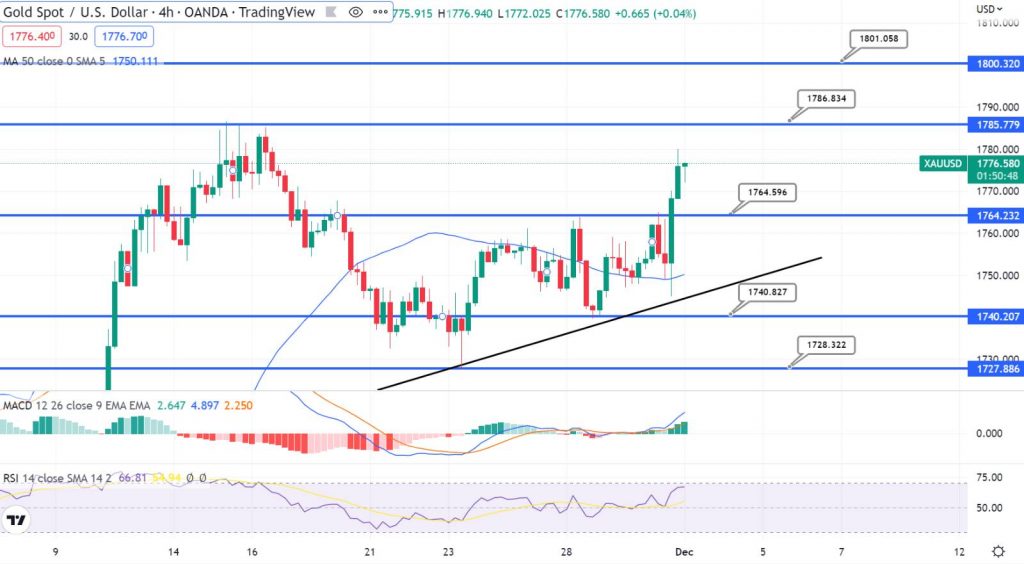 The GOLD price is trading with clear positivity as it approaches our first anticipated target of $1,765. We recommend breaking this level to open the way to further gains that reach $1,786.50, to keep the bullish trend scenario active for today unless it breaks $1,746.40 and holds below it.
Today’s trading range is likely between $1,740 support and $1,775 resistance.
Today’s projected trend: Bullish
Check out our free forex signals
Follow the top economic events on FX Leaders economic calendar
Trade better, discover more Forex Trading Strategies
Related Articles

Gold Price Forecast: Will XAU/USD Break $1,900 After US NFP With Fed Rate Pause Rum
8 hours ago