Bitcoin Cash BCH was launched at a great time, right before the surge in Q4 of 2017. It started life at $ 300, and ended up at $ 4,147 by December that year. But, the decline was also pretty ferocious in the next year, and at some points, [[Bitcoin]] Cash ended up below $ 50, as the attacks from the Bitcoin community, due to the split, hurt its reputation. This has kept investors wary of BCH, which is one of the reasons why this cryptocurrency has remained behind other major cryptocurrencies, despite it being among the top ones in terms of market capitalization.

Read the latest Update at the Bitcoin Cash Price 2021 Forecast

The price has returned to the opening price, trading at around $ 300 since May 2019, but it missed out big time on the surge in the second half of 2020. Moving averages are keeping this altcoin subdued as well, which is not a good sign, but let’s hope it will find the will to push above them and join the bullish run that we have seen in the crypto market during most of 2020.

The sentiment is a major factor for the cryptocurrency market, which has been quite positive this year, and BCH is also prone to the sentiment. The scalability is attractive for users, since it makes small transactions cheaper, which was the main reason why Bitcoin Cash diverged from Bitcoin in 2017. The competition with Bitcoin is also a major factor for BTC, with transaction fees dropping for Bitcoin, while BCH plans to increase the block size to allow for faster transactions, whilst also lowering fees. The adaptation of BCH by large institutions or investors will be another factor that will impact the price of Bitcoin Cash, such as the entrance of Paypal into the game in September 2020.

Bitcoin Cash Price Prediction for the Next 5 Years

Bitcoin Cash started its life in immediate competition with Bitcoin, since it was a hard fork of the latter. Bitcoin had a scalability problem, and decided to develop the Segregated Witness for the transactions SegWit2x, but a number of Bitcoin holders didn’t think that this would solve the transaction time problem, so they decided to fork off and create Bitcoin Cash. They increased the block size from 1 MB to 8 MB and promised to adhere to Satoshi Nakamoto’s whitepaper goal.

This makes BTC a direct competitor of Bitcoin. So, a main element in Bitcoin Cash’s potential for success will be whether users decide that directly increasing the block-size is more effective than SegWit. The transaction speed is faster for BCH, at 11.000 transactions per second TPS, and it will increase further, as Bitcoin Cash aims to increase the block size to 32 MB.

However, the competition with Bitcoin has led to attacks on Bitcoin Cash, hurting its reputation, which has been one of the main factors for BCH not benefiting from the recent surge in major cryptocurrencies in the second half of 2017. But, this hasn’t stopped the support from large investors like Paypal, which adopted BCH together with three other major cryptos in September 2020. But once again, BCH didn’t benefit from that news. The crypto market has also benefited greatly in 2020 from the new safe haven status, but once again Bitcoin Cash hasn’t taken advantage of that.

Bitcoin Cash Technical Analysis – Will MAs Keep the BCH/USD Subdued, or Will it Break Above Them Soon? 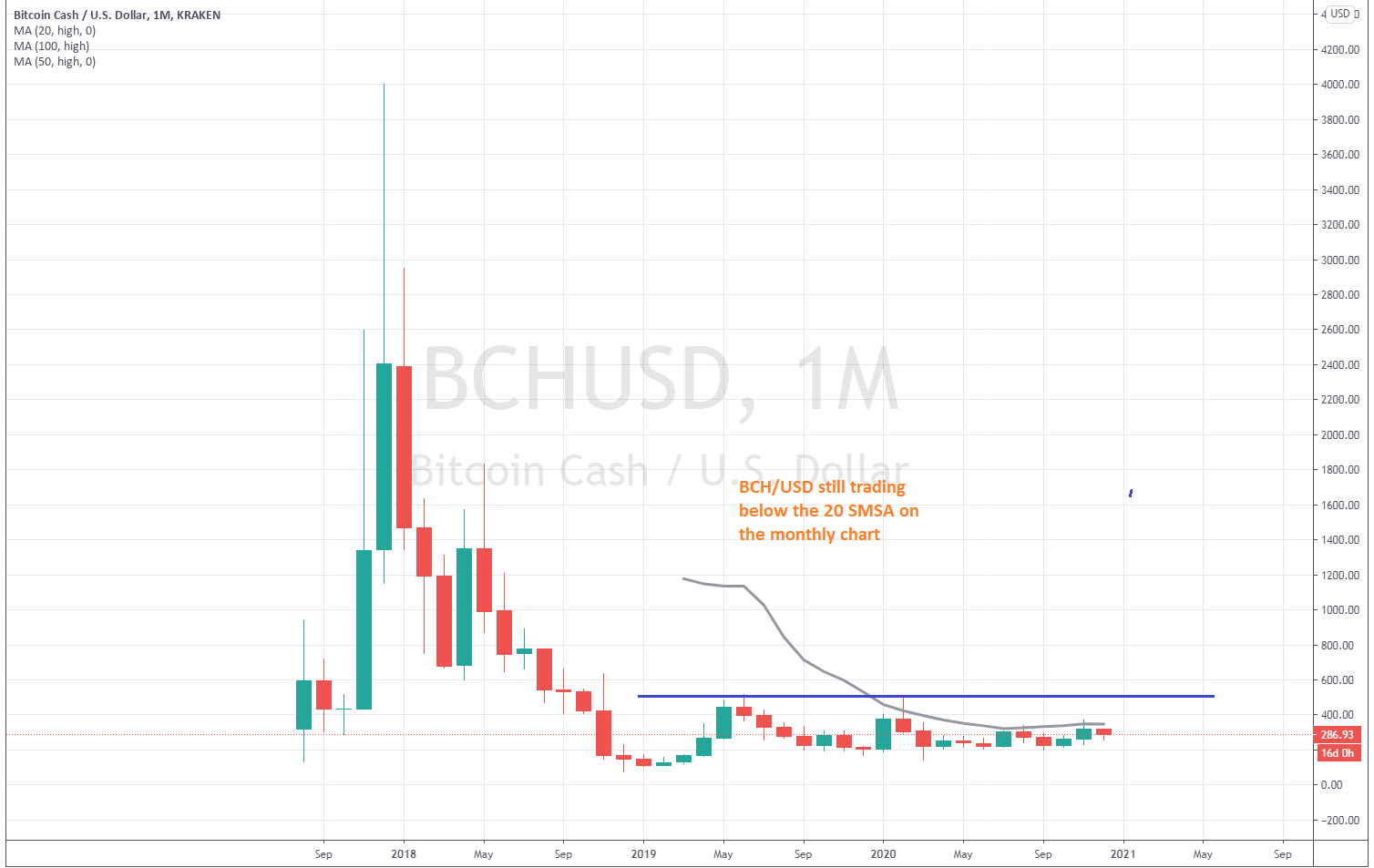 BCH/USD is trying too hard to break MAs recently

As mentioned above, Bitcoin Cash came at a great time, just before the big surge began for cryptocurrencies at the end of 2017. It surged from $ 300, where it began, to $ 4,147 by December that year, but it came down hard in the beginning of 2018. After a short-lived try to reverse the price in April/May 2018, the price fell to $ 75 by the end of 2018. In 2019 we saw a bounce, but the climb stopped around the $ 500 level, which held for the second time in February this year. Eventually the 20 SMA (green) also caught up with the price on the monthly chart, and it has been providing resistance for the BCH/USD since then, and keeping it down. 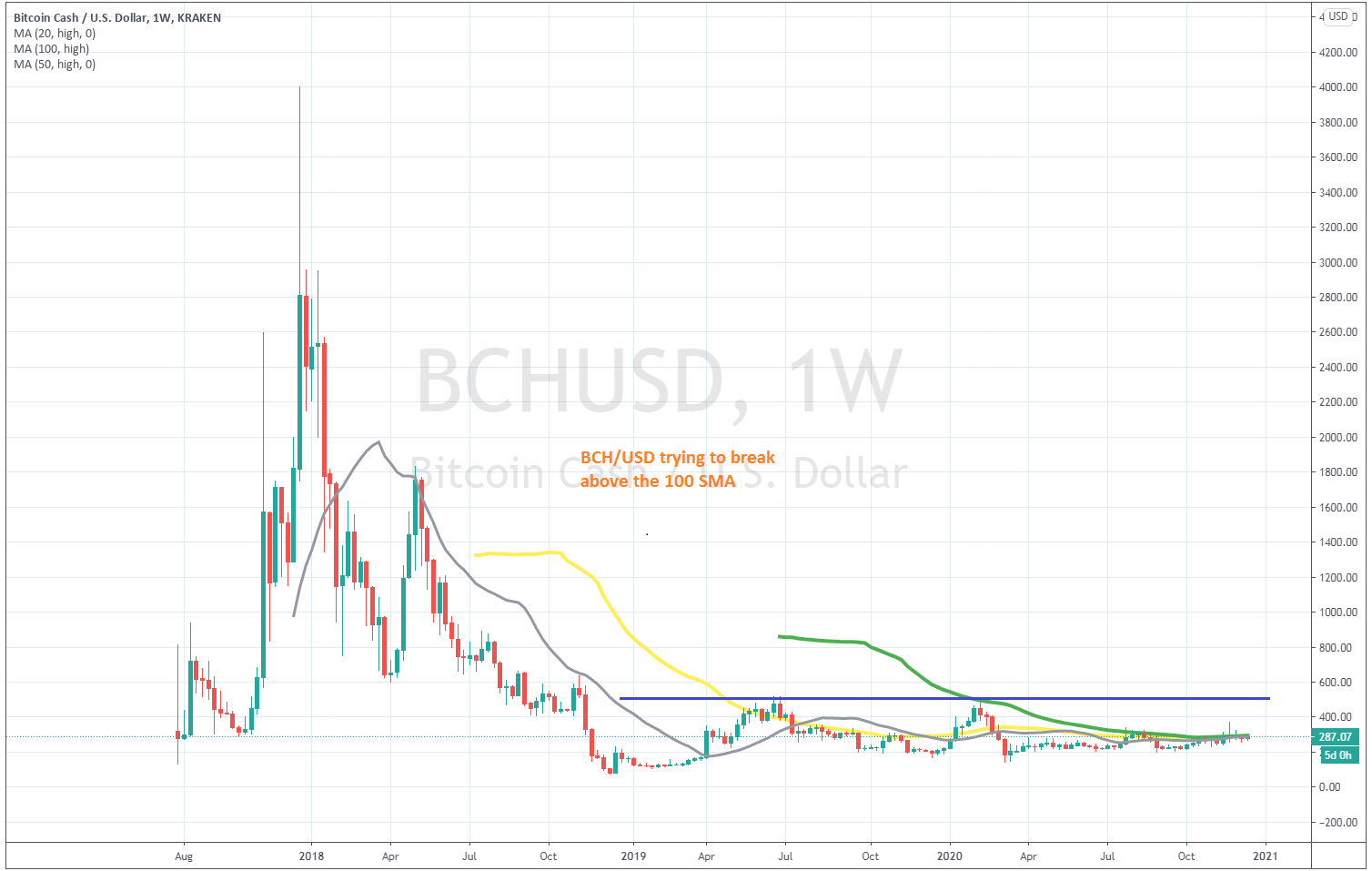 On the weekly chart, we see that the 20 SMA turned into resistance for Bitcoin Cash in spring 2018, after trying to reverse higher, and it continued to push the price down until April 2019 when the price jumped above it. The 50 SMA (yellow) was pushing the price during most of 2019, while the 100 SMA (green) took its turn in 2020, and it is still pushing retraces lower. So, the technical analysis doesn’t paint a bright picture for the BCH/USD, but if the price breaks above it soon, since it has been sticking to the 100 SMA recently, we might see a breakout.