Australian Dollar Price Forecast for H2 of 2020: The Long-term Downtrend Likely to Resume Soon for the AUD/USD

Australia is a major producer/exporter of raw materials, thus making Australian Dollar a commodity currency. As such, it is very vulnerable to the movement in commodity prices, which in turn are correlated to the sentiment in financial markets, which also means that the AUD is positively correlated to the sentiment. The sentiment has been positive for this currency, while the USD has turned quite bearish in recent months, as a result of the coronavirus and the political scene in the US. The economic rebound from the COVID-19 crash has also been helping AUD/USD to surge higher, as commodities and raw materials have also rebounded. But, the rebound is slowing and the risk sentiment is wearing off, which has made buyers think twice before making any new highs in recent weeks, so the climb might be coming to an end for this pair. The technical analysis also points to a bearish reversal on the monthly chart, as do the fundamentals, as we will explain below in this medium-term forecast for the AUD/USD, but there are also other factors which we will take into consideration here.

Since the mid 1990s, the AUD/USD has been little changed, compared to the volatility we have seen during the last two decades, meaning that this pair has moved up and down, ending up roughly where it was 25 years ago. However, in the last decade, this pair was on a steady bearish trend, mainly as a result of the strengthening US Dollar. At some point, the price in the AUD/USD fell to 0.55 in March 2020, as the Australian Dollar received a double kick down the line, while the USD surged higher, as traders panicked due to the coronavirus and the lockdowns. But, the crash ended and the AUD/USD has been bullish since then, as the sentiment improved after the grand reopening of the world. The comeback was further boosted by the Chinese economic data, which indicates that China has left the coronavirus contraction behind and is almost back on track now. Yet, these have been some very strange times, which are not expected to last too long – until after US elections I assume – so things will eventually get back to normal and the decline in certain commodities will catch up with the AUD, and as a result, the climb of the recent months should be almost over and buyers must be careful from these levels, because the highs will be very limited from now on.

The Australian Dollar Price Prediction for the Next 5 Years

In this article, we have taken a look at the Australian Dollar, both from a fundamental and a technical point of view, and compared it to the US Dollar, to see which one will have the upper hand for the coming months/years. As mentioned above, this pair has been on a bearish trend for a decade, but the sentiment has changed since March, although we are going through some world-changing times at the moment, so the price action since March shouldn’t necessarily be taken into account too much, especially in the long term. But we can use it to predict the future of the AUD/USD in the coming months, after the price action of the last several months; however the coronavirus situation is not something that is likely to repeat itself.

Since Australia is a major exporter of raw materials and minerals, the AUD is closely correlated to these commodities, and consequently to the risk sentiment in financial markets. When the sentiment is positive, the AUD moves higher, as was the case during May and June, as the economies of the world were reopening and the economic data was showing a strong rebound from the crash of March-April. The AUD/USD surged more than 12 cents from the bottom, at 0.55, back on March 19, although the bullish reversal of March and April was an attribute of the US Dollar, which turned really bearish, after the surge in the first half of March, but we will take a look into that below. In the first few months of the big reversal, the AUD/USD surged more than 11 cents higher, to 0.7180, but since then, the pace has declined considerably, and since late July, this pair has gained less than 1 cent, which shows that the positive sentiment of the first months after the reopening is turning weaker, as the economic data is showing a slower rebound. Besides the global sentiment, which is weakening, as can be seen from the consumer and investor confidence after the latest reports, the sentiment regarding the Australian economy is also turning negative, as the state of Victoria continues to keep coronavirus restrictions in place. Economists are predicting a contraction of more than 6% for 2020, which is dampening the sentiment further. So, if the overall sentiment turns negative, the AUD will turn bearish, since the sentiment in Australia is also turning negative, compared to other regions of the world. Nonetheless, in the long term, traders should keep an eye on the market sentiment at all times when trading this pair, because it might ruin an account if you get caught on the wrong side, even if you are following the overall trend.

The global risk sentiment is a major player in commodity currencies like the Aussie, but fundamentals also play a big part in the currency, and they also affect the sentiment. The sentiment turned positive as fundamentals were showing a strong recovery during May, June and July, with employment bouncing back up again, and services and manufacturing surging higher. But, with the new restrictions in Victoria, Australian services dived into contraction again, from 58.1 points in July to 48.1 in August. That didn’t have much impact on the AUD, apart from a short-lived decline in the AUD/USD, but if other sectors fall into contraction again, they will start weighing on the AUD, sending this pair lower. The deteriorating sentiment and the contracting economy will make for a toxic combination for the AUD/USD, especially if the restrictions and lockdowns continue, so most things are related to the coronavirus right now, and the fundamentals will be dependent on how the coronavirus evolves in Australia and the rest of the world. But, we should also keep an eye on the increasing trade surplus in Australia, which has been increasing since 2015-16, when the trade balance was at around -$ 3.5 billion. The last four years in particular have been really positive, with the trade  surplus jumping above $8 billion. That’s one thing to keep in mind for the long term, not that it has helped the AUD too much. Both the Reserve bank of Australia (RBA) and the FED have their interest rates at 0.25%, after cutting them a few times in March. The recent rate decisions have been a result of the coronavirus, so there’s not much difference between the two central banks. But, if the restrictions continue in certain parts of Australia, the RBA will be leaning more towards the dovish side, but as we said, differences will be minor in the short term, when it comes to deciding the direction of the AUD/USD. 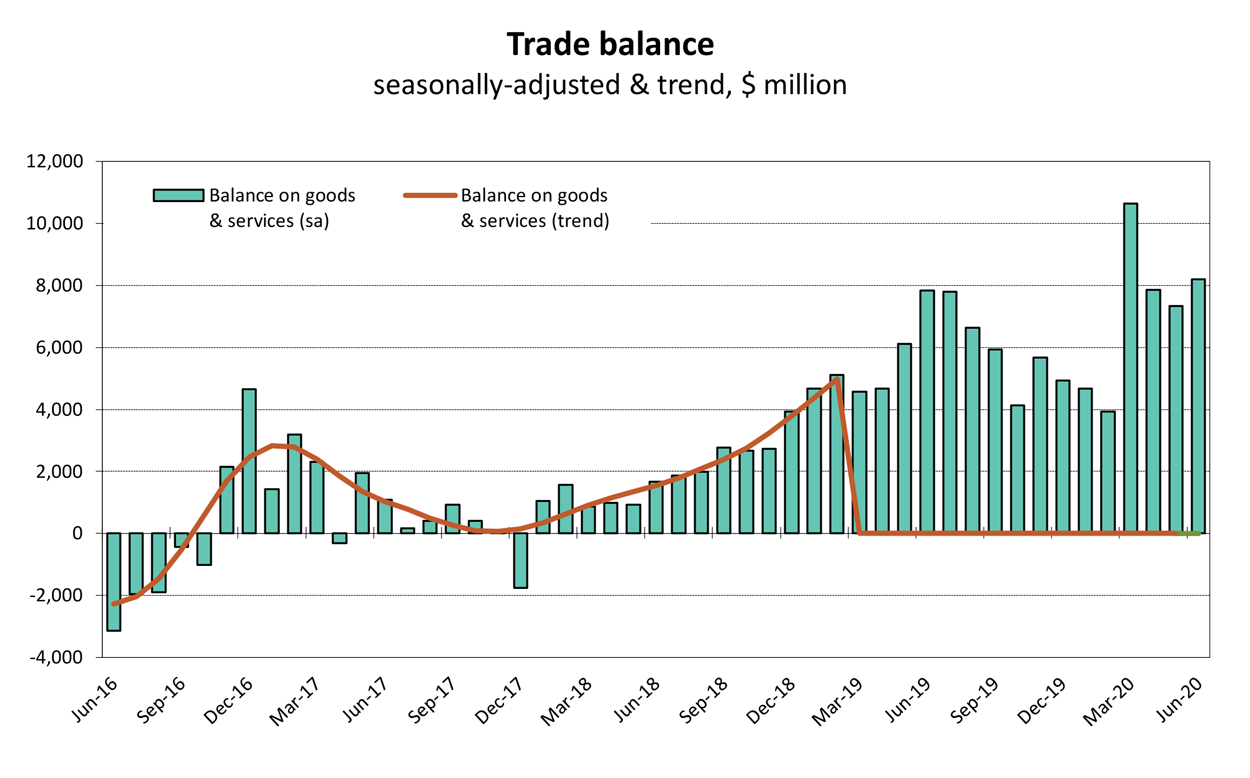 As shown from the monthly chart, the Australian Dollar index, or AXY, looks very similar to the AUD/USD index. The AXY was climbing during the 2000s, apart from the big crash in 2008. But, the trend reversed for the AXY in 2011, which has been on a bearish trend since then. The same scenario can be seen on the AUD/USD monthly chart below, in the technical analysis section. During the first five years, until 2016, the decline was stronger and the 20-monthly SMA (gray) was providing resistance for the AXY. Then the trend slowed, and the 50 SMA took its turn, which will provide official resistance until it is broken. The price is right below the 50 SMA now, but there’s still room upwards for half a point. 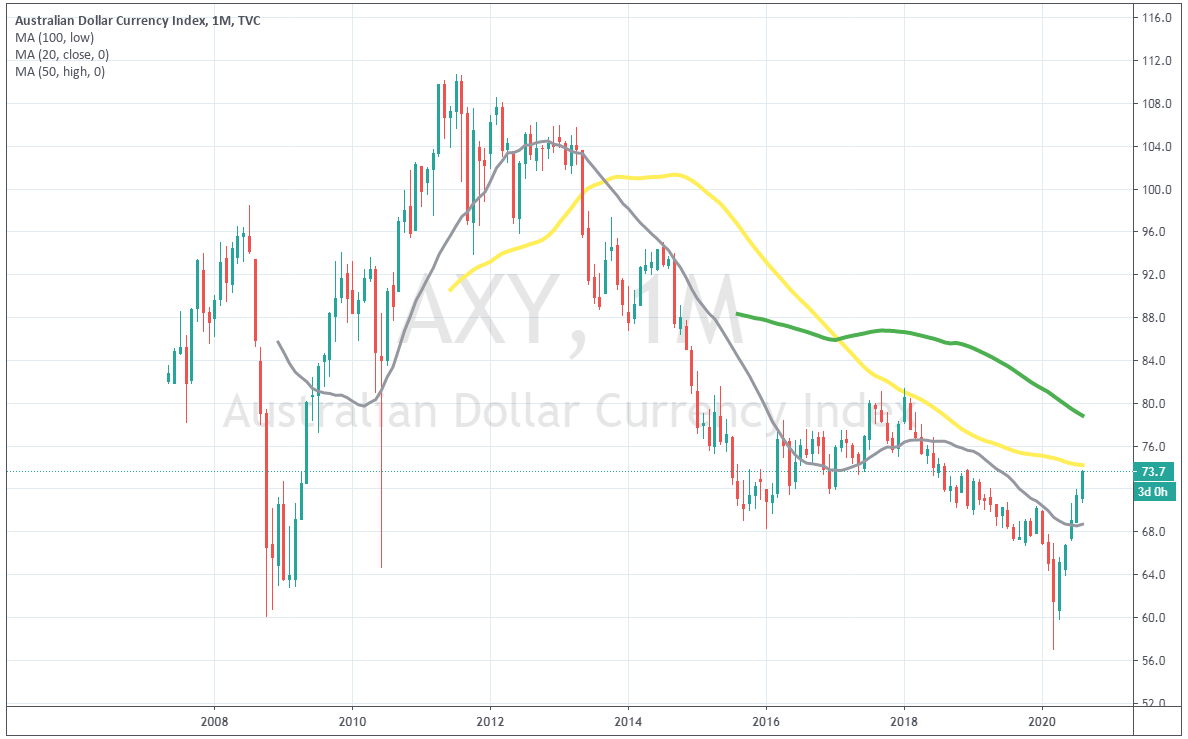 The AXY is still bearish, as long as it remains below the 50 SMA

The USD index, on the other hand, was bearish during the 2000s, but it turned bullish in 2014, after some consolidation for several years. The uptrend didn’t last long though – only about two years – and since 2016, the DXY has been trading within a range, as the monthly chart below shows. But, the highs have been getting higher and the 100 SMA (green) is providing support. The DXY is trying to break below this moving average, but right now, it is not certain if it will succeed. Still, the AUD index chart looks a lot more closely correlated to the AUD/USD, and they are both facing the 50 monthly SMA now. The 50 SMA has been defining the trend for both of them, so they are officially bearish until the price moves above the 50 SMA and stays there. So, in order to be more accurate when trading the AUD/USD, we should follow the AXY index. 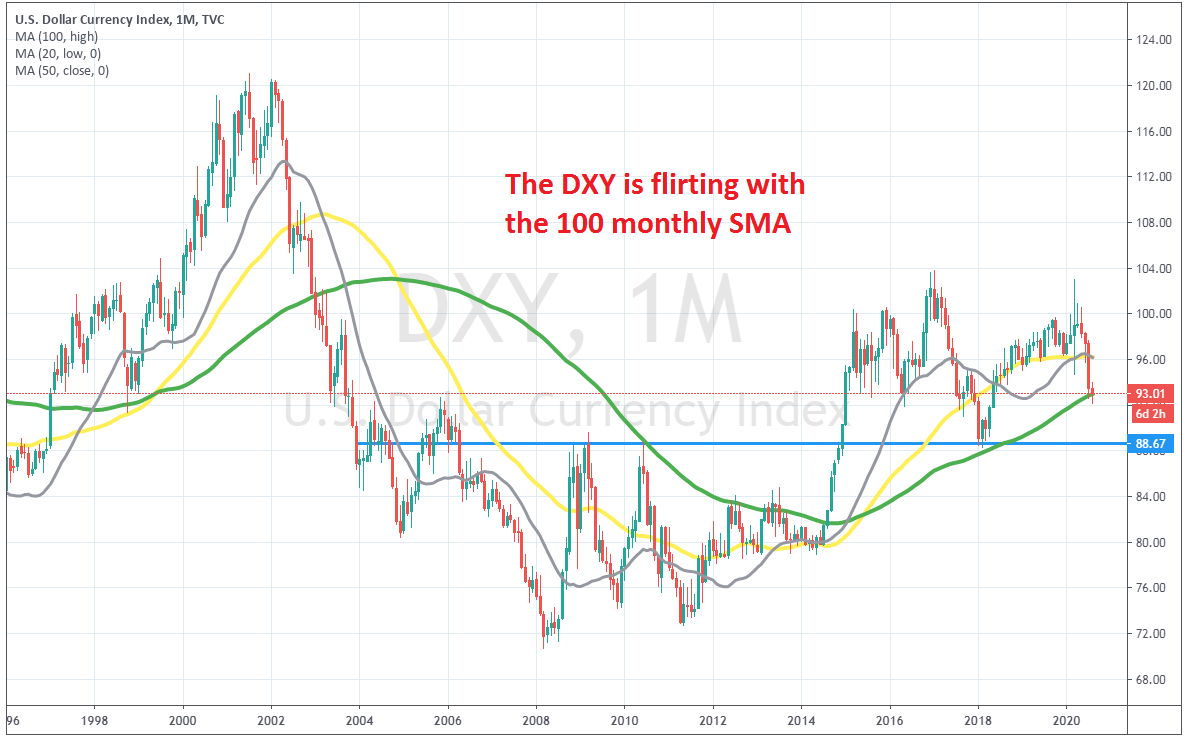 The pullback in the DXY seems complete on the monthly chart

Technical Analysis – Will the Recent Surge End at the 50 SMA for the AUD/USD?

The AUD/USD was declining towards the end of 1990s, but it then started following commodities. Then, the trend reversed as the new millennium began, and this pair remained bearish until 2011, and it has been bullish since then, trailing the decline in major commodities like oil, gas, copper etc. During the 2008 global crisis, the AUD/USD also followed commodities, as they crashed lower. The AUD/USD crashed 40 cents lower in just a few months, losing nearly 40% of its value as it reversed below $ 1 before the crisis. But, the crash ended and the uptrend resumed, with the AUD/USD making new highs above 1.10. During the uptrend, the 50 SMA (yellow) was pushing the price higher, as it was providing support on the monthly chart throughout that decade, with occasional help from the 20 SMA (gray). But, as commodities turned bearish, at the beginning of the new decade, the AUD/USD also turned bearish, where it remained until the beginning of the new one. 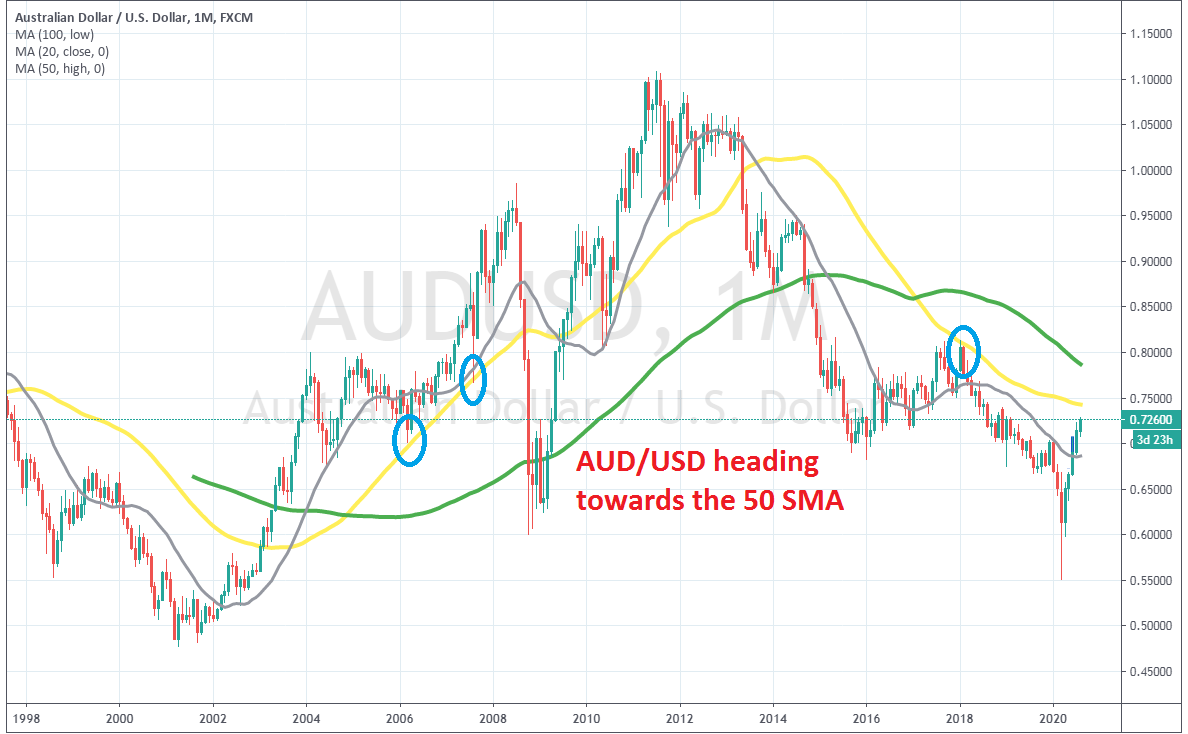 Could this be the beginning of a new bullish decade for the AUD/USD? I don’t think so, unless some new development brings back the demand for some raw material/metal/mineral that is found only in Australia. The increase in the trade balance has not been helping the AUD in the last 4-5 years either. So, I don’t think that we will see another bullish decade like the 2000s. There is more likely to be a retrace higher, which is underway and is likely to end soon. The 50 moving average provided resistance in early 2018, after the 2-year retrace higher, ending it and reversing the price back downwards. So, it seems like the 50-monthly SMA has turned from support into resistance on this time-frame chart, but that will only be proven after another test, which will probably happen soon. If the buyers fail to break above it for the second time in a few years, then that will be the confirmation we will need to go short on this pair in the long term. Until then, long-term traders will have to wait.