The US Dollar decline finally came to an end. The greenback closed the week around the opening price against most major currencies. In fact, the Australian and New Zealand Dollars closed the week lower against the Buck. The fight between the USD bulls and bears has been constant and the price has ping-ponged in a tight range. The exception this week was the Japanese Yen. This buying resumed again this week and USD/JPY fell 400 pips. Other Yen crosses suffered even bigger losses. 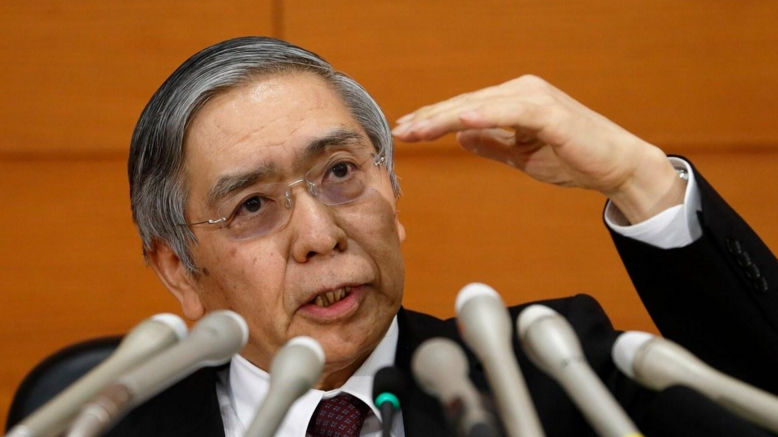 Will the Bank of Japan be forced to intervene?

Apart from the Yen, which was powerful again like the first half of February, the rest of the pairs have been pretty – quiet and bouncing in relatively tight ranges. So, the numbers of signals that we issued this week was a bit low. We issued 16 forex signals – four of which remain open. The other two open signals are from the previous weeks. On Monday, we opened two forex signals, one of them hitting stop loss while the other one hitting take profit. Tuesday we had three forex signals, two short-term signals and one that closed manually. This was the long-term EUR/USD forex signal which gave us a profit of 44 pips. On Wednesday, we had four forex signals and three of these closed in profit. Thursday was a bad day for us; we got caught by the 60 pip spike in EUR/USD on one short-term forex signal, and we finally threw in the towel at the USD/JPY buy long-term signal. We opened that signal after the first week of January when USD/JPY declined 500 pips. With this pair being in a strong long-term uptrend, we thought that the 115 support level would hold and the price would reverse back up. But we know what happened in February, and this week when the Yen appreciation was waning we decided to close that signal for a 680 pip loss and minimize risk. Without that signal, we would have made around 40 pips, but you cannot win them all and we know that this business has it´s rainy days. The win/loss ratio for this week was 67:33.

The US Dollar has been hit really hard during last few weeks. In fact, the market sentiment was negative towards the Buck during the entire month of March. And we started this week off with the same sentiment. But it turned out to be a relatively quiet week apart from the Yen pairs. The price has been pacing up and down in EUR/USD between 1.1430 and 1.1330. It briefly broke both these levels in two occasions, but the price dutifully returned inside the range again. There was a fierce battle between the bulls and bears and at the end of the week neither party had enough armour to set the tone. The Japanese Yen, on the other hand, enjoyed some really good demand. USD/JPY declined about 400 pips this week from its high, while GBP/JPY lost 800 pips. This turned the market into one of those Yen buying weeks that we saw in early February. There´s no real reason for this because, fundamentally, Japan is nowhere in an economic point of view. Technically, this doesn´t make any sense either because the Yen is overbought against all currencies, even in the larger time frames. I guess, when the ball starts running it can snowball. So, the yen’s strength was the technical highlight of the week, while the fundamental highlight was the FOMC minutes release. Last month, the FED turned dovish suddenly – so the market was waiting to see the minutes of that meeting in order to see if everyone in the board was as dovish as Yellen. There were indeed a couple of positive comments in the minutes made by some FED members but nothing particularly hawkish, and the US Dollar bulls hasn’t been given notice to take charge.

The building sector in Australia continues to be in a healthy shape as the 3.1% increase in the monthly building approvals showed on Monday morning. Later that day, we had other positive economic data coming from Spain when the unemployment numbers posted a 58k decline. On Tuesday, the RBA kept the interest rates unchanged in Australia but the statement leaned a bit on the dovish side. The individual and total services numbers of European countries missed expectations but the US ISM non-manufacturing PMI came out above expectations. The Chinese Caixin services PMI also beat the expectations on Wednesday morning, but that day was all about FED FOMC minutes. The minutes showed that the majority of FED members were as dovish as Yellen, apart from a couple instances. On Thursday, the BOJ´s Kuroda and the ECB´s Draghi made some mildly dovish comments but the Euro remained unfazed and the Yen went on to make 200 pip gains that day. The US employment numbers posted more positive numbers in that afternoon. On Friday morning, the British monthly manufacturing figures and the goods trade balance missed the expectations but the week closed positively with the Canadian unemployment declining to 7.1% from 7.3%.

EUR/USD has gained more than 600 pips in the last several weeks, partly due to Euro strength and partly due to Dollar weakness. It hit the low at 1.0820s a few weeks ago, but the ECB and then the FED played their part in sending this pair to 1.1450s. This week, though, wasn’t that straightforward. The buyers couldn’t break the resistance at 1.1450s. As you can see from the weekly chart below, this is a long-term resistance. So, this week´s candlestick closed as a perfect doji which signals a possible reverse. On the daily chart, we see that in the last six trading days the buyers and the sellers have been in a constant fight. The price has been going up and down in a 100 pip range but every day has closed around the opening price. We´ll see in the coming days who will have the power to send the price their way. 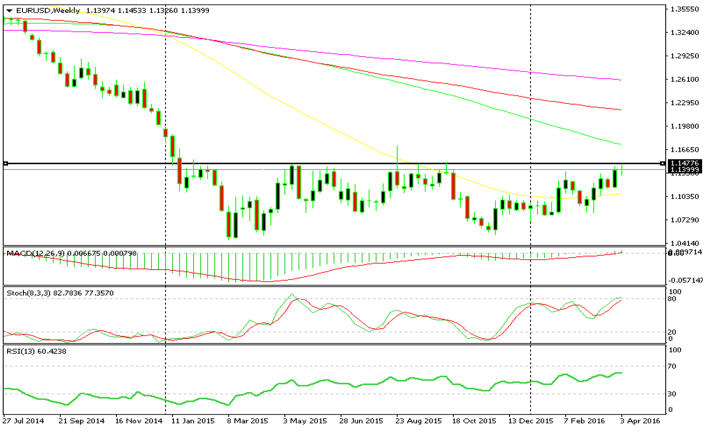 The weekly candlestick closed as a doji 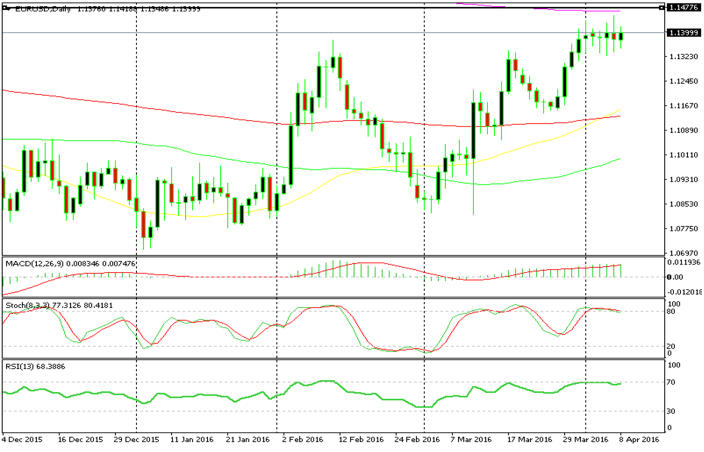 USD/JPY had another wild week. If we look at the weekly chart below, we can see that this week´s bearish candlestick is about the same in size as the first two weekly candlesticks of early February. The price broke below the downtrend line, but the 100 smooth MA in red held in the first attempt. That MA in the weekly chart comes at around the same level as the 200 MA in the monthly chart. This MA held on well also, and since there are two MAs at the same level in larger time frames, this level becomes a strong resistance. With the way this pair has been behaving recently you can never rule anything out, but the lower it moves the higher the chance of the BOJ intervening are, either by monetary policy or direct fx intervention. 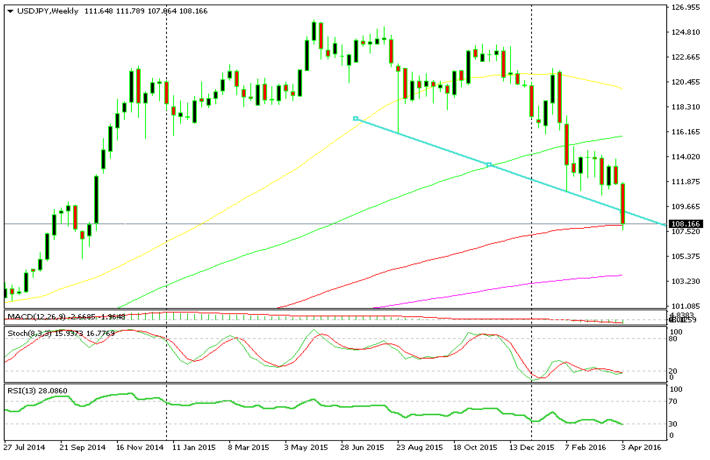 This weekly candle looks similar to the candles in early February 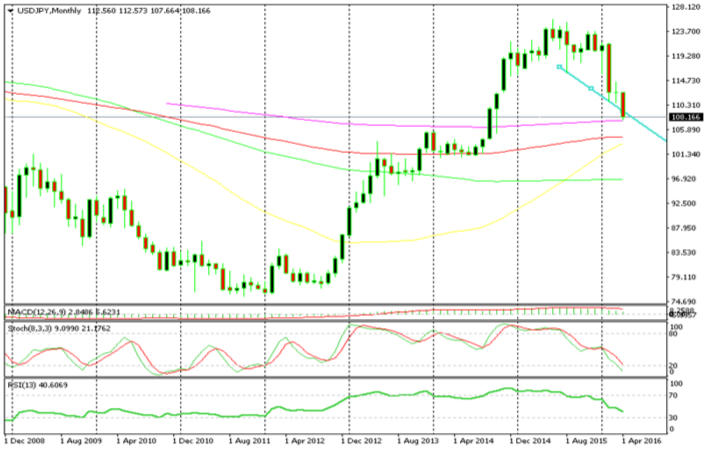 The price stalled at the 200 MA

Well, the first week of April was definitely had us on our toes. The Yen pairs calmed during March after the extreme volatility in the first half of February. But, this week the volatility picked up again and we saw some huge moves in Yen crosses worth several hundred pips. USD/JPY is approaching levels which are making the Bank of Japan very likely to take action. Next Monday, the FED will make an unscheduled announcement, so we´ll see if they will keep their dovish global economic viewpoints.