The US Dollar has been suffering lately, but this week the currency fought back. We mentioned last week that the downtrend has come to a halt since the buck closed the week unchanged against the majors. A key sign of the reverse was the doji weekly candlestick in EUR/USD and currently the USD is about 200 pips up against most currencies. USD/CAD is nearing the lows, though, because the petrol-producing countries are meeting in Doha this Sunday and the possibility of a deal concerning production freeze has sent the petrol prices up above $40/barrel. We made 318 pips this week so, all-in-all, it´s been a great week for us. 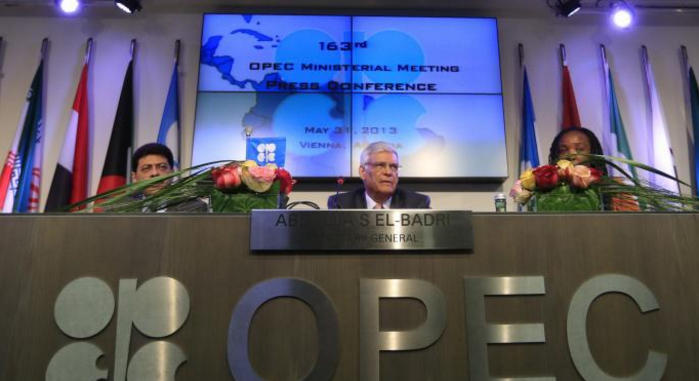 Last week, we had a drawdown with our long-term USD/JPY forex signal, but this week we´re back in the game. We didn´t start the week off very well, however, we still ended with a 318 pip profit. The profit would have been about 130 pips larger if we had closed the NZD/USD and the AUD/USD pairs manually on Monday when they both were 1 mere pip away from take profit. But the price reversed and hit stop loss. Also, if we had let the EUR/USD sell signal run longer we could have sat on an extra 120 pips, but we chose to close this forex signal manually at 1.1350s, since the 1.1330-50 level has held the price above during the last two weeks. But it didn´t this time and EUR/USD slipped to 1.1230s. That´s 250 pips missed in total but we made 318 pips this week anyway… so we can´t complain! 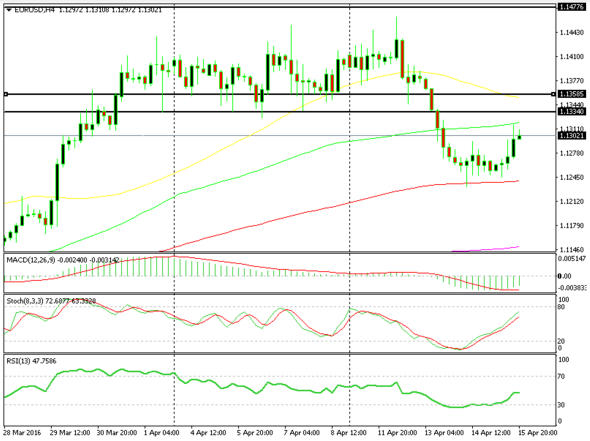 The US Dollar has been on a downward spiral in the last 5-6 weeks. The market perception that these extreme ECB measures would be positive for the Eurozone in the long term sent the Euro up and the USD down in the beginning of March. Then, the FED turned dovish and the USD felt another wave of sellers joining in. The FED chairwoman Yellen reconfirmed the dovish comments a week later in a conference in New York, which put even more pressure on the Buck. USD/JPY slipped to the 107.60s last week, and so the USD started this week with a negative feeling. On Monday, USD/JPY revisited the lows from last week and EUR/USD kept banging its head against the 1.1430-50 resistance level. It finally broke at 1.1450, which is the top of the resistance band but after only climbing 17 pips above it quickly returned below 1.1450. This shattered the hopes of EUR/USD bulls and since then the price has only declined. It fell as low as 1.1230s but hasn´t been able to push further down. It seems like the 1.1300-30 area has now turned into resistance. Even USD/JPY moved more than 200 pips up off the lows. The OPEC and non-OPEC petrol-producing countries are meeting this Sunday in Doha, Saudi Arabia to discuss measures on production, and thus, the petrol price has been well supported. WTI broke above $42/barrel on Tuesday but closed the week in the mid-40s. The Canadian Dollar has benefited from this and on Tuesday USD/CAD fell to 1.2750.

The only important data on Monday came from Asia; the Japanese core machinery orders fell 9.2% – but at least it was smaller than the expected. The consumer inflation in China came out below expectations but the producer inflation beat them. The inflation numbers on Tuesday in UK were a tad brighter. The headline number for the year came out at 0.5% against 0.3% expected while the core inflation came out at 1.5% against 1.3%. The consensus for the US import prices was predicted to be 1.0% but the real number was 0.2% for last month. On Wednesday, the US producer inflation posted some negative numbers and the retail sales declined by 0.3% as well. However, the core retail prices remained positive at 0.2%. About an hour later, the Bank of Canada left the interest rates unchanged but with dovish statements. The US crude oil inventories posted a huge increase of 6.6 million barrels that day. On Thursday morning, the Australian employment change numbers came out above expectations and the unemployment declined by 0.1%. The BOE MPC rate votes remained unanimous against as widely expected later that day.  That afternoon the US monthly inflation numbers missed the expectations by 0.1% but fell further once again and balance was restored. On Friday, we finally had some good news from China; the industrial production and fixed asset investment numbers beat both expectations. In the afternoon, the US empire state manufacturing index came out at 9.6 points against 2.1 expected but the consumer sentiment missed expectations.

We pointed out last week that the weekly candle in EUR/USD closed as a doji, which is a sign of reversal. We can see from the weekly chart below that this week´s candle is a bearish one so a reverse seems to be taking place. Looks like the long-term resistance of 1.1450 was too strong for the Euro bulls. On the daily chart, we see that the price oscillated from 1.1330s and 1.1450, but at the end of the day, it closed near the opening level meaning neither the bears nor the bulls had the nerves to break the range. That lasted until Tuesday when the Bulls had a final push, breaking 1.1450 but the 200 smooth MA stopped them and they finally gave up. Then the bears took control and sent the price down to 1.1230s – where the 100 smooth MA in the H4 chart was waiting. It stopped the slide and the price started to go up again, but the bulls couldn’t take the price above the simple MA in green. Therefore, these MAs are the two levels to watch in the short term. 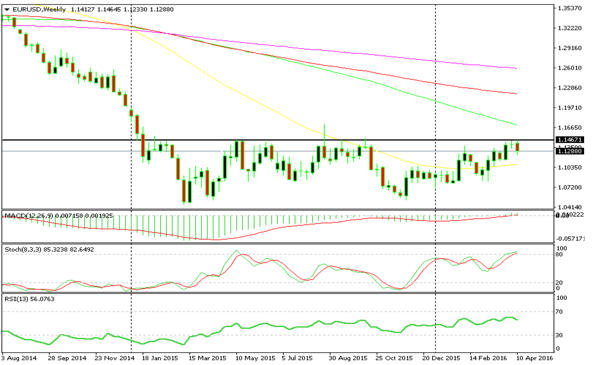 The 200 smooth MA topped the uptrend

After a 20 cent decline in the last few months of 2015 and in January this year, GBP/USD finally stabilized and in the last three months, it has been trading inside a range. The range is getting narrower – and as we can see from the daily chart the top and the bottom trend lines are forming a triangle. With the UK referendum coming up in June the chances are that the breaks will happen to the downside. That said, the referendum might already be priced in and if the polls show an increase in the number of people who want to stay in the EU, then the upside trend line will be vulnerable as well. On the H4 chart, the 100 and 200 MAs are limiting the upside moves so we´ll keep an eye on them too. 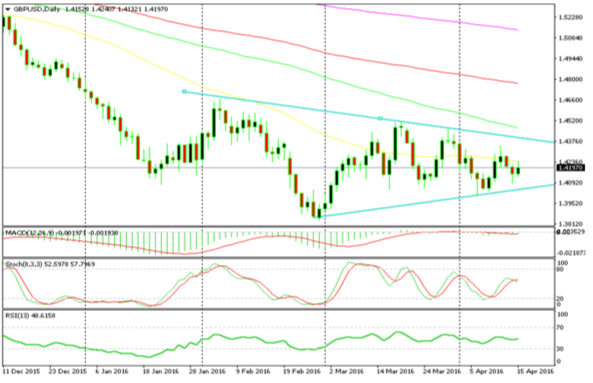 The two trend lines are forming a triangle 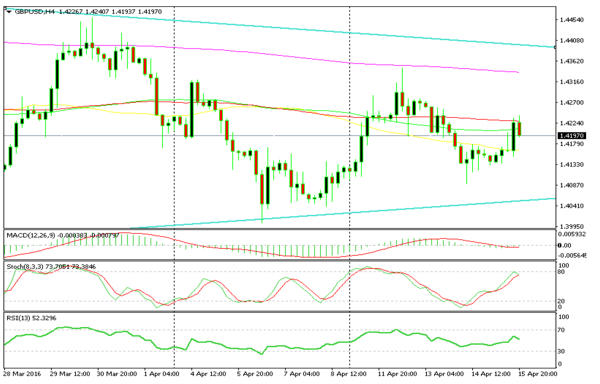 This week, the US Dollar managed to put up a fight. We can´t be entirely sure if this is a real comeback because it´s too early to tell but the 200 pip appreciation sets a bullish tone for next week. We also had a very good week with our forex signals. The petrol producers are holding up a summit this Sunday, but personally, I´m skeptical that they will agree on anything meaningful. If they do, then the CAD will benefit and if they don´t we will seriously consider opening a buy long-term forex signal in USD/CAD. The ECB monthly meeting and press conference are scheduled for Thursday so we´ll see if they´ll attempt to talk the Euro down.